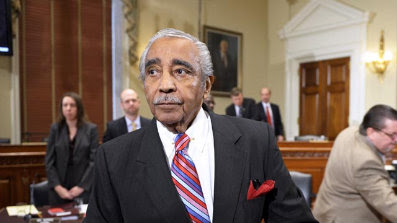 The full ethics committee will next conduct a hearing on the appropriate punishment for the former chairman of the Ways and Means Committee. The committee will then make a recommendation to the House.

Possible punishments include a House vote deploring Rangel's conduct, a fine and denial of privileges.

The eight-member ethics panel had sat as a jury to judge Rangel's conduct. The 80-year-old congressman from Harlem was charged with 13 counts of financial and fundraising wrongdoing.

(Now think back to primary night when all the corrupt Dems stood on stage with him. Including our next governor and those who would like to be our next mayor. And don't forget about that lavish fundraiser...)
Posted by Queens Crapper at 12:10 PM

Damn! What does a CONgressman from Queens have to do get the same treatment? Sheesh! What am I? Chopped liver?

PS Would I look good in an orange jumpsuit?

so when does the IRS prosecute him?

No problem Bloomberg and the new governor will get him a get out of jail free card.
Politicians like presidents never get jail

Gary A. said...
PS Would I look good in an orange jumpsuit?

"so when does the IRS prosecute him?"

They'll just put a lien on his estate. How much longer do you think he'll live?

Tell that to Brian Mc G and Seminerio.

All that taxpayer money wasted so he can get a little slap on the hand and a letter of reprimand in his file. What a waste. He should be in an orange jumpsuit and behind bars.

Possible sanctions include a House vote deploring Rangel's conduct, a fine and denial of privileges.

What exactly does this mean?

What is denial of priveleges mean?

The IRS is not going to proecute him because he filed corrected tax returns and paid all his taxes plus interest and penalties. That case is closed.

When the taxpayer comes to the IRS before they come to him it is almost always handled as a civil case.

You could argue that in this case Rangel only came forward because the NY Post outed him but he did make it to the IRS first and the case was closed with interest and penalties paid.

If any of us failed to pay taxes, we'd be in jail. Nothing will happen to him and he'll be handed another landslide in the next election courtesy of the morons in his district!

The only way we'll ever get rid of him is if someone drives a stake through his heart (if he has one). This guy is completely self-absorbed and only cares about himself and his wealth. Real estate everywhere and thousand dollar suits. What a disgrace he is.

My Guess is Rangel will walk with perhaps a small court fee fine and suspended sentence. Not much different then that ex cop who carved up his girlfriends face.

People forget in states like NY and Ca we have a totally F_up, lib hi-jacked and corrupted legal system NOT a justice system.
Ask any retired or fed up cop who recently tossed in his badge on a bosses desk!!

2 million dollars lighter (who's money?),Charlie does his shuffle.

People here are going on about our screwed up justice system.

Sorry to tell you this has nothing to do with the criminal justice system, Rangel has never been charged with any crime.

This proceeding concerns violating reporting and ethics rules of the House of Representatives.

The highest possible penalty is expulsion from the house.

Why don't you post the article about Vito Lopez in the Daily News yesterday and his role in closing city Catholic schools?

Because this blog, quite literally, has gone down the crapper. I'm sick of seeing stories about murders, car thefts, and other things that headline on Channel 2 news.

Rangel should be flogged (I'm serious)

what about ackerman, stavisky, sampson, smith, et al...
when will they be prosecuted?

Yes I'm all for flogging and vigilantes when the feds and DA cant do there job !! These F_ckers and their buddy system have run a muck and unchecked too long.

"The tree of liberty must be refreshed from time to time with the blood of patriots and tyrants. It is it's natural manure"
- Thomas Jefferson November 13, 1787

If it was you are I, they would cut our balls off.

"Why don't you post the article about Vito Lopez in the Daily News yesterday and his role in closing city Catholic schools?"

Actually, I am planning to post that. And why haven't you started your own blog yet?

Rangel isn't necessarily going to be expelled from the House. He could get off with a reprimand and lose none of his power.

^ he will lose most of his power one way or the other in January when the new republican majority is sworn in.

Don't worry Charlie, even if the book is thrown at you, the dumb Harlem voters will continue to reelect you.

Rep Joe Crowely is on the hot seat what happened with his investigation?

Rep Joe Crowely is on the hot seat what happened with his investigation?

Rangel's punishment? give me his rent controlled apartment. thanks Charlie

My goodness! A politician with no integrity? What is this world coming to?