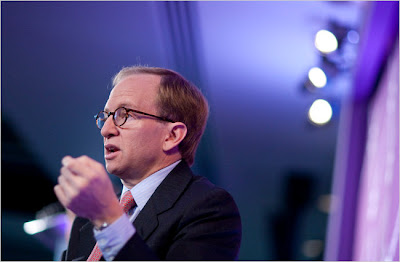 Steven L. Rattner, the financier who oversaw the federal rescue of the auto industry, was formally accused by New York’s attorney general, Andrew M. Cuomo, on Thursday of engaging in a kickback scheme involving the state’s pension system.

On the same day that Mr. Rattner was being celebrated on Wall Street for his role in turning around General Motors, he found himself embroiled in a bitter public battle with Mr. Cuomo, he settled similar charges with the Securities and Exchange Commission and he escalated a separate legal fight against his former investment firm.

Even as a resurgent G.M. went public again in a huge stock sale on Thursday, Mr. Cuomo sought to banish Mr. Rattner for life from the securities business in New York.

The civil fraud claims, which Mr. Rattner fiercely contested, came within moments of news that the financier had settled a related dispute with the S.E.C. In that case, Mr. Rattner accepted a two-year ban from certain Wall Street businesses and, without admitting or denying wrongdoing, agreed to pay a $6.2 million fine.

Mr. Cuomo, New York’s Democratic governor-elect, is seeking stiffer penalties, including $26 million. While other major figures in the pension investigation had already resolved their cases and Mr. Rattner had been expected to reach a settlement with the S.E.C., the charges from the attorney general’s office amounted to a public showdown between Mr. Cuomo and a man who is not only a prominent figure on Wall Street but also a powerful Democratic fund-raiser.

Funny how Bloomberg's connection to this creep was completely omitted from this article.
Posted by Queens Crapper at 10:40 AM

The Times sold their soul years ago to Michael Bloomberg. They makes this sound almost like it could be a vendetta on the part of Cuomo, which it is not.

Steven L. Rattner is staining his pants thinking about forking over a greater sum of money. Rattner has worked for the Times as a journalist and has powerful friends there which perhaps now hurting him in the world of politics. There are a lot of bones rattling around this guy and folks sense blood and going after him big time.