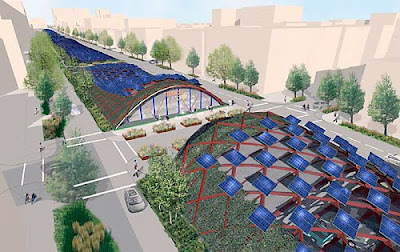 Designers unveiled three ways to tame the cavernous Brooklyn–Queens Expressway trench on Monday night — but city officials are already expressing concern over how to pay for any scheme bold enough to “fix the ditch.”

The three concepts are part of an Economic Development Corporation-led plan to reconnect neighborhoods balkanized by the Robert Moses-built highway, including Carroll Gardens, Cobble Hill and the Columbia Street Waterfront District — a portion of the area whose very existence was spawned by the roadway’s creation.
Brooklyn Bridge Realty

The cheapest plan, about $10 million, involves a massive tree-planting effort along the highway-created chasm — creating one of the greenest stretches in all of Brooklyn.

Another option calls for the construction of six, lightweight bicycle and pedestrian bridges over the ditch, costing between $20 million to $45 million.

And the most expensive plan calls for the construction of an iconic, $85 million, energy-generating “green canopy” along the length of the trench, from Atlantic Avenue to Hamilton Avenue.

Well isn't it nice that Brooklyn gets all the love?
Posted by Queens Crapper at 12:25 AM

As someone who lives three blocks from the ditch, I can honestly say that I'd rather have the ditch than that thing.

Brooklyn gets love because it has a loudmouth named Marty who brings attention to it. Perhaps we need a Marty, too.

I thought we were so broke we have to close firehouses at night, are reducing library hours, driving on streets compared to the surface of the moon, and asking all agencies to do more with less? We now have the money for this?

They should go maximum green and sound barriers and do the same throughout NYC.

All of the posters are right. Where is the city getting this money? And Marty is always loudly proclaiming his ideas and needs - it works for Brooklyn and grandma of Queens is invisible. Although I like the idea of the canopy hiding the highway, it cost to maintain annually is prohibitive. They could build 1 or 2 pedestrian bridges to cross to the other side - to reconnect the neighborhoods. Let the people from the public housing side beat up the investment bankers from Park Slope, ha ha ha!

Booklyn gets all the love because they work together, and keep the boys on their toes.

In Queens, by contrast, people only work together when its offically sanctioned events and that is sponsored by the machine to keep everyone in line.

Working together at the grassroots level in Queens?

Anyone less than laudatory towards a developer or politican is immediately reported back for a few coins.

I thought we were so broke we have to close firehouses at night, are reducing library hours, driving on streets compared to the surface of the moon, and asking all agencies to do more with less? We now have the money for this?

That's what I was going to write too.. Bloomturd is cutting jobs left and right..and yet they are spending money for this design?

Spending money for this pointless thing is only when there is a surplus and they think it's for the good of people there. When you are in debt, you cut back and hold back spending.

No wonder why the government is in deficit, they lack money managers who really know how to manage money... even if they have a surplus now, they will be broke 10 year later by the lack of common sense management of money.

Blumturd is in control because you let the party bosses tell you he is the best thing for you since, well income tax.

And you bought it.

But since you return the Dickheads to office by 80% or 90% they do what they damn well please serenely confident that there is nothing effective you will do short of pointless grumbling on this blog.

I dont get how this addresses the issue. How does putting up a large structure that you cant access, fix a torn neighborhood????

The ONLY way to restore and area like that is to completely deck over it. Anything else will only make it worse.

They better spend money to replace all the deteriorated brick along the walls of the trench. Actually, let's just wait for a section to collapse.

This will never happen.

The ONLY way to restore and area like that is to completely deck over it. Anything else will only make it worse.

Wow. How high are you? Enclosing the BQE? OMG high-larious.

I guess the Wall Street lawyers who live in this area have some clout, wouldn't ya say?

Or maybe they have something on Bloomberg and it's payback time, BABY!

Son of a ditch!

I like the expensive proposal. It makes the most sense in the long run.