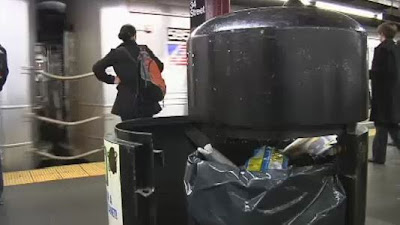 Contractors and in-house teams bait track areas. Cleaners remove more than 90 tons of garbage a day. And riders leave tons where it belongs. But a lot ends up on the tracks as a feast.

"Do they see the problem getting better worse or better? They'll tell you it's getting worse," Perkins said.

One ongoing problem is that garbage bound for the trash train waits on platforms or in transfer rooms. The MTA has sealed openings to block rats. But Perkins would like the rooms to be baited routinely. The agency is studying it. He also thinks he has a broader answer.

"We recommend to them what we know is taking place in other places, like Washington, DC, other countries, where food is outlawed on the public transportation system," Perkins said.

It's a tough call where food vendors supply rental income. But Perkins is taking his case to the platform.

"Should we stop eating on the subways and the buses?" asked Perkins.
Posted by Queens Crapper at 12:03 AM

European subways serve food, drinks, even alcohol, yet they're spotless and I've never seen a rat. MTA: ur doing it wrong.

Problem is the poor in this city often have to work 14 hour days just to stay afloat. They have no other time to eat.

Unfortunately, many people riding the subway eat food, personally I find this obnoxious and gross. Popeye's smells bad enough, but wait till people start eating Durian fruit on your commute. That's almost a chemical attack, thats how bad it smells.
But besides the smell issue, poverty is no excuse for slovenliness. Many people don't just use the subway as a dining room they also use it as a trash dump. I say ban the food. I wont miss it.

Yes ban the food on the train or at least eating on there. And bloomberg your wrong to say theres rats in most big cities. Thats laughable. Boston, Baltimore, and Chicago have some rats but nothing like here at all.

Agreed European subways are much cleaner because they maintain their infrastructure, but don't point that out here cause the breitbart fans will start screaming socialism or make bad baseless assumptions.

There's also roaches on the buses..eeeew!

observe how third world people throw food garbage, wrappers, cups into not just the subway but onto the street. This is a Roosevelt Avenue daily occurrence, a Mexican mother encouraging her jackpot babies to dump uneaten food parts on the ground: mango stick, corn husk, ice cream cup, the napkin they used, is crumpled and tossed gleefully on the ground.

If you say something to them about it they will be so offended.

You, the American, is in the wrong.

Eating on the subway is just gross. Who would do it?

Yes, we should ban food on the trains.

Who the hell even wants to eat food when you are in a dirty tunnel?????

European subways are nice because (1) most of them are newer and (2) Almost ALL of them close for 4-6 hours a night, providing lots of time for maintenance.

NYC has one of the worlds only 24/7 systems, not to mention one of the most extensive, and this is the price we must pay for it.

I do this sometimes, with whole nutmegs rather than cheese nips. Much better chance of actually killing the rat, and environmentally sensitive since nutmeg doesn't attract additional vermin.

It's true, eating in the subway is disgusting. All open food should be banned and summonses liberally distributed. While candy wrappers and soda cans are bad enough, it is not unusual to see people eating CHICKEN and discarding the bones on the floor of the subway car! I am personally offended when some slob starts in on his McDonald's meal next to me, even if the trash doesn't end up on the floor, simply because it stinks. We live amongst some of the most primitive, vile, selfish creatures imaginable and the only way to get them to shape up is to punish them or drive them out of the city. The point about European subways being closed overnight for cleaning is completely accurate. I would add that for with the exception of a few, such as London, the NYC system is older and much closer to street level.

A free market solution to eliminate rats: a bounty for each dead rat you bring to either city hall or one of borough halls.

They should ban people eating meals and carring coffee onto trains and buses.

Allow water, but that's it, I am tired of these folks spilling it on me, on the floor, the bad smell, disgusting way they eat so close to others and what they eat - fine em already!

I was under the impression that it was already illegal to have open liquid on the train and busses yet I see it all the time. I've even carried my coffee on the train my self some mornings. If the MTA and NYPD doesn't have the staff to police the existing laws how can we put more on the books and expect them to get enforced?

It is already illegal to consume any food on the subway whether it be coffee, a bagel, Mcdonalds or Chinese Food. The problem is that the law is not enforced. The law was originally created around 4 years ago, not to curb rat food but so people riding the train would not have to deal with the smell of food next to them or pieces flying onto them not to mention the people that abandon there food waste against the bench seat.
Maybe the police should enforce the law that is existence. I know that I for one would rather see people getting tickets on the train for eating and that money being funded to the MTA rather then see my fare raise.

NOBODY ate in the subways 20 years ago.