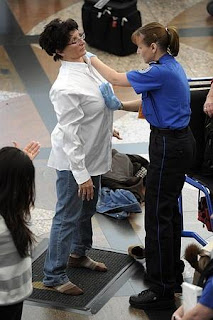 Have you ever had a dream where you were standing in front of a group of strangers in your underwear? The next time you fly, you’re likely to be left in less than that. Last month, the Transportation Security Administration began installing full body scanners at our local airports. These scanners virtually peel away your clothing and leave you stark naked to an employee who may, or may not, have had a background check.

Many New Yorkers have told me that they are willing to check their dignity at airport doors in the interest of safety. But, did you know that the safest airport in the world — Ben Gurion International in Tel Aviv, Israel — refuses to purchase these scanners because they don’t work? In the words of the former chief security officer of the Israel Airport Authority, Rafi Sela, he could “overcome the body scanners with enough explosives to take down a Boeing 747.” This is not surprising. These machines can detect guns, knives and box cutters, but they cannot pick up materials, like plastics, liquids and powders, most frequently used in attempted post-9/11 airplane bombings.

So, how did these ineffectual strip search machines, which will leave your Grandma longing for olden days when a glimpse of stocking was shocking, end up at JFK International and La Guardia airports? The answer: TSA incompetence and very powerful lobbyists.

Isn't that how we get most everything these days?
Posted by Queens Crapper at 12:39 AM

The feds prosecute Arizona for enforcing it's own law to determine if a suspect is an illegal alien, but turns around and gropes legal people for getting onto an airplane.

Very sad. Good thing the WWII vets are dying off. They would never have stood for this.

Why do we have to travel so much - in another 40 years or so airflight will be curtailed - each year the contrails at about 1% to global warming and are are terribly inefficient way to travel from an energy standpoint.

It is all but impossible to add security to air travel and as those bastards get more efficient we are going to see more and more attenpts over time.

The day of air travel has passed.

If these machine don't detect the very things the are suppose to protect us from then:

- who were these criminal lobbyists that pushed this agenda?

- how much did they make of our tax money?

- who in Congress allowed this?

- why are these people not in jail?

It's not for nothing that Israel & Israeli's survive and thrive - they have the best and ultimate security systems in the world Our Government should have evaluated what they use.

It was under Bush that the TSA was created in the first place and later made a subdivision of the DHS.

The actual outcry should have happened in 2002 and maybe we wouldn't have to put up with an utterly ineffective and superfluous $60 billion agency now.

Having said that, it's equally disappointing to see how our current president hasn't stepped in and interceded.