SkyView Parc is really Mussed up! 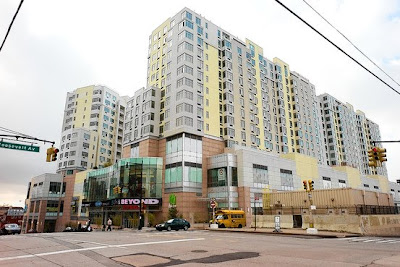 In one of the largest cases of buyers remorse in New York, scores of people who agreed to purchase apartments in a new development in Queens filed suit Monday seeking the return of their deposits.

The suit, filed in federal court in Brooklyn, could throw a wrench into the marketing efforts of Sky View Parc, a huge shopping center and condominium development that is planned to eventually include nearly 1,100 apartments in six towers.

The complex is a few blocks from the heart of the Flushing commercial district. It has been controversial because of its size and the impact it might have on local business and traffic.

When the development was first marketed in 2008, prices ranged from $385,000 for studios to more than $1.2 million for three-bedroom units on a high floor. Some prices have been raised slightly and some trimmed slightly since.

The complaint was filed on behalf of 67 would-be buyers in contracts to buy 41 condos. The complaint said that buyers wanted their money back because they were unable to obtain loans after the "collapse of the mortgage market" and were unable to close.

Their lawsuit said that the developers failed to file a disclosure statement. Such a statement is required in large developments under a federal law enacted in 1968 intended to help protect buyers from fraud in new real-estate subdivisions.
Posted by Queens Crapper at 12:47 AM

I really like that picture it must have been photoshopped. There is no traffic jam at Roosevelt Av and College Point Boulevard. I don't think I have ever been down there and seen the road that open during the day.

As for Sky View Parc just knock it down. There is already too much congestion on the 7 train and the roads. Build a real "Parc" and really benefit the community.

The place, the concept and the location is all suspect. Obviously this project was conceived and built smack dad in the middle of the biggest housing bubble ever. The building was targeting overseas investors from Asia whom obviously did not think much of the overwhelming smell of the much the buildings sit in. A so called luxury building which a major train line clanks by, sit on a downscale BJ wholesale store, what investor would buy there? The building was also hoping to attract young Chinese couples and families but the building sits in the middle of a commercial zone surrounded by cement factories and garbage barges that insult the intelligence of any Chinese or any buyer of any origin for that matter investing in this project or living here.

College Point Blvd. is a hardscabble street of live poultry hawkers, down scale supermarkets such as Western beef, neighbors to a 24 x 7 Home Depot and lots of individual little factories spewing out iron products, awnings, windows and doors.

If upscale means being close to your business in one of the many arcades selling socks and plastic toys on Main Street then you really need to be selling quite a bit of socks to purchase in this building.

How did this get Community Board 7 approval?

The complaint was filed on behalf of 67 would-be buyers in contracts to buy 41 condos. The complaint said that buyers wanted their money back because they were unable to obtain loans after the "collapse of the mortgage market" and were unable to close.

Unless they had some totally messed up contract and stupid lawyers, failure to obtain financing is valid reason to break a contract to purchase and get your earnest money back.

How did this get Community Board 7 approval?

Are you new to the Flushing real estate scene?

Why would Old Navy move from Roosevelt and Main street to this place?

And even besides the traveling has anyone been inside that place? It's like ADX Florence Supermax.

What, people don't like the landing gears on a 737-800 scraping across the roof when there is some early morning fog???

Who cares if the Asians want to spend exhorbitant amounts of money to live on top of the 7 train and the asphalt plant, not to mention being in the La Guardia flight path! I grew up in Flushing, it used to be a beautiful neighborhood, but the influx of Asian immigrants has ruined it beyond repair

Regardless of my opinion of sky view, it's not sky view's fault that 67 people can't get mortgages. How did they have the down payments but can't get financing?

Is this a photo of Beijing?

Why would Old Navy move from Roosevelt and Main street to this place?

Sweetie, the new location of Old Navy is only 2 blocks from the old one, which was right on Main and Roosevelt, at the 7 train. If you can't walk the 2 blocks to get your Old Navy on, you've issues.

WTF? Let the buyer beware! Don't complain when greed investments smell like crap. Stop whining, and shut up! Your deposit was for Luxury, not first time homeownership. Who are you? Homeless People wonder.

Sweetie, the point is that more people pass through Roosevelt and Main while switching from subway to bus than head over to Muss.

The distance from the previous old navy to the new one far exceeds 4 city blocks.

The draw is the other stores there, and I'm sure there were incentives for Old Navy to relocate. ie: cheaper rent, destination shopping instead of one-stop.

.3 miles is more than 4 blocks in most neighborhoods.

And you have to walk past the projects to get there from the train. Good luck with that location!

People, please don't use your ass to think. If everything are completed, do you know how much would be for a two bedroom apartment. Do you know how much the luxury buildings are selling in long island city. Think the future, stupid.

LIC isn't built on the edge of a cesspool. There's no comparison.

I see King Wai has commented elsewhere on the web about how visionary SkyView Parc is. He thinks it's the Hong Kongization of America.

That's exactly the problem. This is America, not Hong Kong, nor any other overcrowded homogenous looking Asian city. Let's keep it that way.

"LIC isn't built on the edge of a cesspool."

"LIC isn't built on the edge of a cesspool."

Wait until the next New Madrid quake when a third of Queens turns into quick sand.

1939 World Fair they opened up the Flushing River to deliver exhibits by boat. 1964 they buried the river to truck exhibits in and renamed it Flushing Creek. Curiously, this made the River stop flowing and stinking up... and flooding! Then they wanted to put canal locks in the bay to make if flow again. Now they want to open the River up again! Such Kidneys!

I assume all of us are not rich, means we dont have more than 10 millions, let's say. Now, I am wondering why? why the muss and onex, the developer would do a such big project like this in flushing? I lived in flushing more than 10 years, I know many people think chinese are nasty or uneducated (my opinion), but within this 10 years, flushing become a second china town because of the Chinese work hard and they also willing to take risks. Now, flushing main st are full of Chinese stores and many of them are getting bigger and bigger. Think about business, do you think this area will get worse? I know more commercial businesses are coming, so I am very strongly think flushing has a big potential for investment. That may be a main reason why Onex get involved. I know what you see now is not so great. But, compare 10 years ago, this place changed alot. I can see it. Especially Asian people can vision. Agree? so how about another 10 years later?

One of the conditions of building this should have been for the developer to kick some money in to repair College Point Blvd. It has to be one of the worst roads in Queens for 10 blocks in either direction from this place.