More of Ridgewood calendared for landmarking 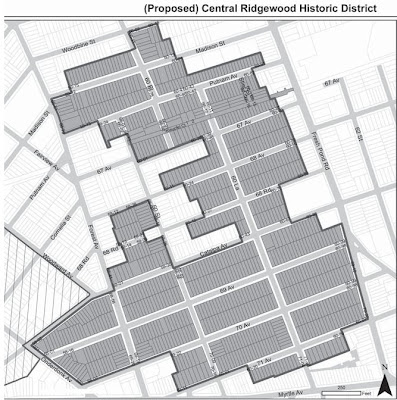 Having approved Ridgewood’s third landmark district two weeks ago, the Landmarks Preservation Commission (LPC) now has its sights set on a fourth district that, if approved, would cover more homes than all other landmark areas in the neighborhood combined.

The Times Newsweekly has learned that the LPC has “calendared” a review of the proposed “Central Ridgewood Historic District,” an area of approximately 940 brick rowhouses built during the early 1900s in the heart of the community. An LPC spokesperson told this newspaper on Monday, Nov. 8, that the agency that a public hearing on the plan would be forthcoming, but no specific date for it has been set.

...the Central Ridgewood district, if enacted, would protect more than three times the total number of buildings in Ridgewood landmark districts. Most of the structures in the proposed district are brick rowhouses designed by the architectural firm Louis Berger and Company and developed by August Bauer and Paul Stier between the turn of the 20th century and the mid-1920s.

Why? Easy explanation. The LPC is concentrating on landmarking rowhouses because they generally aren't targets of developers. They also can brag about the thousands of Queens buildings that they designated while the historic detached ones get torn down left and right and replaced with crap.
Posted by Queens Crapper at 12:05 AM

Very True !
Developers steer clear of these Stier row houses because many have common walls. Another words you cant take down 1 without acquiring the one next door.
This is what the old German told me and I never seen one knocked down. I own a Stier house on Seneca you can hear a TV next door.
This is a just a show by the LPC, note the big "H" in the center of that photo, those houses are different. some have allys

I have seen many immigrants bastardizing these Stier houses. These people paint the sandstone steps, replace the gates with nasty home depot brass and brick, paint the faux wood entry's pink and lime green.
Its been a disease happening in Lower Ridgewood (south of Myrtle) and creeping north.
The new Polish people for the most part take pretty good care of them take a walk up 60th lane