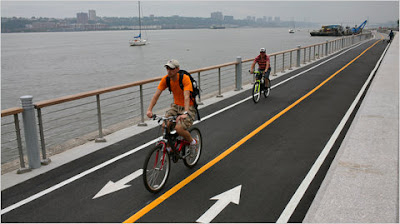 Now, after two and a half years and $15.7 million worth of construction, the promenade has been restored to the straight and narrow, giving the West Side of Manhattan a continuous bike path from the Battery to Riverbank State Park at 137th Street. With some inland detours, the path continues to Dyckman Street north of the George Washington Bridge.

To build the bike path extension, which is suspended over the water like a concrete bridge or boardwalk, workers had to sink 102 pilings into bedrock, 78 of them in the water, Mr. Benepe said. “It was incredible, the marine engineering needed,” he said. “That’s why this was an expensive and time-consuming project.”

Of the $15.7 million cost, $15 million was allocated by Mayor Michael R. Bloomberg from city funds, $400,000 was allocated by City Councilwoman Gale A. Brewer, who represents the Upper West Side, and $300,000 came from a federal transportation grant administered by the state.

“We were lucky to have a healthy economy, at least the first two terms, so a lot of money was put in to build this kind of infrastructure,” Mr. Benepe said.

That's funny, the entire time Bloomberg was turning down park projects in Queens and the excuse was that the City had to conserve money for the future. What he meant to say was that he would rather spend the money in Manhattan.
Posted by Queens Crapper at 12:10 AM

Can't wait to ride that on my Harley!

We cannot open the new Elmhurst Tank park which would serve thousands of residents and the illegals who hide here, but we can spend millions on something a few Manhattanites will use, if ever.

Proponents of the Manhattan bike superhighway have an almost religious zeal in lobbying that every mile be along the shoreline.

Meanwhile in our fair borough, power plants and private developments keep the public away from the shoreline.

And if Manhattan has a High Line, why can't the LIRR Rockaway Branch be transformed in a similar manner?

So...
us taxpayers are being bilked by bikers!

Can you picture all 5' 7" of Mike in black leather on a hog?

LTIS (laughing "til I shit)!

Another Reason to despise the Bicycle lobbyists

obama's union goons will spend this money in less than a week without even starting the work.

The longest stretches of inaccessible shoreline -- you guessed it, Queens.