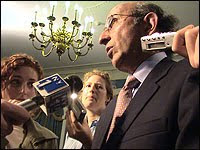 Back in March, when the city was still trying to get a handle on its education budget, City Councilman Robert Jackson noted that there were two different scenarios for the coming fiscal year: "bad" and "horrid."

Today, the education committee chairman said, there's only one: "horrid."

Jackson repeated that word at least nine times during the education committee's hearing on proposed budget cuts. He said the loss of $500 million in state aid would mean laying off 4,400 teachers, letting another 2,000 go through attrition, and eliminating almost 600 other support staffers and cafeteria workers. Which was why he wanted to know how Chancellor Joel Klein could justify hiring two more deputy chancellors who are each paid almost $200,000 a year, and giving raises to several more. He noted that there are now eight deputy chancellors.

Klein testified that one of those deputies is actually a new Chief Operating Officer and said the job is needed now more than ever because he's cut $38 million from central offices. The chancellor said another deputy is dealing with new schools and enrollment, and said the rest were given promotions. As for the raises, he called them "small adjustments" and said their salaries had been "out of line."

The chancellor insisted he had done all he could to protect classrooms from budget cuts. Several council members expressed great skepticism about his department's contracts with outside vendors at a time when it's projecting teacher layoffs. But Klein said the city retained a $5 million contract with The New Teacher Project to hire new teachers because there aren't enough with special education licenses to meet demand. And he said most of the city's other contracts are for special education services and busing that's legally mandated.
Posted by Queens Crapper at 1:26 AM

At the risk of being accused of not being on-point (who cares), I suggest listening to the reformed conservative Diane Ravitch interview yesterday (5-25)on WNYC's Brian Lehrer show:

Read her remarks on the Huffington Post (another reformed con):

The New Teacher Project receives 5 million bucks in a time of teacher layoffs, yet regularly issues papers and statements in support of Klein's policies. No doubt it's just a remarkable coincidence.

I'm sure this makes far more economic sense than, say, a 20K ad in The New York Times.

Why doesn't Klein mention how our charter school investors make huge profits on these schools? Maybe THEY can close the budget gap. Or maybe hell will freeze over..

Somebody should take the axe to Klein!
Fire that soft boiled egg!

Diane Ravitch isn't a reformed conservative. She's just an American education historian. She's played both sides of the fence in her long career serving both Republican and Democrat presidencies.

Personally, the more I hear her speak and read about her past works and critiques, I tend to question her use of reason and logic applied to the education system. I just don't understand how she can be placed on such a high pedestal in academic circles. *shrugs*

Klink:
If you read her latest book, she explains her change of heart regarding charters. She is the only one speaking out on behalf of public education. The unions and politicians are all in the pockets of the foundations who are behind the "reform"..

An anaylsis by Ravitch on what's occurred in our schools.

I didn't have to purchase her latest book to understand her change in the underlying ideology on the means to education reform. She does a good job in summarizing it during her public speaking engagements and book reviews.

It still puzzles me after such a long study of the history, she still really doesn't bring anything to the table. For instance like a Thomas Jefferson, Jean-Jacques Rousseau, John Dewey or even Objectivist educators of today. I'm left to conclude that perhaps she's not very relevant outside of the role as an historian.

Her relevance at this point in history is to bring out the truth about the charter school scam - in which she is doing a fantastic job. She has no hidden agenda and is telling it like it is. Educators around the country understand what she is talking about.

That doesn't give her academic background much credit or worthiness, does it? After all, couldn't an investigative journalist do the same? If anything, you just devalued her years of work on the subject.

There was a very telling statement she made in one of her speeches to an NYU audience, I believe, this year. She was asked by an attendee why the switch from supporting Charters to opposing Charters. Her answer astounded me. She said and I paraphrase, "I got caught up in the whole privatizing, No Child Left Behind world wind." I lost a lot of respect for with that one statement.

Charters aren't truly a privatization of the education system. If there's Federal and State money involved, which there is, it's a ruse. I believe it's a concerted effort to destroy the TFU monopoly and yet still have control of the funding while making the boogie man be the unethical robber baron capitalists.

Interesting though it is to hear criticism of a book from someone who hasn't read it, I'm afraid Ravitch's criticisms of charters go far, far deeper than your statement would indicate.

Whether or not charters are private is only one aspect. Another you fail to consider is the fact that, on the whole, they don't outperform public schools. Lately charter supporters have been trying to shrug that fact aside--they aren't all exceptional, and some public schools are.

Furthermore, charters are simply one part of the book. Another is the history that's gone into Michael Bloomberg make the choices he has, and it's fascinating.

You don't have to read the book, but you're dead wrong about knowing what's in it--you clearly do not.

I'm not criticizing Diane's book, Ms. Educator. I'm criticizing the person, specifically what she said at NYU. It was asinine, specially for an educated professional who served in prominent governmental positions.

One cannot fail to realize aspects of a subject that aren't in the discussion. I made no comments about her recent book, only her statement at NYU and her general relevance in the field.

PEOPLE, PEOPLE LET US NOT FORGET, HE IS BLOOMBERGS BITCH. HAVE A TEACHER CHEK MY SPLLING PLEAS......

What you said, exactly, is, "I didn't have to purchase her latest book to understand her change in the underlying ideology on the means to education reform."

But you show no evidence of understanding it at all. You oversimplify and misrepresent something she explained in great detail--and the factors I mentioned most certainly are part of her underlying ideology.

It's fairly easy to call people "asinine." And though I seriously doubt it, perhaps what you heard that day could have led you to that conclusion. Nonetheless, there is much more to this, and you're passing judgment without knowing the facts.

Your choice, of course.

Klink Cannoli said...
This comment has been removed by the author.
Thursday, May 27, 2010

If you're going to quote me, do it in full context, please.

"I didn't have to purchase her latest book to understand her change in the underlying ideology on the means to education reform. She does a good job in summarizing it during her public speaking engagements and book reviews."

I didn't feel the need to give evidence in understanding a very simple, terse and maybe flippant comment made by Diane. Nor did I misrepresent or oversimplify. She did it all by herself.

Of course it's easy to call someone asinine. I can very well do it to you. But I'll have to correct you yet again and point out perhaps a subtlety you seemed to have missed. I expressed my sentiments for the statement she made at the NYU affair as asinine given her credentials. And yes, as I admitted previously, this statement colors my judgement of her as a person.

For crying out loud, where are your powers of logic and reason?! You're not giving me much hope for finding intelligence with our public educators.

"You're not giving me much hope for finding intelligence with our public educators."

these are the unsustainable facts.

are taxpayers getting their money's worth?

the D.O.E. and the U.F.T.union and whore (kickback politicians) are a team to steal your earnings.

do not believe the left media reports that the leaders "may" " might" "possibly" lay off teachers.
it is all public relations hype.

with the constant shifting of pupils bodies from one
community to another, especially stable northeast queens, the hiring of new teachers is a must. more dues for the U.F.T. and more yellow school buses,with more bus union dues.

I suppose if I were in the habit of expounding upon topics about which I knew little or nothing, I too might resort to personal insults, stereotypes, and other such nonsense.

It's evident I can't help you with your reading comprehension, simple reasoning or your projections of crimes I've committed such as stereotyping and other such nebulas nonsense.

I'm sure you don't even realize your shortsighted singleminded thinking. Open your mind and you'll find life is more than protecting your antiquated academic system, your comfortable pension and your elitist kaleidoscope.