Looting one fund to save another 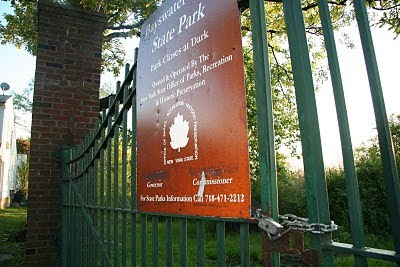 From A Walk In The Park:

In Bayswater Point State Park in Far Rockaway, the two gates were already padlocked last weekend. A small square sign affixed to a pole read, "Park Closed." The 12-acre park located on the south shore of Jamaica Bay in Queens is a popular spot for fishing and family outings.

"You gotta be kidding," said Rick Hill, 39, when told how much the state would save by shutting down the park. "That's ridiculous – I mean, to close a park for $5,000. That's not even money."

A father of four, Mr. Hill said one of the main reasons he bought his house five years ago was because it was next to the park. He also fears the closed park will become neglected and overgrown.

On May 14th, The New York State Office of Parks, Recreation and Historic Preservation announced it was accepting a $100,000 donation from Citibank to restore services cut last year at Long Island State Park as well as to fund summer programs in Westchester and Rockland Counties. The gift will also allow the swimming area at Zach’s Bay to extend its operating season through Labor Day.

There's no subsidized NYC company that wants to donate $5,500 so Bayswater can stay open???

Senior officials in the Paterson administration say Gov. David Paterson will introduce a bill Monday that would keep all New York parks and historic sites open for the year including the upcoming Memorial Day weekend.

But the officials say the Legislature will have to agree to take $6 million from the Environmental Protection Fund to pay for it.

The staffers say lawmakers in stalled budget talks as recently as Saturday insisted that a top priority is to keep the parks and historic sites open. Paterson sees the move as a way to address a chief concern he shares, but only with the corresponding cut he has insisted upon.

What a great idea! Let's rob Peter to pay Paul!
Posted by Queens Crapper at 12:50 AM

Thank God Gov Spitzer was elected, huh? He gave us the current Gov Patterson that enacted this selected budget cut. How much $$ does it take to keep a park open? Not much but here you go. How many NYS employees take a State car home every night unnecessarily? Where are the cuts to lawmaker staff salaries listed?

The real issue and question is what "closed" means. How and why does the state "close" outdoor forests, beaches and fields? Why are New Yorkers prevented from accessing this real estate? Because there is not a highly paid state employee there? Open the gates; let people in.

Exactly, Anon. There shouldn't be many issues to overcome to keep parks open to the public without funding or with reduced funding.

Gating parks now is a political maneuver to raise the ire of the public in order to force legislation like what's being considered currently.

And what's the big deal in raiding the EPF budget this year? So what if the State's ability to buy land is reduced temporarily. There are other higher priority issues to deal with. Let's get crackin' already, Congress!