Get in line, kids! 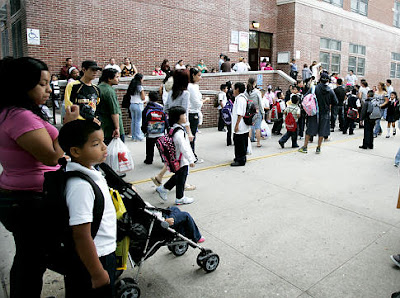 New numbers show Public School 143 in Corona has the longest kindergarten waiting list in the city, with 110 students.

The school, which has received three successive A's on the city's report card, is so popular it's already overcrowded with kids from the neighborhood.

The city Friday released numbers showing 980 kids citywide have been waitlisted at their local kindergarten. That's down from 1,885 originally waitlisted in March. But at PS 143 the situation worsened from only 23 students waiting for a spot.

It's a problem throughout the district in which the school is located, District 24, where 307 students are waiting to get into their local school - up from 162 in March.

The agency sent out alternative offers for waitlisted kids throughout the city. For PS 143 kids, they've opened an annex - but a neighborhood away in Elmhurst.

WRONG. IT'S TWO NEIGHBORHOODS AWAY, IN MASPETH. See, at first they promised it would be for Maspeth kids, but now the truth comes out... Same old story, and then they wonder why there is local opposition to new schools. BUILD THEM WHERE THE ANCHOR BABIES LIVE.

THANK YOU NICK "As Long as Its Not in Woodhaven or Glendale Where I am Running for Office" COMAIANNI.
Posted by Queens Crapper at 1:37 AM

Nick is running in the 38th Assembly District which does not include Middle Village. Let's keep our facts straight.

It's the same principle, though.

Why don't they build schools in Corona where all the illegals and overcrowding are? Why does taxpayer money need to be spent outside overcrowded neighborhoods and then more money to bus these kids elsewhere? Don't tell me there is no room. Ever hear of Eminent Domain? This would be a boom for Corona.

local schools to walk to is a no..no... then there would be no tax money for the yellow school bus companies to kick back to the loyalist party politicians in Queens.