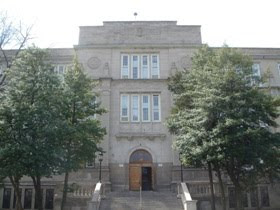 "The DOE has decided to dump 1,000 students into Bayside High School, requiring the school to use more trailers and operate at 180% capacity or more on at least a 12 period day.

Information obtained from the school's Leadership Team confirms that the DOE has increased the school's 2010-11 projection to 1500 students above its capacity and intends to increase the number of special education students in the school by 40%. Coming at a time of anticipated severe budget cuts, the City's plan will endanger Bayside's outstanding record of compliance with special education mandates and derail the school's efforts to reduce guidance caseloads to 200 students per counselor.

The school's recent initiatives to gain college accreditation for courses and establish new programs are also at risk due to the anticipated stuffing planned by the DOE.

"Although the DOE claims that high schools with 400 kids are ideal, they continue to load the high schools of Eastern Queens beyond the 150% mark. This community has been underserved for years. Don't our kids deserve smaller schools now?" asks one parent.

"This is becoming a great school. Why doesn't the DOE listen to parents and staff on an important matter like enrollment numbers?" asked another.

"They don't try this in Manhattan. The City thinks they can get away with stuffing these schools because immigrant parents don't complain" said another.

As the DOE continues efforts to close schools supposedly "saved" by a judge's decision by discouraging new applicants and offering current students in them transfers to Bayside, the Department is also now offering transfers into Bayside from other schools including Newtown, Richmond Hill, John Adams, John Bowne, Flushing, Springfield Gardens, and Grover Cleveland, among others. These efforts are expected to push Bayside even beyond the new higher projected figures.

Bayside, already operating on an 11 period day plus Saturdays, will have to drastically reduce the number of community groups using the building after school and weekends in order to cope with the new schedule. Currently, over 50 Bayside local community groups and schools use Bayside's gyms, pools, athletic field and classrooms after school and weekends. That number will need to drop as the school will need to schedule additional classes using these facilities.

The DOE is using deliberately fuzzy math in justifying the setting up of Bayside for failure, such as underestimating how many current students will return to show open seats which don't exist.

The Parent Teacher Association plans to meet with City Councilman Dan Halloran as well as with DOE officials to voice their opposition to any increase in student numbers and to push for a net decrease in the current numbers." - anonymous
Posted by Queens Crapper at 1:49 AM

P.S. Anyone want to bet on whether or not Halloran will wimp on this one?

"They don't try this in Manhattan".

Do the people of Bayside know about this?

So much for Bayside becoming a "CTE" school, bringing up its standards. Wait until Klein hears from me and a few other parents, who are born here and are fully informed and articulate. We are not "immigrants".

There goes the neighborhood---Bloomtard style.

Do you see what BloomKlein are doing? They are setting the school up to fail. Increasing the number of special ed, increasing the population of poor-performing kids, so that they can deem it a failing school in a couple of years and claim it must be shut down. And a few charters run by Bill Gates & company will take its place.

Bloomass couldn't give a damn what you say. He will do he's been doing all along with parents - ignoring them. Eventually a hearing will be held with the PEP and a few hundred parents and kids will voice opposition and you will all be ignored.

He just takes advantage of the vacuum your Queens door-mat civic culture gives him.

Go after your electeds? (we can't do that, you need to respect them)

Is this good for Bayside? I guess not, so Bayside has to take one for the team.

You beat me to it, Primadonna, but I'll repeat it for emphasis:

When test scores inevitably plummet, they will junk this school as they are doing with Jamaica High, and replace it with charter schools. That's BloomKlein's modus operandi. Lying scum!

LMAO... and they thought their communities would not be affected.. Well to all of you thanks for voting for the turd! he wants to pollute all of queens schools.. and once they start closing down schools where do you think the children are going to go?

Yep Pizza Bagel, the school is officially on a "death watch".

There actually IS a method to the madness.

They want ALL the schools in the city to fail. It explains the crummy curricula they put in place, increasing the special ed. populations in each school, getting rid of senior staff in favor of know-nothing rookies, ignoring teachers and parents concerns, decreasing resources, forcing co-locations of charters and public schools, etc.

They want to PRIVATIZE our schools so these hedge-fund creeps and billionaires can make $$$$$$.

An investment in a charter school gives the investor a 39% tax credit (New Markets tax credit)plus interest on loans. Money invested can be virtually doubled in 7 years.

And here we thought they just wanted to improve education in our inner cities. Silly us.

When has a wealthy person ever done anything for anyone, much less poor people, unless something was in it for them??

Every time I have to pass Bayside High School from 2 - 3 I always see a fight going on. I'll give you once chance to guess the race of the people fighting.

Umm...Bayside is not that great of a school people. Most ar ebused from Jamaica as it is. All the local Asian/Jewish kids go to the specialized High Schools.

Bloomberg has already done this to Long Island City, Astoria, Woodside, Maspeth, Ridgewood, Glendale. Now it's Bayside's turn. He wouldn't dump all these kids in Manhattan. His borough is off limits. If he did away with his Sanctuary City Policy, illegals would leave and take their kids with them and there would be plenty of room for American born kids and kids of legal immigrants.

The uninformed trolls are back.....Bayside is a fine school with a lot of good decent kids from all backgrounds, and quite a few from the surrounding neighborhood. The neighborhood is semi suburban. One reason they are targeting Bayside is that the DOE is already in the midst of ruining Francis Lewis High School which continues to be inhumanely overcrowded. It is still a good school in spite of this. The other reason is that the DOE (Bloombug & Co.) still wants all those other schools closed and they are routing kids AWAY from those schools which are still open due to the court decision. MY QUESTION IS: WHY AREN'T THEY DOING THIS IN STATEN ISLAND OR MANHATTAN? WHY THE OUTER BOROUGHS IN A MIDDLE CLASS BASTION? Good question, right?

re: why do this in a middle class area?
if you were a teacher ,would you rather work 180 days at a ghetto school or city/suburban school ?
pleasant area,more parking,safer,parent participation and pupils who study.

the U.F.T. union and D.O.E. and local politicians are a team.

This type of stuff doesn't just 'happen' out of nowhere. This has been in the works since last year. GET YOUR HEADS OUT OF THE SAND!! PAY ATTENTION! The Gov't of the City of NY wants to take away your right to public education. A dummer public is easier to take advantage of. Congrats - you all continue to prove them right.
Instead of 'blogging' - go to a rally, support your teachers union, be informed, read, understand. Otherwise, you, your kids, your jobs are all DONE!!!!

why should the property taxpayer support the teachers UNION? they are the goup that wants higher taxes and higher salaries/benefits for 180 days work per year.

most of the children of"elite"party loyalists are admitted into the special public schools in n.y.c.

Cardozo is already heading downhill and everybody in the area is trying to avoid it and avoid Van Buren and High School for Teaching. That leaves Bayside and Francis Lewis as choices. Now the DOE overloads them, provides them with inadequate security, makes them spend from their own budget to pay teachers for security guards and waits for the inevitable incident. After that, it's NY Post/ bad dangerous school/community rejects school/ outside kids flood in/more incidents/ time to close and charter. This should be a board game if it was not so predictable.

Damn, you people sound racist as hell. I just graduated Bayside in '05 and my brother is graduating this year.

Is the school overcrowded? Yes. Are there far too many periods and way too much workload for the employees? Yes.

But for God's sake, stop implying that because they let *gasp* COLORED PEOPLE into an otherwise fairly "white" area that the graduation rate will plummet. You know what the real problem is? It's not race, it's terrible parenting, and that issue has no color. Teenagers run wild because they've been allowed to, and it is NOT the teachers' job (though unfortunately it has become so) to teach these little anarchists basic manners. Good behavior and the desire to succeed begins at home, and when home is a place where they can do whatever they want, that translates into school. The sense of entitlement among teenagers is staggering and it accounts for almost all of the bad and ridiculously stupid behavior among teenagers.

I teach in Brooklyn, and if you think Queens kids are bad, you are sorely, sorely mistaken.