Fence ok for Central Park is "too dangerous" for Ridgewood Reservoir 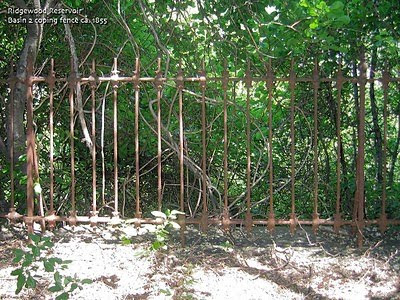 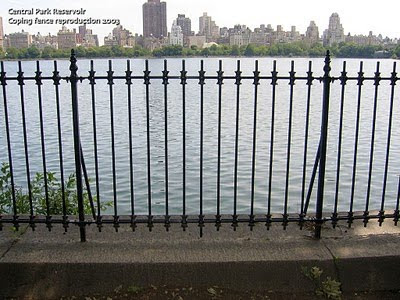 From Save Ridgewood Reservoir:

In a January 6th Daily News article, Kevin Quinn, director of Queens capital projects for the Parks Department, was quoted as saying that the historic fences at the reservoir needed to be removed because, the "spacing of the pickets no longer meets code as a guardrail." As far as I've been able to determine, the city's code requires that the spacing on railings be not more than 6".

There are two style of fences at the Ridgewood Reservoir. The first is a circa 1850s Hecla Ironworks fence that surrounds the central basin. In 2003, the department of parks had a replica of that fence created for the Central Park reservoir. The cost for the reproduction was $2 million. Here is a parks department 2003 press release about that installation. Welding Works, the company that built the fence received an industry award for the project.

The parks department was more than happy to spend $2 million to create a copy of the Ridgewood Reservoir fencing for Central Park. The same agency now wants to tear down the original, historic ones in Ridgewood for something that doesn't even try to look like a period piece. Why do you suppose they would do that? 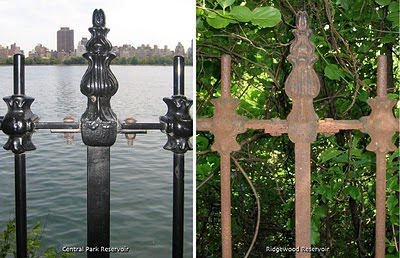 Posted by Queens Crapper at 1:18 AM

Apparently one of the prerequisites for working for the parks dept is knowing how to lie.

Honest Graft. Someone will get a fat contract.

Besides, as in keeping the Queens Plaza Millstones hidden in a box and not available for the community and that is just fine with everyone from the politicans to the civics and to the presevation community.

Look at Bowne House or the Keith's Theater, both well into their second decade as wrecks.

We all know that historic preservation in Queens is based on politics not common sense.

How about St Saviours?

Not only did that die with a whimper, but the people fighting for it actually had a hand in its dismantling and demoliton!

So the wisdom goes, name something after a Kennedy, and it will get the funding and attention it deserves.