Here's what preservationists worry about in Greenwich Village 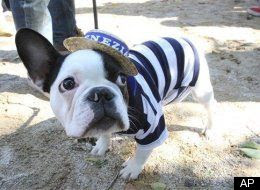 The protectors of the Village's historical character told DNAinfo they were irate at New York University for putting up dozens of signs asking walkers to kindly curb their pooping dogs. The preservationists claim the signs are illegal.

The city's Landmarks Preservation Commission waded into the battle this month and ordered NYU to remove three signs at its Silver Towers complex, off Houston Street.

The offending signs, which say "please leash and clean up after your pet" and "curb your dog at the street," were installed illegally on landmarked property without a permit, the commission said.

But preservationists claimed the city was ignoring similar posters plastered all across the neighborhood. They are also outraged by "Dogipot" clean-up stations that provide litter bags complete with instructions.

According to the preservationists, it's illegal to install the"Dogipots" on properties with landmark status.

Thank God for the LPC! After all, it's much better to have actual dog poop than dog poop signs in a landmarked district!
Posted by Queens Crapper at 1:32 AM

Everyone should dump their dog shit in front of their brownstones.

They complain about dog poop signs when Queens continues being shit on daily by the Betts/Tierney team at LPC.

Now if Queens had some real preservationists instead of the tit-babies like the 2 Jeffs and Dr. Jack-off...
we'd see some more of our borough's heritage saved!

I wonder (LOL) who our next burro historian will be.

Anyone for compiling another redundant new study or signing up for a walking tour ?

most probably a NYU professor stepped in poop and created this big hoopla. This incredibly STUPID use of signage DUMPS on the nab much WORSE than biodegradable poop! I can't believe that this was allowed to happen!

ALL dog owners KNOW to pick up the poop - someone of course in the nab is not doing it - you could put flashing red NEON signs all over the area in huge lettering saying PICK UP THE POOP - it does NOT matter - that person is NOT going to pick it the poop!

The thing to do is what my favorite Mayor did years ago which was simply to FINE the offender(s)!

Hey, folks, our presevationists in Queens don't take issue with this. They are buddies with the Manhattan set.

If they had a problem with this egregious system there would be an outcry. Instead they are doing fundraisers with Manhattan groups.

As you can see, they see no problem.

They got their few areas landmarked. Do you think they give a *$#$& about everyone else?

Because once you get yours, you can turn your back on everyone else.

That is just the way it is.

The dog shit situation on manhattan sidewalks has gotten out of control. Between all the Paris Hilton 20-something wannabees with their mutts, and the blue-haired old ladies, it's one big disgusting mess. Naturally, there is no attempt to fix this.