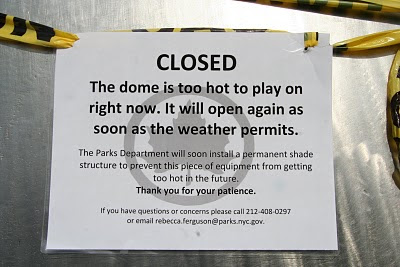 For months, children have been playing a dangerous game at the new $2 million playground in Union Square Park: How to avoid getting scalded on a seven-foot-high metal dome.

The play equipment reaches scorching temperatures in the sun. Heat waves can be seen rising from the top.

The metal orbs were quickly covered at Brooklyn Bridge Park, but the city has refused to even post a warning at Union Square. On Friday afternoon, however, a Parks Department employee was forced to close off the blazing orb, placing traffic cones and flimsy caution tape around it. A shade structure is supposed to go up sometime according to the Parks Department, but warmer weather will arrive first.

I'm glad we paid a hoidy-toidy architect to design this wonderful amenity.
Posted by Queens Crapper at 12:38 AM

And he clearly hasn't learned from the experience. Want to bet he tries this again?

We must all suffer for art.

I hope they are impossible to reach too. Many people perversely ignore warnings because they have authority issues, while others are not literate in the English language.

I'm going to go down to Union Square and cook some breakfast on the dome tomorrow morning.

They have them in Brooklyn Bridge Park and in Union Square Park but none in any parks in Queens? What an outrage! Don't we count for anything?!!! I'm surprised that they haven't installed any here. Don't they want to fry our kids, too? (Thank goodness we're neglected in that regard -- at least so far.)

Why do you think they're called small fries?