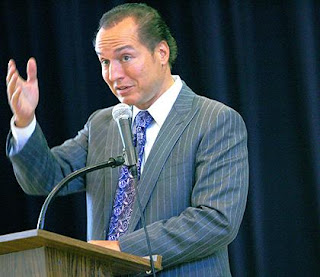 City Councilman Peter Vallone Jr. (D-Astoria) is calling on the city to alert local communities and their elected officials before a new cell tower or antenna is to be placed on top of a building near residential neighborhoods.

Vallone introduced a bill last week that would include several new requirements for cell phone companies that plan to build towers or antennas on the roofs of buildings. He had first proposed similar legislation six years ago.

“We pushed for the city to list the location of cell antennas and now we are pushing for the community to be notified when carriers are planning to install new antennas,” he said.

The bill would require companies to notify communities when a tower or antenna would be mounted on top of a building, provide the community board and Council member with a written notice before applying for an installation permit with the city Department of Buildings and put an identification number on each antenna to enable residents to link potential concerns to specific equipment.

The companies would also have to prove they first made an effort to install the antenna in a non-residential neighborhood.
Posted by Queens Crapper at 12:37 AM

I'd love to live in a condo but because of these cell towers that pop up anytime, anywhere I can't.

yup. a study reco'd not living within 1300 ft of these towers. thats about 5 city blocks. almost impossible in the city. i live three blocks from one. time to move?

Trying to determine if Pete looks like Mussolini, the Pope or Queen Elizabeth with that hand gesture.

Requiring the company to "alert" the community is entirely different than asking that community for permission.

fullsignalmovie.com
vallone is in the movie!

Too little, too late. So many of these towers are already in place, even in residential areas on one way streets. The contracts are in place and the building owners are reaping lots of cash. They don't care how it will effect people's health down the road. Look at Frank's Deli. Not a word from Marge Markey. That block is stuck with that eyesore and I'm sure the cancer rates will soar. Yet, Marge will run for her office again. Time to vote all the shit out of the system. No one cares about their constituents. All the politicians get paid off. Wonder how much Marge got? I'm sure she gets a cut from Frank's Deli's share.

Vallone up to his usual grandstanding. Meanwhile the community continues to be strip mined by the developers while home prices continue to skyrocket to obscene levels.


The Germans left this community spotless when they moved on; I hope you Greeks and Italians are proud of selling it up shit's creek.

Didn't the guvmint give them towers a glowing report?

Vallone has sold out and is speaking out both sides of his mouth but hes no Mussolini.


On March 23, 1919 Mussolini launched a political movement that marked the official birth of Fascism. That morning, 200 people, including war veterans, pro-war syndicalists and intellectuals, met at the Milan Industrial and Commercial Alliance to "declare war against socialism
because it opposed nationalism."

Fascism grew so rapidly that within two years, it transformed itself into the National Fascist Party at a congress in Rome. Also in 1921, Mussolini was elected to the Chamber of Deputies.

With financial support from employers squeezed by trade unions and corrupt politicians, Mussolini developed a loyal following among disenchanted, angry, mostly lower-middle-class conservatives and veterans, as well as the military, the business elite, and the right wing. He promised them he would end disorder and corruption, and recreate the glory of the Roman Empire.

I said what his hand gesture looked like, not that he was Mussolini. you folks need more fiber in your diets.

Requiring the company to "alert" the community is entirely different than asking that community for permission.

You got it right but in Astoria its enough that the people get the illusion that he cares. But not to worry. Nobody will make them wise. That neighborhood resembles pasants in a bad movie.

This is Astoria, folks, and no one will help them or give them a break - but take advantage of them everytime they get.

Cell phone towers are everywhere. No one will remove them. Many of them are on buildings of Vallone supporters.

The reality is the cell phone$ are not under any regulation$ requiring them to go to the pol$ for approval$.

Ya get$ the picta?