A lesson on getting what you really want... 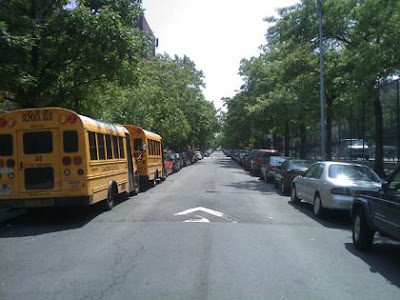 After dozens of protesters marched into the meeting and spoke passionately in support of the measure, Community Board 3 members Thursday night voted to support turning part of 78th St., adjacent to Travers Park, into a two-month play street this summer.

The board voted 27-9 with two abstentions in favor of supporting the play-street application of Jackson Heights Green Alliance, a community advocacy group fighting for more park space, which rallied about 150 supporters throughout the neighborhood Thursday and marched them from 78th St. into the Louis Armstrong Middle School cafeteria where the meeting took place.

“Play Street! Play Street!” chanted the crowd as they cheered, clapped and stomped to show their support.

Many were overwhelmed by the number of people who showed up to the meeting to support the cause.

Dromm, whose victorious November campaign dealt largely with advocating for more park space, said he was pleased with the board’s vote and although the final say goes to the Department of Transportation, he thinks the measure will be approved.

“It was a great victory for the kids in Jackson Heights,” he said.

Sorry, but tossing kids in the street to play is a temporary solution, not a victory. A victory would be to get a new park built to serve the community which has a dearth of park space. We seem to have lowered our expectations to satisfy Bloombergian standards. You gave them an out. They convinced you that this is what you want when it's less than satisfactory. This is not the direction to be going in. Why not have all those people show up at every CB3 meeting and demand a park? Why not hold press conferences that do the same thing? Let's see if the Department of Health, Department of Transportation, Fire Department, Police Department Councilman Danny Dromm, Councilwoman Julissa Ferreras and state Sen. Jose Peralta show up then. I'm guessing you'll have a lot of "we can't afford it" type bullshit thrown your way instead. $3B budget surplus this year, folks.

Keep the heat on and don't settle.
Posted by Queens Crapper at 12:25 AM

They could permanently demap the street and make it a park, but that will negatively affect traffic and parking availability.

People have shown up to demand a park. The only option right now is getting the Toyota dealership that abuts the current park. There is no other space that would not require demolishing homes.

So what? They demolished plenty of homes to build parks in the past. What does the neighborhood need more?

C'mon Crappy, you know that taking homes would require the use of eminent domain which would be ridiculous since this is not a for profit mega development we are talking about. Now if you want to build some mega condos next to the park....

Sorry, I forgot. Thanks for pointing this out.

WAY TO GO I LIVE IN WHITESTONE AND MY FAMILY OWNS A BUSINESS IN JACKSON HEIGHTS. WE HAVE BEEN TRYING TO GET OUR DANGEROUS STREET CONVERTED TO A ONE WAY IN ORDER TO PROTECT OUR 20 PLUS CHILDREN LIVING ON OUR SMALL STREET WITH NO HELP. GOOD FOR YOU, A VICTORY FOR THE CHILDREN. CONGRATS GIOVANNA AND THE CB IN JACKSON HEIGHTS AS WELL AS ITS ELECTED OFFICIALS THAT HAVE NOT FORGOTTEN WHO PUT THEM THERE. SHAME ON CB 7 AND CHAIRMAN EUGENE KELTY ALONG WITH MARILYN BITTERMAN WHO HAVE GONE SO FAR AS TO BREAK THE LAW TO DENY US OUR SAFE STREET. WAY TO GO.