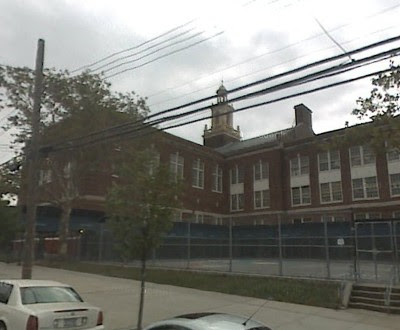 "It appears that this elementary P-K to 5, is having a tower of floors constructed on the roof of the building. it is located at Bell Blvd. at 46th rd.
in Bayside.

Where are all the pupils coming from? It has been rumored that a dormitory scam is operating in C.S.D.26? Rumors of bribes from parents to officials have been alleged.

A lot of crap costing citizens plenty of taxes." - anonymous
Posted by Queens Crapper at 12:51 AM

It also seems that building has been under various states of construction nearly constantly for the past 10-15 years.

the pupils in C.S.D. 25 and C.S.D. 26 usually score the highest in math and english language arts in n.y.c.

is it possible that parents are bribing public school officials to accept their children.

how many are enrolled illegally with faked addresses?

P.S.130 Q is a C.S.D.25 administered lottery school, located in C.S.D. 26 boundries . the pupils,k-3 grade ,have scored the highest in math in state tests three years in a row. most of the 300 pupils ride buses from flushing ,main street . they all return to their zoned schools after the third grade
the local resident children,who live across the street , are bused to other C.S.D 26 overcrowded schools like P.S.31Q .
a recent Daily News story about P.S.130Q stated that 20 % (60 pupils) are from C.S.D.26. i will bet that the D.O.E can not come up with 60 valid pupil addresses or documents that proves their statement to the press.

I was at a meeting once where a woman stood up and said that LI kids were taking their phone numbers and putting 718 as the area code so they could go to school in the city.

school busing: a corrupt bureacracy wet dream...it's a riddle wrapped in an enigma