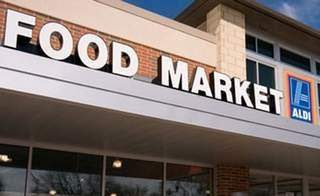 Aldi Inc. operates more than 1,000 stores in 31 states in the U.S., primarily from Kansas to the East Coast.

Last September, Crain's reported that Aldi was building a store in Queens, but the company declined to disclose the exact location. Now it is gearing up to hire staff, though the store is not expected to open until early 2011.

I believe this is where Walmart had once looked at opening. But it was shot down by self-serving pols for its anti union stance. Well guess what kiddies?

Interestingly, there doesn't seem to be as much resistance to Walmart as there once was. Probably has something to do with the unemployment rate.
Posted by Queens Crapper at 12:00 AM

Aren't still demanding that every job pay a living wage of at least $10? Congress and the NYS legislature lacks the guts to raise the minimum wage from $7.25.

I was looking forward to having an Aldi's here in Queens, but Im disappointed in the location, and won't be shopping there. I refuse to patronize any business that has a lot with pay parking.