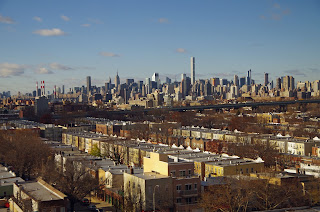 A new market report from StreetEasy shows that Queens continues to be the borough on the rise, in more ways than one, as buyers cast a wider net in search of more affordable housing.

A bright spot for buyers looking to Queens: It also experienced the highest share of price cuts in the city, growing 3.4 percentage points to 10.2 percent. And rents in the borough, while seeing the first annual increase since September 2017 with a modest .5 percent growth, reached $2,164—still significantly less than Manhattan and Brooklyn rents.
Posted by Queens Crapper at 12:06 AM

You mean more foreign investors looking at housing in queens than in any other borough. Let's face it, that's part of the problem why no regular person can afford to live here anymore. Overseas investors offer cash for their houses while we need to take out mortgages (the majority of us). Not to mention we have too many foreigners here who dont mind living on top of one another so they have no problem living 4 families in a 2 family house. And let's not forget the illegals who push up our rents because they have no problem living in an apartment with 2 other grown men who all split the rent or live 2 families in a 2 or 3 bedroom apartment which allows 3 adults to work off the book jobs and 1 adult to stay home and watch the 6 or 7 kids they have between the 2 families. They don't mind living in crowded, small places on top of each other because they are used to it.

I invested in your mom said...

Yes, I agree with the first commenter. Asians in particular are driving up the prices. They seem to be willing to pay anything to live in Northeast Queens. When you have single story ranch houses asking 1 mil, that's crazy. They are coming to Forest Hills too. A typical row house (Archie Bunker style) around Metropolitan Ave could easily be around 1 mil and still will need renovating. Then you have all the hipsters and those pushed out of Manhattan driving up prices in western Queens. It's a mess. The only "more affordable" areas would be southeast Queens, which,if you're not Caribbean, why bother, or the Woodhaven/Richmond Hill/Ozone Park, which if you're not Hispanic or Guyanese, why bother; and those sections look old and dumpy. So yea, it's a struggle to purchase anything decent in Queens.

The comment above mine makes too much sense, which must be labeled racist and anti-immigrant.

Sit back, shut up (especially if you’re a heterosexual man) and enjoy the ride to our liberal utopia!

First off the headline in the link comes off partly confusing and insidious, how does demand for affordable housing drive up the market rate for rentals and home ownership. Well, it's because the only affordable housing being constructed comes along with 3 times as many market rate housing. Or like de Faustio's and his REBNY masters scam affordable housing program has drove up the area median income in the boroughs because of the fabricated high values that are conjured up with the stage 4 cancerous tower pestilence like in LIC and what's going to be built in the Rockaways.

And first anonymous is absolutely right. This is scandal happening in plain sight. These investors and these fucking realtors have no morals or ethics and elected officials on both sides don't give a shit because they will pander to whatever nationality that are affiliated with these clustered tenants.

And that goes for the dumbass hipshits, as developers and LLC's are taking over apartment buildings and brownstones and turning them into upscale market rate flophouses.

And now it's happening in the dirty southeast. I saw a house for sale that was sponsored by a real high end corporate real estate company. Be aware of your surroundings.

In my opinion, I think this boom is another bubble that is getting wider and perilously close to bursting. And it doesn't help that this evaluation was done by a apartment listing website that caters to the hipshit market demo.

To first posters - they vote Democrat and the backward electorate of Queens perpetuates *ssholes by reelecting those who make money of their stupidity.

Look at the Crowley wave under the surface.

Asians (off the boat) are killing the middle class of Queens. And have been for years. It's amazing that during my time in corporate America I've worked with the elite of industry, but never to come across an Asian born in Asia. And yet they somehow come up with millions to buy ordinary homes in Queens?

These people are as crooked and criminal as they come. Just last year the IRS was knocking on the door of the Chinks next door to me. They fled town pretty quickly and sold the house. Unreal.

Time to expand the travel ban.

Criminal Asians, from the mainland, continue to invade Queens in droves. This is 10x worse than anything Russia ever did to the US, but yet you won't hear a peep about it. Our cowardly pols have killed off the white middle class.

This thing is getting really complicated! Foreign investment in real estate here is quite normal. It's not just Asians. We have investment from all over the world. When the market flattened a few years ago, it never dived in NYC, a lot of owners wouldn't sell to buyers for fear they would miss a new market surge or paid too much during the bubble period. So a lot of buyers turned to Queens or Brooklyn instead of Manhattan, where it was easier to make a deal. There you go. Now that those neighborhoods have caught on the trend continues. Enjoy it! Real Estate can be fun.

And you think that the market is fair here to all the people who were born here in the 70s and 80s? Due to foreign investors WHO DONT EVEN LIVE HERE, we have to suffer because of them? So what happened to OUR American dream? We just have to take this shit even though many of those have been working hard to save up for a house? Some of us work very hard all just to be outbid by someone who NEVER EVEN set foot here?


I invested in your mom said...

SAYS the product of one them.

Even in New Zealand, they cut off Chinese investors over there because their country is SMART unlike the USA. In order to buy property in New Zealand anymore, you MUST be a citizen there! And you try buying property in China and see what they tell you! Wake up and look around before running your mouth like a liberal idiot. Get more educated before running your mouth!

We need to lockdown and prevent all foreigners from purchasing property outside of condominiums in high-rise towers. They're just squirreling away money since it's useless in China, same as they did in Vancouver and elsewhere. I'd also ask that some here distinguish between 1st and 2nd gen immigrants who moved here decades back (like myself), saved up, and bought their homes for staying in long-term versus people just investing from abroad who never intend to actually live in the places they buy, and just flip or speculate to a bundle and cash out...but that mental level of sophisticated nuance may be asking too much..

Queens is the most corrupt borough in all of NYC. It covers more miles than any other and no once gives a crap in Queens. That's the best part. You have these so called community groups and community people. They are ineffective and tied to the machine. Investigate Queens Community Boards and what they do for their grift and pay offs.

Hey Tommy, where are you from originally, if you don't mind an Anon asking? From your user name I'm guessing Turkey or Persia?

@Anthony Frank say "It's amazing that during my time in corporate America I've worked with the elite of industry, but never to come across an Asian born in Asia..... Just last year the IRS was knocking on the door of the Chinks next door to me."

I doubt you really work with the elites of industry...because those people aren't racist like you. Racist == Ignorant. Not to mention that you don't get out much if you haven't come across an Asian born in Asia. Case close. You just revealed yourself.