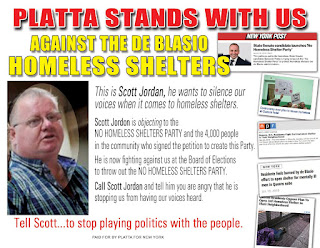 Let’s start with that old adage “Tell me who your friends are and I will tell you who you are.” If you buy that then we can make our case very simply.

Platta’s buddy, and campaign consultant, is none other than former City Councilman Dennis Gallagher. You remember him: In the middle of his second term he was forced out of office because in a drunken rage he sexually assaulted a woman he had coaxed into his district office after which he burned her body with a cigarette.

But okay, let’s say it’s not fair to judge Platta on the basis of who his good buddy is.

In May 2017, Platta was arrested and charged with aggravated harassment after a female doctor threatened to expose his marital infidelity.

“If you tell anyone about my cheating, I will kill you and your family and ruin your life; I will send a patient to your practice to make false reports against you and ruin your career.”

That’s a direct quote from Platta straight from an official court document: The People of the State of New York, Plaintiff, v. Platta, Slawomir, Defendant.

In order to get on the ballot for the upcoming primary, Platta circulated a petition for a third party line called the No Homeless Shelter Party at a homeless shelter rally. The problem is that Platta told unsuspecting rally attendees that they were signing a petition to speak out about stopping Mayor de Blasio from creating any more homeless shelters.

When one such signer, Scott Jordan, realized he had been duped, he decided to become an objector to the petition at the NYC Board of Elections because the signatures were obtained through fraud and misrepresentation. Platta’s answer to that was to put out a media hit piece against an innocent constituent of the district and muddy his good name by circulating it through the district and on social media.

By the way, did we mention that Platta was collecting signatures personally, yet when the volume was submitted to the BOE, none of the sheets he carried were witnessed by him—a fatal flaw in the petition process.

These revelations are the tip of the iceberg when it comes to Mr. Platta, who was kicked off his bogus "No Homeless Shelter" party line by the BOE yesterday. Naturally, he was endorsed by the Queens Ledge.
Posted by Queens Crapper at 1:35 AM

I never heard of this Slawomir Platta before until I saw a huge ad in the Rockaway Times weekly saying he is going to stop socialism from invading Queens, which looked as silly as an Onion parody, but in actuality was a fearmongering ad. So anyone against socialism should be forewarned when this guy holds a rally on that theme to garner cheap votes.

This guy is a pathetic sleaze.

Let’s start with that old adage “Tell me who your friends are and I will tell you who you are.”
Hysterical considering the publisher of this paper was convicted a few month's ago for some felony related to witness tampering involving a mobster case. That guy Jordan is an Ulrich, Haggerty compadre. If there agin this guy Platta then Platta's got my vote.

Had the Queens GOP done more outreach to Polish-American voters in western Queens, there would not be a Slawomir Platta running. The party is a joke. It had one-term Bob Turner, but no momentum afterwards. It elected Koo and then he ditched the party. It has Anthony Pappas running on a shoestring campaign against Ocasio-Cortez but without any significant party support or national attention. Likewise with Bob Holden who caucuses as a Democrat.

The district includes Forest Hills and Kew Gardens Hills, where many Orthodox Jews love Donald Trump. Why isn't there a Republican club in KGH? Tom Sullivan, the preferred party pick, didn't visit the Jewish side of the district. Why not?

It's the reason why I have abstained from voting, altogether, when the system is so completely rigged against a people who believe that they are voting AGAINST the rampant corruption, graft and greed, when they are in fact, ironically reinforcing it with a vengeance. The whole process is a criminal enterprise of openly practiced crimes against humanity that carry no consequences whatsoever (except for everyone else, all of whom continues to path the ultimate, soul-crushing price). And, the public be damned (again and STILL)!

That's why I correctly refer to these voracious, predatory and rapacious thieves as: 'CRIMES WITHOUT CRIMINALS!'

So in other words, Queens.

"The district includes Forest Hills and Kew Gardens Hills, where many Orthodox Jews love Donald Trump. Why isn't there a Republican club in KGH? Tom Sullivan, the preferred party pick, didn't visit the Jewish side of the district. Why not?"

You want to run it?

Platta sounds like a jerk and I'll be voting for Sullivan but why does the article call him an "alleged attorney"? He is admitted to practice law in NY, something so very easy to verify. Reporting these days is such a joke.

Voting is not that difficult folks.
If you don't like the way things are going: as in DeBlasio destroying the middle class enclaves of Queens with homeless shelters and turning the public schools in those same districts into daycare centers for everyone in society making bad choices, or Cuomo creating the worst small business atmosphere of any state, then you vote whoever will oppose the status quo.

In this case, you vote Republican because voting on one of those obscure lines that nobody's heard about is about as productive as peeing your pants in public.

In this case, there's a primary between two candidates for the Republican ticket. Examine the candidates closely and vote for the one who seems more trustworthy.

But what about all of the fake Facebook accounts he has spamming community boards with campaign crap and threatening people (including this Scott Jordan guy)? CAN WE PLEASE TALK ABOUT THE TROLLS?!? I wish someone would write about them because they were so hilariously bad I actually felt compelled to post comments on some of those accounts outlining how bad they were, how easy it was to discern they were fake, etc. He was clearly inspired by Russian bots/trolls for sure. But he is sorely lacking even the "competency" even those have. Using stock photos for profile photos. No way that can be traced. NO SIR. LOL.

Amazing that there's a Republican primary in Queens, I guess there's some life coming back to the local party.

Yes. Look for the same to happen to Ocasio-Cortez after 2020.

The district includes Forest Hills and Kew Gardens Hills, where many Orthodox Jews love Donald Trump. Why isn't there a Republican club in KGH?

Not necessary. Jews' interests are generally well received at the state and local level in NY by Democrats.

PlataPus will have many poles heading to the polls.

Cheesy ad here. Even though he made an effort to take photos with people.

Platta will win because Maspeth is Polish,
just as Paladino will win beceause Whitestone is Italian