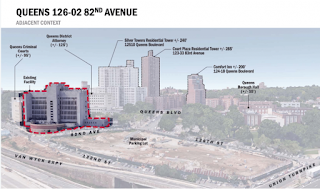 A number of Kew Gardens residents have come together to launch a campaign to block the reopening and expansion of the Queens House of Detention.

About 25 residents have formed the Community Preservation Coalition, a group that aims to stop the Mayor’s plan to reopen the shuttered 126-01 82nd Ave. facility.

The group is comprised of many of the same people who led the successful effort to the save the Lefferts Boulevard Bridge, according to coalition member Dominick Pistone, who also heads the Kew Gardens Civic Association.

The coalition argues that the mayor’s proposal for a 1,500 inmate jail at the Kew Gardens site— adjacent to Queens Borough Hall and the District Attorney’s Office— would be out of scale with the surrounding buildings and exacerbate traffic in the neighborhood.

Pistone said the mayor is calling for a “monster facility that’s totally out of scale with the neighborhood.”

The coalition intends to launch a public awareness campaign after the City holds a public hearing on the project next week, Pistone said.

The hearing, which will be held at Queens Borough Hall at 6 p.m. on Sept. 26, is part of the Environmental Review Process that is required for the site to be rezoned. The public will have the opportunity to hear more about the project and to ask questions.

The City needs to rezone the site for the jail expansion to move forward.

The group launched a petition against the jail on Sept. 18, and Pistone said the group and will begin to distribute fliers about the group’s concerns in coming weeks. He said the coalition knew that the City was considering reopening the jail, but was shocked as to the scale of the expansion.

The problems that exist at Rikers will only be replicated at these new site. The so-called "poor and volatile conditions" will not go away. Will the mayor please explain how closing Rikers will solve them? Developers are in his pocket. This would be just another Real Estate transaction that will make the city coffers and developers rich. We know the truth.

The Mayor needs this to close Rikers. Then Rikers can be sold to LGA. The Mayor wants longer runways to allow bigger planes to land and takeoff.

How come no costs reported in this article? Once again a poorly written piece. But I hope these folks are successful in stopping this mega jail. NYC needs to keep Rikers and spare the neighborhoods the grief. Why are we getting such a huge increase in the prisoner population? Some prison systems are using SKYPE for certain hearings and saving millions on transport along with possible violence and escape attempts, what about NYC? How much per inmate is this grand idea going to cost? And where is the money coming from? Do a little needed research, reporters!

Good luck to them. But in regards to the Lefferts bridge, until all those businesses get their leases extended past 2020, nothing is saved.

LGA will be closed - its not a good idea for planes to be descending and slowing down to land over immigrant ghettos stretching from the Ocean to the Sound. Jamaica Bay is finished and will soon be gone - expand Idlewild into the sea.

The Inner Sound will be the start of a new neighborhood - all that building at LGA will be converted into housing. Riker will be an exclusive enclave.

Why would they stick a huge JAIL, with all the negativity surrounding it, in a beautiful tree lined neighborhood? Answer: DeBlASSio's commie agenda dictates that there can't be anything good or bad, everything must be leveled out and made EQUAL. Nice neighborhoods, populated by people who put aside immediate gratification to make something of themselves to afford that neighborhood, must be ruined by sticking jails and homeless shelters and mental health shelters in them. This is so that the inmates of those institutions ruins the safety and tone of the beautiful neighborhoods, bringing them nearer to the "desirability" of the ghetto neighborhoods, populated by people who did nothing to achieve anything, waiting around for it all to be handed to them. That's one hook for the commie DeBlASSio. The second hook for him is his unbridled GREED. His real estate developer masters are absolutely licking their chops over a large tract of land (Rikers) to develop in an area where there aren't many large tracts left.

This disgusting, corrupt, stupid man is a one-man wrecking crew for what little remains of NYC. He is busy ruining neighborhoods, upholding the "rights" of illegals among us, handing over the failing school system to a fellow commie and social justice maniac who is more interested in "equality" than anything remotely academic, and grandly ruining businesses with his stupid bike and bus lanes limiting access to them. Every other day he is accused of various offenses, yet never seems to have them brought up in court. He uses OUR money to pay for his legal expenses. Is that why we pay taxes? He is the result of lazy apathetic voters sitting at home instead of researching and going out to vote for someone with even a hint of decency and competence about them.

I think the mayor wants to sell Rikers to real estate developers. Follow the money.

Too little, too late. Koslowitz threw the doors wide open.

I would have supported reopening the old jail, but building a 30 story site in place of the desperately needed parking lot that was just completed? Who thought the community would be OK with that?

So now the mayor wants to house 1500 inmates right off Queens Blvd. What can go wrong?
Sing Sing prison has about 1700 inmates and that's all the way upstate.
So in effect, the mayor is proposing a correctional facility the size of a state prison right here in the middle of the working families and children of Queens.
We all know that every prison comes with its own baggage of drugs, contraband and abuse, no matter how hard they try to clean them up.
Great job Dems!
This is why you don't vote in a guy whose idea of a honeymoon is vacationing with Sandinastas in the third world.

You keep on electing Democrats and this is what you get. Don't cry New York!

THIS WILL COST US $$$$BILLIONS. YOU CAN KISS ANY LONG-AWAITED SUBWAY IMPROVEMENTS GOODBYE!

On Wednesday, September 26th, the City will hold a public meeting to solicit input on their plans to close Rikers and move prisoners to community jails. At this meeting, learn more about what your neighbors are saying and share your concerns with the Mayor's office and other elected officials.
Borough of Queens, September 26, 2018, 6:00 PM
Queens Borough Hall
120-55 Queens Boulevard, Kew Gardens, NY 11424

check this out...Council member from Fresh Meadows wants to be the next Qns DA..Rory Lachman.. Disgraceful how he uses the race card when he is unable to respond or justify a remark. Just like the bike lane advocates, people are sent from meeting to meeting. They intimidate locals from speaking....

the price tag so far is 30 Billion. Of course, there is going to be overruns. It's $6 Million per cell. Just the interest on the $30B is going to be over $1B. Everyone wins...Banks, Developers, imates, wall St, Pols - esp Mayor debasio and GOv Cuomo. that is everyone wins except the poor tax payers who will be footing the bill...

The mayor is building the prison to drive everybody out.
That 1700 inmates becomes more like 3400 pieces of garbage when you count the friends, girlfriend, wives & family's coming in for visits (including conjugal) and to pass drugs.

Why doesn't this city consider building a billion dollar tower jail on the pristine block where Judge Lippman lives. Since he authored this dumbass paper on the justification of shutting down Rikers.

Who the hell would want to live by the rancid superfund site Gowanus Canal? But there's a luxury apartment building there too. The rental market demographic in NY and those migrating here from other states consists of idiots.

The answer is always based on the part of the question you left out: at what price, with what needs?

Scoping Meeting on September 26th at Borough Hall, Kew Gardens. Why doesn't this announcement appear on the Department of City Planning's site? (Does it??)

There are 2 short clips of the Rikers Island Debate at Kew Gardens Hills Civic Association:

Maybe we should be careful what we wish for. Brooklyn is getting a FORTY STORY prison. Chinatown is getting A HUGE HIGH RISE, too, despite the fact that there is a huge monolith across the street from the proposed site of the new prison. Do you think they may agree with Kew Gardens citizens, rip down the whole detention center and replace it with a FORTY STORY prison?
Oh, wait, that's exactly what they're doing. We don't need any parking in this area. Citizens can ride a bike or take a bus. Besides, for-profit prisons make much more money than parking areas (1) not only for corporations running the prisons but (2) for our police departments who monitor traffic in the area and (3) local politicos, including our illustrious mayor.
Too bad we don't have a two-party system in New York City then maybe we'd have a fighting chance.

Serves those smug, leftist KG/FH Democrats right. The jails and homeless shelters should be in your neighborhoods you fools. This is the result of your voting patterns and you deserve every bit of it.

NY doesn't have any private prisons.

Regardless of the fact that NY prisons are listed as not-for-profit, they really are for-profit corporations. If they didn't make a profit for someone, no corporation would supply them with food, clothing, uniforms, etc., etc. Someone is making money off of prisoners in NY or these prisons would not exist.