Rezoning of LIC is happening regardless 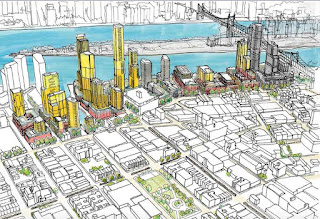 Despite the city’s slow-moving plan to study Long Island City for a possible rezoning, real-estate developers are moving their residential and commercial development proposals for individual sites through the Uniform Land Use Review Procedure, the city’s review process for zoning changes, while community members gear up to testify against the new developments this month.

The idea of a neighborhood-wide rezoning in Long Island City has some community members and small business owners—all concerned by what some have called “overdevelopment”—wondering how long it will be before they are pushed out.

Long Island City and its residents are all too familiar with rezonings. Over the last few decades the neighborhood, including Hunters Point, Queens Plaza and Dutch Kills, has transformed from an industrial neighborhood to one hosting a mix of commercial and residential development under an ever-expanding skyline.

In 2017, Mayor de Blasio announced Long Island City as one of the dozen or so neighborhoods the city planned to rezone as part of his plan to create an estimated 300,000 affordable units. The area boasts extensive transit access with with eight subway stations, 13 bus lines, two LIRR stations and the East River ferry terminal, and its proximity to both Manhattan and the new Cornell Tech campus on Roosevelt Island make it an ideal location for a “economically diverse, 24/7, mixed-use community,” according to the Department of City Planning website.

The study launched by the de Blasio administration overlaps with the 2001 Queens Plaza study area and parts of the 2008 Dutch Kills study area. It encompasses the Special Long Island City Mixed Use District, a special-purpose zoning district that has a mix of residential, commercial, and light industrial uses and includes the Queens Plaza, Court Square, Hunter’s Point and Dutch Kills neighborhoods. Thirty‐seven blocks of the study area fall within the Queens Plaza and Court Square sub‐districts. According to the DCP, the majority of new completed or under-construction developments are located on those 37 blocks, including an estimated 10,100 housing units, more than 1.5 million square feet of office space and 600 hotel rooms. DCP has not scheduled any public engagement events yet for this study process.

According to residents, developers are not waiting for the city’s study or the possible city-sponsored rezoning and are avoiding the community by going through “spot-rezoning,” which means changing the zoning of a single property and not including any community engagement during the planning process.
Posted by Queens Crapper at 12:46 AM

Long Island City sounds like a great area for the boy mayor's planned neighborhood jails.
After all it has great mass transit access for family visitation and the local progressive politicians would welcome the inclusion of a prison to their community. I'm sure all of the developers would be in favor of it and even provide construction at a reduced cost.

They used to drop off inmates at Queen's Plaza..from a 2002 issue of TNY:

"For as long as anyone can remember (that is, about seventeen years), a busload of inmates newly released from Rikers Island has been dropped off each weekday morning on a street corner in Long Island City, Queens. At around 5 A.M., a school bus, colored Department of Corrections orange-white-and-blue, pulls up to a discount furniture store on Jackson Avenue and delivers fifty or so rough-looking gentlemen into the predawn squalor of Queens Plaza South..
But that may be changing. Last month, the north side of Queens Plaza was rechristened MetLife Plaza, in honor of its newest tenant, which has about a thousand employees there. MetLife is merely the latest indication of the spiffing up of Long Island City; it joins the Citigroup tower to the south, the temporary Museum of Modern Art to the east, and a handful of new luxury apartment buildings to the west. To some dreamers the neighborhood is the future home of a glittering Olympic village. "The signs are clear," Eric Gioia, the district's city councilman, said last week. "New coffeehouses, new restaurants, artists on building steps—Long Island City looks like what I imagine SoHo did thirty years ago."
In other words, it aspires to be the kind of neighborhood that does not easily absorb a nightly dispersal of jittery ex-convicts. To that end, some interested parties have taken on the task of diverting the Rikers Express elsewhere, or getting rid of it altogether. Gioia, citing it as an impediment to the ongoing development of western Queens, has asked Mayor Bloomberg to consider a new discharge policy. (The Mayor, according to a spokesman, is working on it.) Gioia would like to see the city disperse the inmates in other boroughs as well, not just dump them in his district.
MetLife, meanwhile, recently commissioned a report evaluating other potential dropoff spots around the city. The study, produced by the Wadley-Donovan Group, a corporate-location consulting firm, is a chilly exercise in NIMBY calculus; it aims at identifying a place that is, more or less, in nobody's back yard. The new dropoff spot would have to be as close to Rikers as Queens Plaza, or closer—that is, within three and a half miles of the Rikers Island bridge. It would also have to be near a subway station that is open between four and six in the morning. And, above all, it would require, as the report puts it, "bordering station environments that are less developed (under-utilized) in support of minimum employer/resident objection." In short, the more barren, the better—no community equals no community opposition. The study relied on several variables in grading prospective dropoff spots: population density, commercial activity, preponderance of families and "family-based characteristics" (schools and so forth), income level. The lower each variable, the higher each dropoff point's grade. "To have the least negative impact on upscale development and the quest for high-end uses," the report reads, "the lowest Median Household Income received the highest score." That is to say, the people who live near the new dropoff point should be poor.
Ten potential dropoff spots scored higher than Queens Plaza—two in the Bronx and eight in Queens. ..The winner, by a landslide, was Willets Point and Roosevelt Avenue, in Queens, otherwise known as the parking lot at Shea Stadium, a windswept wasteland if ever there was one (with the stench of Flushing Bay at low tide as an added bonus).
Who knows? It could turn out to be a boon to Shea—and a blow to Queens Plaza."

That's a good point! Why isn't the mayor putting a jail there, instead of putting it next to an already existing residential community?
There's room for 500 prisoners at the old Queens House of Detention, not 1500 they need. This seems like a good place to put the other 1000.
While we're at it, has the mayor proposed any homeless shelters here, or are they just for Eastern Queens?

Great analysis Tommy. This is one of the high points of Queens Crap. Local folks who know the score bring it to the public. Better than many of the press writers.