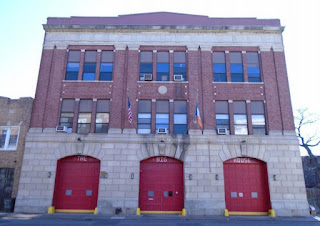 A fire house and a police station both built in Far Rockaway in the early 20th century have officially been approved for landmark status following a unanimous 47-0 vote last week, according to City Councilman Donovan Richards (D-Laurelton).

After Hurricane Sandy in 2012, much of Far Rockaway was in need of redevelopment and surveyors from the city’s Landmarks Preservation Commission researched the history of buildings in the area.

In 2017, Far Rockaway was rezoned and the 101st Precinct — formerly the 53rd Precinct — and the Engine Companies 264 & 328/Ladder 134 were seen as worthy for designation, according to the councilman’s office and the LPC.

“They carry history and have housed some of our most precious civil servants,” Richards said. “These sites will carry on the character that was set when the modern version of our community was first being shaped.”

The precinct — located at 16-12 Mott Ave. — and the fire station — located at 16-15 Central Ave. — publicly came under consideration as landmarks in March and the LPC held a hearing with members of the community in Manhattan one month later.

Boy, the LPC sure loves to designate Queens' unremarkable municipal buildings...and little else.
Posted by Queens Crapper at 6:26 AM

While they were landmarking this, your city is giving the library near there a futuristic upgrade for the eventual L.I.C.-style gentrification of Far Rock.

Crappy, your last sentence is so true.

@JQ It looks cool, I'll grant. Lots of light. I don't see any books, but libraries are supposed to change with the times. I wasn't onboard with the Elm branch's reno til it was done. It's not terrible, and it is certainly larger and more spacious now.

Maybe we can restart on an even playing field and only then can things change.

These are not going to be for studying or learning, these are designed for "events".
There have been other library closings in other towns, like the one in Richmond Hill by Jamaica and Hillside and they are not getting the glossy Gehry-like makeover like the one in Far Rock is getting.

The reason no one in Manhattan takes Queens seriously is the borough is mostly to blame.

In Manhattan they are trying to save Carnegie Libraries, in Queens two old guys get brushed aside and everyone talks about how the new space is so much nicer.

Then there is the crowd that always wrings their hands saying 'how terrible' when something gets torn down, and then when challenged to act like adults rather than children, they angrily slink away. After all, if it was important, their politician would do something about it, right?

Trump supporters have nothing on Queens residents.

> I wasn't onboard with the Elm branch's reno til it was done. It's not terrible, and it is certainly larger and more spacious now.

I felt the same way about the new KGH library, it didn't look appealing in the mockups, but now that it's constructed I see the brilliance in its' design.

Far Rockaway - breeds gangbangers
please be careful if you go there. You could get shot,robbed or stabbed. Meanwhile, the young gangs recruit using the Queens Public Library in the branches.

Events, they like. Books and manners not so much.

Easy with the Far Rockaway talk there,

First off, the area of Bayswater is a rapidly expanding and growing conservative Jewish community that is an extension of the 5 towns area of Long Island.

Next, you have a huge influx of hispanic population changing the old demographics.
There are new developments along the ocean which are aimed at affordable housing for seniors. That's all in the Far Rockaway area.

Move over to the Beach 60's through 80's and you have the enormous new Arverne By the Sea development. Yes, gentrification with its good and bad points.
Yes, there is a disproportionate amount of public housing projects from when Rockaway was a dumping ground for the city's problems, but the value in the land by the sea is rapidly being reassessed.

The Rockaway Beach area is booming with the Ferry and tourism coming in with restaurants.
Belle Harbor and Neponsit are the highest priced real estate in Queens according to recent data.

I'm sure I'll hear from all the peanut gallery about hipsters and all that. I don't give a crap, if you have a neighborhood with improvement in housing and better streets, it's a start. The crime, transportation and school issues need big time improvement yet, but again, you people keep voting Democrat so what do you expect?

If all this Far Rockaway improvement is to pay off, there needs to be a balance between the huge developments being pushed by the local politicians and the services available to the people. Being that the local politicians are Democrats like Meeks, I'm not sure I would bet everything on a nice new library and landmarked Police/Fire Department buildings.

We're probably going to disagree in the future but that was an excellent synopsis of the layout of the towns and citizens of Far Rock and west of the peninsula. Way to beat the NY Times to the punch before they put out their bland lifestyle article about it (just like their rancid coverage of Ridgewood and the one they did on Riis 3 years ago).

But the hipsters do not improve towns. They leech off of them. And REBNY and the electeds they control curate towns with mindless rezoning and street redesigns to make them happy. Happier than everyone else that have been suffering for years of being denied funding for overdue improvements to housing, infrastructure and transit.

And there are plenty of zombie mansions in Belle and Neponsit all these years after Sandy hit.

Other than that, your post really made me yearn to finally move there. Unfortunately the land is eroding there not only because of the extreme effects of climate change but also because of the idiots at FEMA and city hall.