Bleeding hearts are actually in favor of cash bail 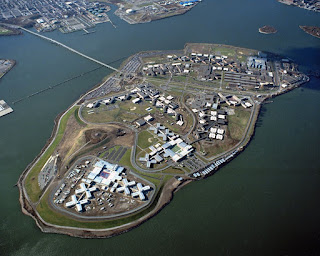 City officials are scrambling to prepare for a human rights organization’s mass effort to bail out 500 women and teenagers from the Rikers Island jail complex, despite strong resistance from the police and prosecutors.

Across the city, prosecutors are identifying cases that might be affected by the bailout, and calling hundreds of crime victims and witnesses in those cases to let them know that defendants who they thought were in custody might soon be released on bail.

Prosecutors in the Bronx said they were working to safeguard as many people who might be vulnerable through measures like orders of protection.

“We are doing all we can to protect our victims and witnesses in the event the defendants accused of violence against them are released from jail,” Darcel D. Clark, the Bronx district attorney, said in a statement.

The Robert F. Kennedy Human Rights group is raising up to $5 million for the bailout, and will enlist 200 volunteers to help identify and free female prisoners at the Rose M. Singer Center, and 16- and 17-year-olds at the Robert N. Davoren Complex, starting Oct. 1.

Kerry Kennedy, president of Robert F. Kennedy Human Rights, says the plan, which organizers believe could be one of the largest so-called mass bailouts in the country, will move forward despite the city’s concerns.

The bailout is designed to support an end to cash bail, which activists say discriminates against minorities and the poor, and to push the city to close the dangerous Rikers jail complex more quickly than the current 10-year timeline. Approximately 87 percent of the jail population is black and Latino.
Posted by Queens Crapper at 12:14 AM

Go up to Boston and surround inn areas and bail out the mutts up there. Oh,wait,that’s vroom close to the compound.

Mary Kennedy is deluded! When will they use their millions to help Irish Americans? Never- they turned their back on their own like Joe Crowley did.
I guess her housekeepers child was arrested so this is their response
Why don’t they put their money doing something for crime victims? I guess that’s not cool.

Kerry Kennedy how dare you make the streets less safe? You will be in your limousine very secure while the rest of us will have to deal w/the garbage that has no problems harming us. They will be back in jail no matter how many times you throw that money away

Sorry, RFK, but you all can spend that 5 million better than this. Like in the toxic and dilapidated NYCHA buildings and aid for working homeless people and families.

But it's more better to spend on flavor of the month issues.

I wonder who is in this group and if they have real estate holdings. Because this is a good way to bring down the jail population so they can get those prison towers in the four boroughs fast tracked.

Every one of these mutt's that go on to hurt someone after being released need to have that hung around these bleeding liberal's necks!

Why Norman Mailer wasn't shunned is a shock to me.

Eighty-seven percent of the prisoners on Riker's are Black and Hispanic and the crimes committed that got them residence there were against mostly other Blacks and Hispanics but yet bail is considered racist.

ITS BAD ENOUGH THAT WE HAVE THOUSANDS (60,000) HOMELESS LIVING IN OUR STREETS, WITH A LARGE PERCENTAGE OF THEM HAVING MENTAL PROBLEMS AND NOW WE WANT TO BAIL OUT VIOLENT REPEAT OFFENDERS?? WHAT THE FUCK IS THE KENNEDY CLAN SMOKING??

Our forefathers had to stay at Castle Garden or Ellis Island so their background and even health could be checked, so they could be indoctrinated in what it means to be an American. We need to revive such transition centers.

The Kennedys have done good things in the past but this new venture is just insane. How about cleaning our parks or the piles and piles of trash on every street corner !!

Why don't they do this in their own backyard? If they want to make New York better, why don't they concern themselves with the Homeless Situation? New York is turning into quite the shit show. Between DeBlasio and the Kennedys, it will be unrecognizable in 5 years. That's why the middle class are heading for the exits.

Boy,you guys are blind and don't get it

Cops go on a big fishing expedition,to trap women and children in the hood ,to criminalize them for trumped up charges, and fill them quotas.

Forcing people to plead out ,instead of paying for a lawyer.

This fund is meant to bail out petty , alleged crimes, so people don't ruin their lives forever.

A criminal record, leads people to work crappy jobs, or get no job at all, potentially cause homelessness and broken families.

Just wait until they release them on the streets again then mayor dumbdumb turns rikers into a developer's dream. The residents in NYC will start moving out of the city even faster than what they are now. NY has the highest numbers of net migration moving out! The taxpayers move out and the illegals and/or criminals move in. This city is just going to be either rich or dead broke, there will be no more taxpayers living here. NYC is already in SO MUCH DEBT.

Bail is to ensure a return to court. It is not pre-trial punishment. Take away bail altogether and either remand or release. Anything else is a joke.

If releasing these people is so terrible, why are they being held on bail? They haven't been convicted yet.

Kapimap has a good point. Let's put all the racism aside and look clearly at this situation. When the poor or even the so called middle class are arrested, guilty or not, they are entitled to a bail that they can afford and fits the crime. Jury trials by our peers are way down. I've been saying this for weeks on Queens Crap but not getting it posted for some reason. So we will have massive prisons, no bail and no jury trials. Does that sound good and what our nations founders meant for how our system of justice should work. Stop racist fear mongering and think people!

There have been no comments on this topic that I see therefore I couldn’t “not” post them.

Clearly this end cash bail initiative is another effort by the Riker developers to bring the jail population in Rikers to that magic number of 5000...this gives these political crooks the green light to initiate the closing of Rikers.

Oh here we go with the Let's put racism aside - when no one mentioned race except the poster who pointed out that black and Latino's harm each other, too.
The word racist is a tad overdone.

The myth is that some one is prison because of the color of their skin or for dealing drugs. They're inside because they're violent, sick people who have done horrible, horrible things.

Why isn't anyone, including these f*&^ing Kennedy's, doing anything for crime victims? Crime victims are not as cool, not as hip as gang banger scum. They don't want see any crime victims. While a victim of crime is terrified to leave their home, the Kennedy's are busy putting savages back out on the streets.

Women do horrible and violent crimes too. They are not saints because of their gender.

I would put money on this - if I needed bail, the Kennedy's and their bs foundation couldn't be bothered to help me. They would be falling over themselves to bail out any one not of their own ethnicity. That is stupid. I have no use and never did for their foundation. It aggrandizes those who encourage violence against whites, like that midget Spike Lee.

That is a lie about only being able to get a crappy job if you have a criminal history. You can have a criminal record and work for the City of NY. You can't have an open warrant but you can have all kinds of criminal background and still be a NYC civil servant. Open warrants are easily dealt with.

There are many people who deserve to be locked up for a long time but they never are. The Kennedy's ought to be looking into that. Or reading Colin Flaherty's books.

To "Oh here we go..." Actually there are a few references to race, such as the second comment about Joe Crowley turning his back on his own, or illegals taking over NYC or the one about the cops being on a fishing expedition to trap women in the hoods. Or 87% in Rikers being from a minority background. It's all over the commentary. But when bail is denied, jury trials are denied and mega prisons are built - it crosses all lines. It effects all of us. That's what we need to look at. Who knows, who's next!

>The myth is that some one is prison because of the color of their skin or for dealing drugs. They're inside because they're violent, sick people who have done horrible, horrible things.

Rikers is a jail, not a prison. The inmates haven't been convicted, otherwise they wouldn't be eligible for bail.
If they're accused of something so heinous, if they're such a clear and present threat, they shouldn't be up on bail at all. The government shouldn't be setting a bail if the accused is to risky to be out on the streets.

There are too many violent youth who never see the inside of a jail cell. I suppose those who support the lll advised Kennedy Foundation plan to post bail for criminals don’t live anywhere near such people.
They like to be far from their pets & domestic workers & yard staff.
The Kennedys don’t want to make the black kids angry- the title of one of Colin Flaherty‘s books.
Their foundation is helping create criminals

In Brooklyn if you ride your bike (food delivery) on the side walk you get arrested...NOT a summons....you really think someone should have to sit in jail because they rode there bike on a sidewalk and doesn't have the finances to pay the $1000.00 bail money.

I have a relative who works at the DA office...sees this all the time....and make him furious.

Tell your relative to get me a job at the DA's office. Is he/she an affirmative action hire?