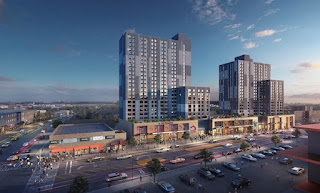 Construction has begun on the conversion of a former New York City Police Department parking garage in Jamaica, Queens into a mixed-use development that will feature more than 380 affordable housing units.

The redevelopment of the NYPD parking garage is the first major milestone to arise from the Jamaica NOW Action Plan, a $153-million neighborhood revitalization initiative announced in 2015 by the de Blasio Administration, Queens Borough President Katz and the NYCEDC.

In addition to the 100% affordable housing units, the Archer Green Apartments will also feature approximately 15,000 square feet of community facility space and 68,800 square feet of retail and commercial space. The project is expected to create nearly 350 construction jobs and more than 300 permanent jobs upon completion.
Posted by Queens Crapper at 12:26 AM

Nobody is going to want to move there who makes so much money. A few years back I was looking at this affordable housing thing and the requirements to live in flushing was like 25-35k per year for three people family household. But yet the requirements to move into housing that I qualified for which was 60k at the time for three people was located in the Rockaways three blocks away from project housing. Why would I qualify to live in the rockaways but not in flushing? Then I seen other affordable housing closer to the city in astoria I think it was and long island city and their affordable housing was like 110k for a 3 person household, which is still quite a bit out of reach for most people. They had nothing targeting the actual middle income makers who make between 60k-90k per year. They want to stick those people in the middle of the projects and bad neighborhoods. So something smells fishy with this affordable housing crap. It's not affordable to MOST that work because their income requirements are just ridiculous for the majority of people who work.

GOOD !! IT WAS A FUCKING ISORE. NOW ALL THEY GOTTA DO IS GET RID OF THE VAGRANTS IN THE AREA AND CLEAN IT UP !!

AND don't forget this location is right behind the biggest polluting poisonous waste dump, Royal Waste, which is a huge open air facility. Between the stench especially during hot summers and the large amount of truck traffic from it, plus the large municipal waste tractor trailer with garbage intact that park illegally under the LIRR one block from this place, SURE, what a great place to live..............not too mention, a homeless shelter one block away, a live animal slaughter house two blocks away..................and it is Jamaica.

What's the address of this?

.and it is Jamaica -

Doesn't matter it's Jamaica - if you build it they will come.
It has the LIRR / Airtrain /Multiple underground train lines.

Those that are thinking they are helping Jamaica better be careful. Get ready for the next LIC/Williamsburg- no one wanted to live in those places either.

You have young professionals that want to move out of their parent's homes, there are only so many places those just starting out can afford.

Opening up more housing isnt going to help the kids living with their parents move out, it will definitely be some outrageous income requirements that most people dont even have. Also all this affordable housing will just create more crowding. Do you really think that the landlords who rent apartments in multiple family houses are REALLY going to stop renting out that illegal conversion? They will just rent it out to some outsider or illegal. Our population doesnt need to grow anymore than what it is. The whole city is already a mess. Imagine another 1 million more people here? They need to start enforcing multi family housing laws and stop building so much "unaffordable housing". The city needs to start controlling the population that moves here somehow.

LIC is a much better place now thanks to gentrification but that trend does not work everywhere.

BULLSHIT. I lived in Long Island City before it became gentrified and filled with glass towers and it was a good place to live. Quiet, no traffic, no issues and it was cheap to reasonable to live there. Cannot say that now. NO gentrification never works because it jacks up property values to outrageous amounts that regular working class folks cannot live there. So no, it is not a better place to live now, just a very EXPENSIVE place to live with too many damn people.

Jamaica is finally being developed-- not urban renewed-- which was tried for the last 50 years. New good looking buildings are going up by the week, feet from the LIRR and subway, and young people who remember nothing of its past decrepitude will gladly move in.

Jamaica is finally being developed-- not urban renewed-- which was tried for the last 50 years. New good looking buildings are going up by the week, feet from the LIRR and subway, and young people who remember nothing of its past decrepitude will gladly move in.
----------------------

You must not get out much and see places. "remember nothing of its past decrepitude". What past, Jamaica is still a major shit hole of garbage, trash, crappy retail, poor food places, over 20 plus homeless shelter, dirty filthy parks, a huge garbage dump in the middle of it (Royal Waste), crime, gangs, and it is overcrowded and congested.

The past is still the present in Jamaica.

The affordable housing will go to blacks and Spanish and very rarely any other ethnicity or group. With the exception of LIC,the Chinese and Asians grabbed all of those real fast, before it was built all the way.
How can they gentrify Rockaway where the majority of housing is NYCHA projects, or subsidized places like Bayview Towers or Ocean View Village? It's saturated with assisted living poor houses, scatter site housing, Link Advantage vouchers, housing choice vouchers. The landlords get this money electronically the first of the month every month.

When the Social Security Administration Building was put up and David Dinkins extended the E line to Jamaica Avenue , that was definitely going to usher in a new level of prosperity for the neighborhood. That was what? 28 years ago?

All that's happened is more and more dollar vans driven by lunatics,many with out drivers licenses, more African street vending plastic things made by Tibetans in Chinese prison labor camps and gangs terrorizing schools and Jamaica Avenue after 3pm. This is what happens when you hold a group of people to lower standards of behavior and don't hold them responsible for their actions. Poor things are such victims, we must allow them to make more victims. Or they will burn down our houses and rob us in the streets.

There was much to do about the food court atrium . Last time I was there, the food was blah. There's a program through the Queens Library to assist with a food entrepreneurship program. Not sure what that means, maybe it means baking cakes for birthday parties and showers.
The food choices on Jamaica Avenue are dismal, the best bet is McDonald's where 2 years ago, I became ill from a fish filet and fries. Last time I ate at a McDonald's in NYC.

Jamaica Avenue is like a dying junkie on the nod for years. Please give it another infusion of cash, please, it's sick. It's dying. Give your government dollars.

I feel sorry for anyone who is hoodwinked into moving there.