Well that was embarrassing! 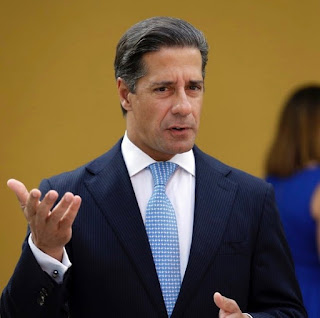 New York City Mayor Bill de Blasio announced Wednesday that Alberto Carvalho would be the new leader of the city’s schools. It seemed like a done deal ― until Carvalho backed out on live television the next day.

The de Blasio administration starting looking for someone to fill the position of city schools chancellor when Carmen Fariña announced in December that she would be stepping down. Carvalho, who is currently superintendent of schools for Miami-Dade County Public Schools, is largely seen as a rising star in education. De Blasio’s decision to tap him was widely praised.

But Carvalho has had a change of heart, he said Thursday at a televised meeting with the School Board of Miami-Dade County. The first three hours of the meeting had been dedicated to board members and community members making emotional pleas for Carvalho to stay.

Carvalho said the promise he had made to the children of Miami was more important than his agreement with de Blasio’s administration.

Not too shocking, deBozo is known for picking the wackos of the bunch. That Fariña lady was a weirdo too- everyone remember that day back in 2014 during a major snow storm when her and deBozo refused to close schools and said "its a beautiful day outside." Or this Carvalho guy realized joining up with deBozo would be career suicide.

This is hysterical on many many points and a great great great crack in the mayor's teflon cover, justified and deserved schandefreude for this debacle and long overdue bad karma for de Faustio.

Hipshit flunky Eric Phillips couldn't say anything more ironic and moronic in that tweet. For that more applies to his rotten incompetent boss than anyone else. Besides the citizens of Miami-Dade apparently would vote for him again considering the reason for Alberto's rejection

And this corrupt mayor de Faustio, this stupid fucking idiot, has now fucked himself and the city and officially made hiring a new chancellor harder because he offered Alberto a hundred grand more than what was paid to Farina to match his salary in Miami-Dade to take the job, which will certainly play in negotiations with future candidates for the position who will make a similar demand in salary. It will also mean that the next hire to come cheap or with the actual appointed salary will be an insider from the mayor's circle or someone like that idiot Bloomberg hired that didn't last a week.

De Faustio during his press conference which was made to announce his arrival that got kiboshed, asked the reporters in the room who he has treated with contempt the last few months about questions about his acceptance of bribes from and doling out preferred civic services to a dirty developer and stupid restaurant owner to look into why Alberto dropped out. But it shouldn't be that hard.

1) Alberto did not want to take over an education system that is an abominable mess from the profligate waste of the renewal school programs.

2) The obvious reason is that the Superintendent figured out what a corrupt, lazy, dishonest, unaccountable and toxic politician de Faustio is and wanted nothing to do with him and his neoliberal cult administration.

This is so good it's fattening. Mayor Big Slow's comeuppance is finally starting to manifest. This will be the only thing to enjoy while the city further turns to an high end pile of shit.

This played out the way it needed to. On Wednesday night I was surprised that someone with good credentials was actually agreeing to join this shitshow administration of the lame duck mayor who is going nowhere after this. DeBlasio has not been able to get quality people. Look at DOC: Commissioner resigned in disgrace and the only replacement they could find was someone else who was involved in the scandal! DDC also had a hack who was more interested in his teaching career and political prospects outside the country than getting things done. And the list goes on and on.
Someone must have told Carvalho that this is career suicide.

But not only has the mayor made it more expensive to hire for this position, he just aired the dirty secret of city compensation for most positions. Salaries are supposed to be fixed, but you routinely find that some people get more based on who they know. Good luck convincing people to take 8-10% in negotiations when you're handing out over 50% to some.

Mr. Calvaho knows an upcoming train wreck when he sees one

Check out Eric Phillips twitter feed. His responses to criticism are blown off with snide "have a nice day" retorts. He is a snarky sociopath. Once de Faustio's term ends or finally gets indicted (there is still possibility for the latter), Eric will probably get a writer or comment moderator gig at the renewed Gothamist.

Better life in Miami than having to deal with Duh Balsio. FU mayor Billy socialist!

Only slackers, liars, and criminals work at City Hall.

One more thing. The dope from park slope broke the law he enacted to prevent unscrupulous hiring by businesses, by hiring a guy based on his past salary. Well, trying to hire since Alberto wisely turned it down, so technically de Faustio gets away with trying to circumvent the law, or in his case the spirit of the law again.

What a stupid fucking idiot.

Maybe he realized the salary match didn't mean shit when state and local taxes were figured in.

Why would he leave sunny Miami, which has no state and city income tax, relatively clean, to come to cold, snowy, filthy, high-tax city? Don't many NYC residents move to FL when they retire?

The African-American activists in NYC were about to pounce on this guy for dismissing black majority schools in Miami. He didn't need to defend himself before he started.

Who would ever hire an entrenched spokes-liar like Eric Phillips? Between himself (and his zero credibility), and the openly practicing, criminal-psychopath to whom he reports, inside of City Hall's most disgraced, dishonored and derelict mayor, they both devalue honesty itself——to pathologically traitorous and tyrannical effect!

Worse, this con artist who continues to pollute City Hall doesn't have to pay his millions in legal fees for his openly practiced bribery, corruption, graft and greed, and We, the 'SHEEPLE' are stuck with this unconscionable tab.

WHERE THE F**K ARE ANY CONSEQUENCES? EVEN ORGANIZED CRIME FAMILIES ARE STARING IN DISBELIEF AT THIS HEIST!

I'm still waiting for de BLASS-hole's wife to get rid of those two lackey assistants of nepotism, for whom We, the People are paying more than $300K a year, when she's not a publicly elected official!

Why aren't there protests at City Hall? Where is the rage and civil disobedience? That's YOUR tax dollars, New York City residents! Why isn't the free press hammering away at this, the way they did with another crony, Rachael Nordlinger?

THIS IS WHAT TAXATION WITHOUT REPRESENTATION (and corruption, graft and greed) LOOKS LIKE!

WHEN WILL TALL & STUPID BE HAULED OUT OF CITY HALL IN HANDCUFFS WHEN EVERYONE ELSE WHO BRIBED HIM IS FACING TRIAL (but, NOT the one who accepted the bribes?)?! WHAT KIND OF CROOKED SYSTEM OF JUSTICE IS THIS?

I'm still waiting for de BLASS-hole's wife to get rid of those two lackey assistants of nepotism, for whom We, the People are paying more than $300K a year, when she's not a publicly elected official!

AND the same came be said for Trump and his whole entire family on the payroll, being chauffeured around, have secret service, etc.

Face it folks, Republican, Democrat, they are pretty much cut from the same cloth and this whole idea that dicBlasio is a liberal progressive, no way, none of his polices are liberal or progressive, for if he really was marijuana would be legalized in this city/state. Releasing prisoners like he is doing in Riker's is not a liberal progressive thing. Many folks at Riker's are in their selling pot or having pot on them. Are jails all over are filled with people like this. Legally pot is progressive and both liberal/conservative in nature.

Stop being fooled. Both parties want us divided into camps, so we have less power as a whole and they can do whatever the fuck they want and distract us. Trump, deBlasio, Comrie, Katz, Cuomo, Guilliani, Bloomberg..........they are all the same. No one is attempting to cram socialism into America, even though we already have two of the biggest major socialist programs, Social Security & Medicare and none on here or elsewhere are complaining about that. But some Republicans like that dick rich Paul Ryan would love to smash that into pieces.

I think the news is fulla shit.

The guy got pissed when he learned he would have to turn in his guns and WORSE his CCW permit would not be honored in New York.
I think he also di not want to be a puppet knowing deBlasio would not allow him to work without massive interference,

Ha, he probably came to his senses...stay in Miami, the weather is better

This man has serious credentials....why would he ruin his reputation by going to work for a cultural Marxist administration that employs ne'er-do-wells, sycophants, and androgynous nincompoops.

Could it be the intersectional feminist, emasculating, liberal orthodoxy that the current education system fosters on our children?

Doubt it, but during this chaotic, post-modern, American shitshow everyone seems to be suspicious of each other. No one knows whom will be targeted and destroyed or doxed next. The left is eating itself. The blue church is crumbling and the children of blue have no master....

WAIT, HE OFFERED CARVALHO $100,000 MORE THAN FARINA? HOW SEXIST OF HIM. ISNT HE A PROGRESSIVE WHO BELIEVES IN WOMENS RIGHTS ?