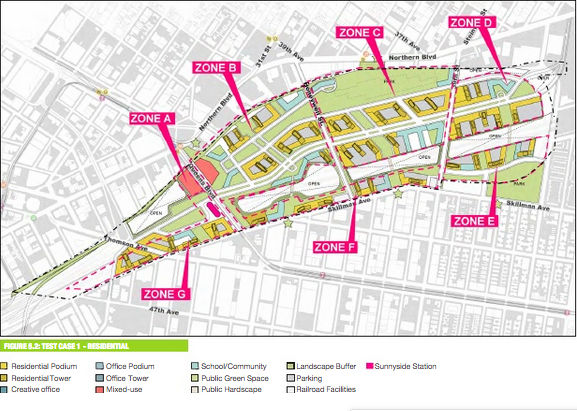 The city has tapped a team led by architect Vishaan Chakrabarti to develop a master plan for the 180-acre train yard in Queens that Mayor Bill de Blasio imagines being decked over with parks and tens of thousands of apartments, several sources told Crain’s.

Sunnyside Yard, the canyon of tracks between Long Island City and Sunnyside, has long been eyed as a development site of epic proportions. In February of last year, the de Blasio administration released a study showing that it would be possible to construct a deck over 85% of the pit to support some combination of commercial, retail, cultural and residential buildings and open space. In one scenario outlined in the document, that translated to 24,000 apartments and a price tag of $19 billion, a cost on par with The Related Cos.’ Hudson Yards project on Manhattan’s West Side.

Chakrabarti’s firm, PAU, declined to comment, and the city’s Economic Development Corp. said that it has not officially designated a team. However, several sources with knowledge of the process told Crain’s that PAU has won a request for proposals that the city issued in November.

That means the firm will likely be tasked with building on the city’s preliminary work and drawing up a more specific development scheme, which will also account for required infrastructure and schools, a process officials have estimated will take up to two years. Because of the time needed to hash out a proposal and the daunting logistics of building a deck and columns over an active rail yard, the biggest decisions about acting on the master plan will come after de Blasio’s term ends in 2021. However, the administration has argued that coming up with a set of blueprints now is crucial to ensure that Amtrak, which owns most of the yard, can take the city’s aims into consideration as it upgrades its own facilities.
Posted by Queens Crapper at 7:00 AM

"...for the 180-acre train yard in Queens that Mayor Bill de Blasio imagines being dicked over with parks and tens of thousands of apartments,"

Fixed it for you

I have a study.

A chart of elected officials and how many showed up for meetings, how many introduced actual bills that helped their community, how many did not cave to lobbyists & developers, how many actually have solid actions that directly improved their community. Something called ACCOUNTABILITY for stealing tax payers dollars to fund their piggy banks.

Then do a study on the break down of the homeless: how many from out of state/city/country, how many have been chronically unemployed for more than 6 years, how many are addicts that have never entered a program, how many have more than 1 child, etc, so the public can get a clear overall picture of this 60,000 figure always being thrown at us.

In the 1980s Sunnyside Yards was touted because of the nearby power generation which provided efficiency without transmission loss.

It’s a former glacial swamp they will need to drive perhaps 50,000 piles (years of hammering) the rail company's will never have it. It will F__ up the whole eastern rail corridor and adjacent neighborhood. Decades of misery.
Destroyed streets & adjacent structure foundations, gas @ sewer line breaks, lawsuits.
Total chaos, this "study" is tossing money down the toilet.

This is a Queens-wide problem. A massive fire in a highrise here would pull FDNY from every other part of the boro. No sewage treatment will result in more actual poop in our waterways and beaches. No power supply (or even talk of using renewable energy) will tax the feeder cables, and we'll have the week long astoria blackout all over again.

The only thing DeBlasio sees is the money. He's not interested in these details. If they want to build this, there needs to be something in it for Queens. And not just something: a lot. Enough is enough.

The conclusion will be.
Underutilized space. Luxury housing needed.

Sardine time for Western Queens. Keep packing them in.

The only people benefiting are the ones who were hired to do the study. God I wish I was working for that firm. $$$

I can guess what is going to happen. Cuomo will pass an executive bill giving the state the land just like he aims to do with the area around Penn station.

I believe Cuomo cant do shit, isn't distribution of railroad land is a federal issue like interstate highway system?
I think this is all bullshit just like the study that comes around every 5-10 years for the New York State Pavilion. Its a bone toss for "special interests" hired to do the mega money study's for job security. Epidemic of useless spending and special favors going on ever since Obamacare and all the recent state wide gunpoint mandates.
2: The mayor also wants all "them pain in the ass" NIMBY small homeowners to get scared and sell.

The same shit is being pulled in Blissville and soon, no doubt coming to Middle Village or Old fresh Pond Station, Farmers Oval area thanks to Bob Holden inviting the Mayor and showing that sick bastard around.
--BAD BAD MOVE BOB HOLDEN, Worse then inviting Dracula into your home. deBlasio will back stab you and all of us so please dont bring him round here nomore.
We did not vote you in to try and make friends with that bastard (note the word "try" here) You would be crazy to trust him or nor uphold any part of a bargain.

At the last civic meeting, Holden said he was given 30 minutes notice that the mayor was planning to visit. Apparently BDB is afraid of Bob's rabble rousing over Rikers. He didn't invite him over for tea.

I don’t give a shit, no excuse hopping to the 30 minute mayor’s call, in a blizzard no less makes this WORSE!!
People didn't elect Holden to be break bread with the enemy or start pulling this same Crowley "putting on skirt & kneepads" shit every time the mayor come calling. No carrying the water spin accepted.
In the videos making the rounds Holden is clearly escorting the mayor around. Hey, you never show (let alone personally escort) vampires around your home because vampires, crooks and snakes can only be expected to behave as vampires, crooks and snakes. This SOB Marxist mayor is ESPECIALLY no exception and that's a 100% proven fact!
The English language contains a word called NO (and several other common word group expletives) which Holden could have used but didn’t.
We did not elect him to be another Crowley
The chicken shit mayor (even afraid of old ladys) pulled this 30 minute surprise so nobody knew this it couldn't leak to citizens and news cameras that would have shown him being booed and snowballed like Ed Koch.
I would have escorted Deblasio to the Fresh Pond bridge and said jump. As in down to tracks with the rest of the garbage.

--Shit, I knew this would be the first (and last time) I will cross my line and vote for a Democrat! Whats wrong with these people? --and dont say "Holden trying to work with him" because that's never gonna happen. Hmm, Can pigs suddenly fly? I dont think so and I'm still shaking my head in disgust.
Anyway Happy Easter everybody, dont let the bastards get you down

I don't know, he brought him to a diner and a pizza joint on a snow day. These are both publicly accessible places. I think you need to chill, Joe. I hate deblasio, but there is a time and a place to stand up to him and a social call where you get 1:1 time with him isn't it.

"and a social call where you get 1:1 time with him isn't it"

I believe it’s perfect because if I had that asshole suddenly "parachuted" into my house or business without his mob of bodyguards, press and police I would have side booted him right in the ass and said get the fuck out the neighborhood.
--And, if you ask anybody who knows me personally they would tell you "oh yeah" not only am I his size, drug free and more fit but would I do it and have plenty of support for legal expenses, not fear being arrested or spending time in jail.

The only thing I would consider before acting is why should I fight or go to jail on national news for a majority of asshole sheep that rewarded this asshole and Bloomberg with re-election.
The truth !!

@Joe: You don't make peace with your friends. Let's see what Holden can accomplish before accusing him.

My friends isn't to happy about him breaking bread with the mayor.
The consensus is everybody I know don't want him to do anything because that would require making deals with the mayor. Holden's job is to obstruct every dam thing the mayor wants to do till DeBlasio term is up. Treat the mayor just like the liberals treat Trump.
Make NO DEALS with Satin. Another soccer field, ball park in exchange for a housing project or Asian box or birdcage a top a 1920s flat is not worth destroying a neighborhood.

Holden has to fix the zoning and establish "anti crap" architectural standards first.
This Lego shit and birdcages on roofs atop beautiful 1920s flats in Ridgewood needs to stop right now before every landlord is handing in plans to add floors.
At LEAST have these nasty rooftop birdcage extensions set back at least 20 feet from the front façade so you don't see then from the ground and limited to two 1BR studio units.
If the mayor agrees to a blanket deal and makes it happen as in "passed" then make deals, otherwise shellac the mayor every way possible.

Passing of some kind of "anti crap" architectural standard of construction must come first. In the age of Home depot and computers being the architects, an update on cosmetic standards is needed ASAP.

Not sure what you're referring to, could you post a photographic example?