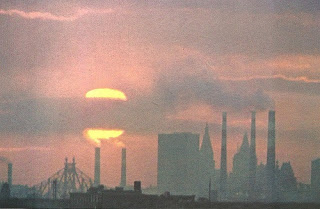 In an announcement tied to Earth Day, the mayor's office said the requirements, along with city programs and incentives, would help kickstart the mayor's goal of cutting building emissions dramatically over the next 35 years.

The mandates are a significant development for the city's real estate world. When de Blasio announced a plan two years ago to cut building emissions, he threatened mandates if private developers did not act quickly enough. After more than a year of meetings with a technical working group, the group submitted a report recommending the mandates.

The city estimates the measures will reduce greenhouse gas emissions from buildings by 2.7 million metric tons — the equivalent of taking more than 560,000 cars off the road. The mandates are also expected to save building owners approximately $900 million in energy costs each year and create an estimated 1,300 direct construction-related jobs, the mayor's office said.

We've always known that it's BUILDINGS and not CARS that produce the most pollution, which makes the city's focus on putting bike lanes everywhere to green the planet such a joke. I finally agree with de Blasio about something. Too bad he's probably going to be indicted soon.
Posted by Queens Crapper at 6:08 AM

So, there is a free lunch? No costs at all to these mandates, just benefits???

De Blasio's developer buddies will get a pass on this because that's what political donations are all about.

""Too bad he's probably going to be indicted soon"

More like committed and could never stand trial. The man is very ill

Actually is more like theft. Money confiscation scam, soon will be illegal to disagree with the fake science behind this FRAUD.

How exactly do they propose to reduce emissions? Switch all of the oil burners to natural gas? The existing infrastructure barely holds together and NIMBY's reflexively block any gas pipeline project.

This will seem like a good idea until the next really cold winter. Is it even possible to reduce emissions significantly AND mandate heat and hot water minimum temperatures? Seems to violate the laws of thermodynamics. Sure, boiler tune-ups and gas conversions may help, but how much and who's going to pay for it?

DiBlasio is stabbing his real estate cronies in the back?

The fix must be in somehow.

Sure, boiler tune-ups and gas conversions may help, but how much and who's going to pay for it?
----