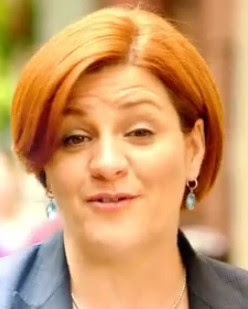 The number of families living in the city’s shelter system is now at record levels, with 12,302 parents and kids calling a city shelter home.

The city quietly reached the sad milestone Wednesday, according to stats from the Department of Homeless Services.

The previous high was in December 2014, when an average of 12,281 families a night slept in shelters.

“The problem is growing and therefore the capacity of the system as it exists today is not sufficient,” she said.

(Women in Need runs shelters throughout the city.) The mayor is doing a bang up job on this issue, as usual.
Posted by Queens Crapper at 8:43 AM

Strange how so many former City political hacks go into the 'non profit' business supplying homeless shelters. All thru no bid contracts of course.

Well, the real issue has been all the jobs that have been shipped to other countries for decades (thanks NAFTA) and stagnant wages.

Our infrastructure is falling apart and millions of new jobs can be created right here in the USA, but NO, we can't do that. Big blame there goes to Republicans, but both parties are to blame for lots of the shit that led to this.

A country works well, when the majority of people are working and working with decent pay. It is not rocket science.

And, here's what New York City wants, Christine---for you to slither away into political oblivion, where you rightfully belong!

Your master and demigod, Michael Bloomberg, murdered New York City (with you as his diabolically voracious accomplice!), right AFTER 'His Crookedness' transformed Manhattan into a luxury brand (strictly for tourists, transients, elitists, Hollywood moguls and Washington insider sociopaths), and then he invited all of his crooked-and-sleazy developer friends to finish off the city with the ravaging, all consuming force of a locust swarm---that left NOTHING in its wake!

It's just amazing how this 'pudgy parasite' keeps showing up (or, rather 'oozing onto') wherever she's already destroyed all pretense of public trust and integrity, where she now DEVALUES all honesty itself---to pathologically treasonous, traitorous, ruinous and monstrously self serving effect!

So, what is her reward? An unearned, undeserved guest appearance last year on 'REAL TIME with BILL MAHER' (another loud, mouthy, New Jersey-brained idiot of extreme, liberal fail!), and a cozy, cushy, state appointment by Albany's own political-hack, job creating bloodsucker, Andy Cuomo (HIMSELF, soon to be hauled off to Federal lockup, right alongside the other two dethroned, 'Albany Kings'---'Shilly Shelley Silver,' and 'Dickheads, Dean & Son Skelos---all of whom are an embarrassment to ACTUAL primates), and, now 'Gorilla Girl Christine'!

Go back to your crypt, 'Un-mighty Quinn'---you're a filthy disgrace that reinforces everything that is wrong with all failed city government---and corrupt, dehumanizing and reductive politics (and failed politicians---not public servants!), overall!

When does she sleep? So effin corrupt!

SHE SHOULD GO BACK TO LONG ISLAND WHERE SHE'S FROM INSTEAD OF PREACHING ABOUT WHAT THE CITY NEEDS TO DO MORE ON.

How the mighty (Quinn) has fallen.

Still doesn't have a real job. She won't or more likely can't get one to make an honest living.

How about giving away less free stuff and STOP waiving the "come and get it" flag?
Sanctuary city my ass, these shelters are 1/2 full with single illegal immigrant woman with lots if children. Many are prostituting to send the $$ back home to smuggle the rest of the family and children here thanks to the mayors sanctuary city policy. BTW these people believe "anything to take or steal is game" because all of America was stolen Mexico. Schools in Mexico & Central America teach this propaganda.

Big riots and problems that will outnumber the police and NY Fire department are coming. This mayor and administration is worse then the Dinkans era, perhaps the worst and most damaging in NYC's history.

"A country works well, when the majority of people are working and working with decent pay"

What kind of paying job are you going to give to a person who cant read or write and is illiterate in any language ? That's what 90% of these people jumping the fence are. Worse our own kids today are good for nothing also. Thanks to bad parents having the Disney MTV babysit them as children all most wanna do is art, singing & dancing. Stupid liberal arts shit they will never find a paying job at.

I haven't a clue how Trump is gonna fix this massive brain atrophy problem. These kids are so stupid when told Leonardo DiCaprio was placing windmills on his private jet going 500MPH to create massive free energy 8 out of 10 ninth graders they actually believed it
And MORE dumbing down in our jam packed schools is coming when a good 28,000 of Obamas 200,000 Syrian refugees arrive in Queens.
Voters better wake up !!!!

They are not for the homeless silly, but jobs for the party stalwarts.

Just not in MY neighborhood!

It is worrisome and annoying that Long Islander's have so much to say about the city. The NY Post is the worst about this, printing all manner of complaints and suggestions from suburban people who are only marginally impacted by our city.

I absolutely agree with one of the anonymous comments regarding SUBURBANITES who chime in on the city's problems when they were never born or raised here. If you hate this city so much, quit your high paying job in Manhattan and go find one in West Bubblefuck!!

How the hell would building more homeless shelters break the viscious cycle of homelessness???

Somebody starting an early mayoral run??

Long Islanders can complain about NYC all they want to.
I , a proud NYC resident, am safe from paying their excessive real estate and school taxes.
So FU in spades. Suburbia ain't the "paradise" it has been touted as.

I can't believe this dim wit is still around. I thought she would have moved to Buffalo or Plattsburgh and try to run for mayor.

Where did you dig up this piece of detritus? Put her in a shelter. Then lock it up and throw away that key. This is a destroyer of democracy in NYC. Don't give this treasonous bitch another second of attention.

I , a proud NYC resident, am safe from paying their excessive real estate and school taxes.

You pay more than the property tax difference in your NYC income tax. Enjoy your crappy city schools!

Considering the administrative pay of officials who run these non-profits and the benefits and funding they accrue from government contracts. Non-profit is a total oxymoron.

This woman just refuses to accept the fact that she has no credibility and no say in this matter and crisis. For it was because of her and shitty council and a pogrom of billionaires made it possible for the fun size mayor to run for a third term, violating civic rules and the voting public. Which resulted in the maniacal rubber stamping and fast-tracking of rezoning and upzoning that has led to all this hyper-development and diabolical market speculation leading to the displacement of these families from their homes and apartments.

"...the maniacal rubber stamping and fast-tracking of rezoning and upzoning that has led to all this hyper-development and diabolical market speculation leading to the displacement of these families from their homes and apartments."

This is our entire issue in a nutshell. There is a dreadful structure now across from the Poppenhuesen museum which resembles a Jacob Riis photo.

You may ask why have children if you can't support them. Silly me, don't you know that these are the golden children, jackpot babies, anchor babies. An illegal alien gets pregnant one month before she comes to the USA and then pops out another one to keep her in the country, the children-now US citizens- get all the government benefits. a reason for the mother not to be deported. The Chinese make a big business out of this.

Those families know that being in the shelter for a certain period of time will get them the housing subsidy voucher. AND families get their own self contained units. Unlike single people that are housed in dormitory style rooms, full of the untreated mentally ill, crack heads, thieves and violence.

Are these traditional families or families such as the one who live in my building? The mother and two children get a housing subsidy voucher of $425 every two weeks. ($850 per month) rent is $1350. They pay $500 for a family of four. Four? yes, Daddy lives there but is not on the lease because his income is too high for a housing subsidy and that's why they can't get married. And Mommy can't depend on Daddy anyway, he can live off her & the kids, no need to get full time job. What kind of family do you call that? I want a housing subsidy voucher to pay that portion of my rent, too.

What amazes me is how people like Christine Quinn do not take care of their own, while all the other ethnic and special interest groups are busy taking care of themselves.