The LPC: As arbitrary and capricious as they wanna be 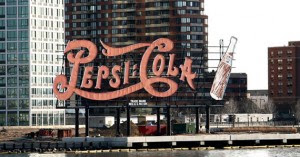 You have probably heard that the Pepsi Cola sign in LIC has achieved Landmark status, but consider this from The NY Times story:

"The Artkraft Strauss Sign Corporation reconstructed the sign in 1993, after heavy damage was inflicted by a winter storm."

I am certainly not an expert on NYC Landmarks but this appears to be a contradiction of a previous decision by the landmarks commission concerning Old St. James Church of Elmhurst.

If the Pepsi sign was totally reconstructed and granted Landmark status why hasn't St. James, whose appearance has hardly been altered since the 18th century, been treated in the same manner?

I guess the Manhattanites have decided that an ancient Elmhurst church isn't as cool as a 20th century LIC commercial sign. Go figure.

Yes, Philipe, I think you have nailed it.
Posted by Queens Crapper at 6:15 AM

The LPC has about as much integrity as the BSA. They are horrible panels of really constipated people who toy with our precious neighborhoods. We need a new mayor and we need to fire them all.

We were supposed to get a better deal, regarding the LPC, when Bloomberg was finally deposed.
If any of you believe that after Di Blasio gets dumped that there will be any improvement at the LPC...lazy partners in crime...you are dreamers.
REBNY is the silent....maybe not so silent...mayor of Gotham City!
Since Koch, every preservationist has been waiting for a new mayor that would curb the LPC's capricious constipation.
Only a LAWSUIT served the LPC on a golden plate would move those anal retentive nincompoops into movement.
The landmarks law itself cannot be challenged on Constitutional levels. That has already been upheld by the Supreme Court on numerous occasions.
HOWEVER...suing the LPC on the basis of arbitrary application of the law...with, perhaps, YES, even a racist elitist agenda might put a wake up broomstick up their asses.
I would suggest finding a good pro bono lawyer instead of making wish lists of a good new mayor. All else is just the same kind of constipation echoed by many historical societies. The groan and moan but lack ANY real gumption or creativity in problem solving.

Don't you all get it? Read between the lines of the landmarks law. It was set up to protect the tourist corridor, being MANHATTAN mainly!
If complaining that Queens is not getting it's fair share, they deserve it. Peep, peep, peep, instead of screaming and holding YOUR LOCAL OFFICIALS, who suck up to REBNY (like Paul Vallone) responsible for selling you all out.

Philipe. Brilliant. Absolutely brilliant! How come nobody else noticed this?

Amen, Anonymous---the city is a SCOURGE of systemic corruption, greed and graft that never ends. It's not enough to reform---the entire system of crony government needs to be overthrown---from the top mayoral disgrace-and-dysfunction, all the way down to the feckless city council of epic, humanitarian (and ecological) fail)!

And, with each passing day that We The People don't demand REVOLUTION, it will only cross over to full blown REVOLT---and, just like history has proven, it will be too late to avert the carnage that always follows complete, political demise and downfall---for whom the exploiters never end up paying the price!

But, like the Clocktower Building that needed to use this law to transfer air rights, while Elmhurst, Douglaston, Richmond Hill could go f*k themselves, not a single person in government in Queens made the slightest show of concern on the misuse of the law.

But then, again, they pretty much ignore us except to clutter or in box with the hand out for a donation or a breathless press release on the banal or the trivial.

Two people that have to go is Mitchel Grubler (who made a rare apperence of actually doing something by emerging from his hole to push for this Real Estate hood ornament), and everyone's favorite, our boro historian who is indeed, as his title implies, a real ass.

If I am not mistaken the Episcopal Diocese of Long Island owns Old St. James. They also owned St. Saviors in Maspeth and sold that edifice about twenty years ago to Asian Methodists who didn't care and they sold it to a developer. The diocese probably wants to sell Old St. James to some Asian developer who will demolish it and put up more retail stores.

Grubler doesn't believe in going after the LPC because he think it's the average citizen's best defense against REBNY, and thinks you're all a bunch of wackos not to do the same. Begging for scraps is not laudable.

It is true that the local Episcopal parish does not own its property - thus, when parishes around the country have left The Episcopal Church (TEC) over Biblical authority, ordination of gays, etc., TEC has gone to court to have the property returned to the diocese. I'm not a shill for TEC, but I would have to say that the majority of Episcopal churches are struggling: St. Margaret of Scotland in Fresh Meadows closed over ten years ago; St. Paul's in College Point closed about five years ago; and Grace Church in Whitestone is in a deep financial hole. The Episcopal Diocese of Long Island runs St. John's Hospital in the Rockaways, and I would wager that that is far from being a profitable venture, but rather is a charitable cause. Ditto for the nursing home that the diocese runs in Brooklyn. Most of these churches, with dwindling memberships (and therefore dwindling budgets) would rather spend on soup kitchens and food pantries rather than upkeep of property. Although the Episcopal Diocese of New York is separate from Long Island, why do you think that the towers of the Cathedral of St. John the Divine will probably never be finished, even though it's over a hundred years old? Because the priority of the congregation is to spend the money on social services, because they feel that's more important, as well as upkeep of the physical plant.

It's the same scenario with the historic Elmhurst Horse Brook home at 90-11 56th Avenue, which is over 300 years old with a lot of history, but the LPC claims it does not deserve landmark status.

I referred this to George The Atheist the other day. I knew something was off and stunk about that sign and the absurd and cynical justification for preserving and landmarking it.

Even for aesthetic reasons, it's design is a ripoff of the Coca cola logo. Good muckraking by phillipe. But the tower people, doe-eyed tourists and the REBNY pogrom thinks it's pretty.

Warhol didn't become significant after he left advertising. Re: Marliyn and Elvis recreations and the Velvet Underground & Nico.

If that is the case the NY Diocese of the TEC should sell off St. John the Divine to developers. Can you imagine what the profit from that sale would do for charities?

And while they are at it sell off Trinity Church. Hell it's only designed by Richard Upjohn the same architect who designed St. Saviors and it is over one hundred years younger than Old St. James. Imagine the amount that could be realized from that sale?

Seriously, again it's only Manhattan sites that are considered sacred by the Landmarks commission.

Geuebler, or, Grumbler , as many like to call him, is a lazy butthole...symptomatic of almost ALL of the so called preservation groups.
They are in love with the smell of their own feces thinking it's French perfume.
How powerless these emasculated groups really are. They are even afraid to open up their mouths beyond twenty degeees.
YOU ARE THE MAIN PROBLEM NOT THE LPC!

Geuebler, or, Grumbler , as many like to call him, is a lazy butthole...symptomatic of almost ALL of the so called preservation groups.
They are in love with the smell of their own feces thinking it's French perfume.
How powerless these emasculated groups really are. They are even afraid to open up their mouths beyond twenty degeees.
YOU ARE THE MAIN PROBLEM NOT THE LPC!
----
no the problem is with the people of queens accepting this. calling them names and doing nothing does nothing.