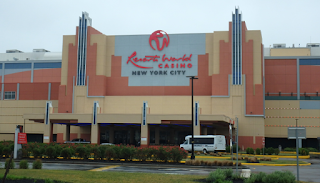 Tens of millions of dollars in revenue from Resorts World Casino at Aqueduct slated for state education will instead be invested in capital spending to expand the site, according to an agreement in the 2016-17 state budget approved last week.

Assemblyman Gary Pretlow, a Democrat from Mount Vernon, estimated the award to be $40 million a year going to Genting New York LLC., which operates Resorts World.

“That would be money that should be going to education and not to Genting, which is one of the richest companies in the world, a multi-billion dollar corporation,” he told POLITICO New York. “They don’t need to take money from children of New York to build a hotel or for any other reason.”

But state and Resorts World officials insisted that in the end, the investment will result in twice the amount of money being used for the casino's growth.

“Now that we are eligible to participate in the State's capital allowance program, we will be able to embark upon a considerable expansion of our facility, which will be developed in consultation with our local community partners,” Genting senior vice president of public affairs Michael Levoff said in an emailed statement. “This investment will lead to increased visitation, more good-paying local jobs and a significant increase in overall revenue for New York's education fund.”
Posted by Queens Crapper at 6:50 AM

I thought Resorts was losing money. They laid off a number of staff and even cut back on security over the last few years.

This is Cuomo's way of Investing in the Future? Might as well bet it on red 19.

Corporate welfare to put it's true regular customers on welfare and to keep people already on welfare.

Abominable. But again, tourism is more important than the people who have to actually live, work, commute, raise kids and pay rent and bills here.

This is on the heels of a preposterous focus of South Ozone Park by the Queens Tribune in their travel guide passing as an anniversary issue.

"But state and Resorts World officials insisted that in the end, the investment will result in twice the amount of money being used for the casino's growth."

Why must the taxpayers finance the growth of this publicly owned company?

I forgot, they contribute to the Albany politicians campaign coffers so we must kick back multi-mullions to them.

Do I as a NY State citizen get a discount to Resorts World for providing them with this largesse? No. But the politicians get cash.

South Ozone Park has become as seedy looking and crime riddled as can be. It is looking more and more like the area surrounding Atlantic City. Time to sell! Let Cuomo and his henchmen pick up the pieces.

WTF? and NYC students continue to be screwed: as I recall, the court-ordered settlement from NYS to NYC has not been paid...

This is a tough one.

Give the money to a billion dollar company or throw it down the disgusting trash chute that is the NY public school system?

I like how the idiot politician says its taking money away from the kids. More like out of the pocket of the politician and union thugs.

I have zero sympathy for either side and don't gamble either.

To the slimy, corporate, blood sucking Michael Levoff---the RACINO has been a toxic blight on the landscape of South Ozone Park that has NEVER PRODUCED ANY AND ALL GOOD PAYING JOBS---it's a KLEPTOCRATIC PLUTOCRACY that has all but SUCKED the life and all pretense of good wage-paying jobs out of living with health and happiness itself---to pathologically anarchistic outcome and effect!

And, the corrupt politicians that have always been behind this blight of systemic greed, graft and epic, humanitarian fail are even more contemptible for their voracious greed, dishonor, dishonesty and disloyalty---all of which now DEVALUES all honesty itself!

Ladies and Gentlemen of Queens County (the 'tonsured' borough of all things COMPLETELY ravaged!), THIS IS WHAT A POLITICAL SCOURGE LOOKS LIKE---and, only getting worse by the hour!

Alas, JQ, the Queens Tribune is yet another completely 'soiled' dishrag that is owned and operated by all depraved, political corruption and control---exactly like the vile, vapid and politically vacuous Queens Chronicle---and, the most toxic, radioactive dishrag of them all---the Forum of Queens---whose subhuman, walking corpse of a purported publisher makes hell look like heaven!

They all stink up Queens County like nothing else---I wouldn't even wrap fish in any one of these politically tainted rags!

In the end, TRUTH is TREASON---in an EMPIRE OF LIES---and, the hyper-corrupt politicians of Queens are the reason for why all lawlessness, vigilantism and anarchy continue to prevail---from the very top on down---only, THEY never pay the price---their fed up and disgusted constituents do (again, still and forevermore)!

Good grief! Will it never end? How many "tourists" will come from Manhattan via the El and a bus to gamble in Queens? You have to be kidding me? This nothing more than out and out graft sanctioned by all the politicos in New York State and especially Queens.

But come to think of it, it really makes a lot of sense. If our children don't get an education they can't understand what's going on. See? Perfectly logical.

Well, I have an education and I say: Somebody is getting paid off and it doesn't take a PHd to figure out who is benefiting.

This is way over the top. I wish I had a magic wand. I'd vaporize all these crooks. And they wouldn't be missed.

Thank God nyc public pensions are unfunded so schools and welfare don't take the hit,just wait until the city tells it's employees they can't pay thier pensions then the fun will begin
Work your whole life and get shafted.
Politicians should be blind folded and put against a wall and .....

You have to VISIBLY PROTEST, EN MASS, all Queens residents, to get any attention that passes for democracy---just like the citizens who live near Belmont Racetrack, all of whom recently voiced a resounding 'NO' to casino gambling, which, besides all political scourges of epic fail, are the bane of any civilized society (currently in mid-level progress of societal collapse, and outright anarchy)!

Hence, the politicians of Queens county are the REAL SCOURGES who WILLFULLY REINFORCE ALL of the ever growing social ills that plague our blighted neighborhoods, countywide. Here, in Ozone Park, the filth and graffiti make Detroit seem most appealing by comparison---but, despite all of my outreach to our community's corrupt and dishonest politicians (all of whom continue to practice 'selective' and 'occasional' representation, by their rigged, 'Friends & Family' payrolls---and, leading the was are sleazy, criminal sociopath, Joe Addabbo and resident sock puppet, Eric Ulrich!), not a single one of these mangy sewer rats have ever walked the streets and showed any hands on visibility in the very neighborhoods whom they purportedly represent.

And, just like their vacuous jobs and payrolls, it's yet another 'Phantom' snow job of epic, humanitarian (and ecological) fail!

Welcome to the official gateway to the Fourth World---better known as Queens County---where all political filth, greed and graft are honed from their breeding point!

'Well, I have an education and I say: Somebody is getting paid off and it doesn't take a PHd to figure out who is benefiting. '

I too have an education.

Why are we paying for a private company to expand their business? WTF?

Soon we will have 2 Sheraton's within less than a mile radius.
Will just call FalaSheng MACAU of Queens!
Who needs fucking Vegas?

Doesn't matter, every $ from gambling sent to schools is taken back to general budget so they never gain.