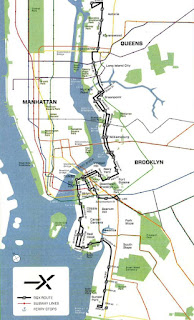 A city-commissioned study of the proposal, which the city shared with POLITICO New York, fleshes out the projected travel habits of the communities through which the line would run, bolstering de Blasio’s argument that the $2.5 billion streetcar is theoretically doable, and underscoring some of the challenges ahead.

According to that study of the proposal — which originated in the real estate community — the administration projects 193 Red Hook residents would use the BQX daily to commute to DUMBO. Twenty-six would take a trip in the opposite direction.

Using projections based on 2013 data, the report also predicts that Astoria would send 51 commuters a day to DUMBO, and receive none in return. It is in Astoria, the streetcar's northern terminus, where the de Blasio administration will begin to seriously engage community members about its streetcar plan.

At the Variety Boys and Girls Club on 30th Road on May 9, city officials will lead the first of three-months worth of “visioning sessions” for people who live along the proposed streetcar’s route, which would run up to 17 miles from Astoria to Sunset Park at a pace of roughly 10.5 miles per hour during peak hours.

Wouldn't it be better to spend $2.5M to improve current bus service than to build a streetcar line that hardly anyone will use?
Posted by Queens Crapper at 5:30 AM

Hold on folks. Der Mayor will be warming a federal jail cell soon if he does not get impeached first.
Hmmm....the Variety Club....wasn't that the steonghold of la famiglia Di Vallone since Charlie the judge?

Spending money on a streetcar service that so few will benefit from seems stupidly regressive.

C'mon-- nobody really believes that in this city, if they build a new transit line, only 50 people will ever use it. Per day. Period. End of story. Developers will hi-rise the area up, and then it will be packed to the brim.

And yes, the cop-hating piece of shit mayor should be in jail.

2.5 BILLION for a glorified pub crawl?

"A pace of roughly 10.5 mph during peak hours." So if you want to go even half the length of this ridiculous 17 mile route, it will take you almost an hour? Who is falling for this as a good idea?

Maybe he wants this in place so his kids have an easier time coming to see him at Rikers?

I love the idea of alternative transportation options but why is the street car line is only being built in areas saturated with with luxury high-rise apartments & cond's You know who else needs better transportation? the residents of southern Queens & Staten Island !!

He should hold the meeting at that new catering hall in the Steinway Mansion Warehouse District.

That he is starting in Astoria (with all the communities along the route) tell us what he thinks of the voltage of the Astoria community, if you know what we mean.

You see, that Steinway Mansion voodoo doll curse Fiasco is just starting to repay the community many fold.

It cost $2.5 billion to go to the moon and lawsuits from accidents and people getting killed will cost even more. This crazy scheme can not work on ground level shairing roadbeds with traffic and pedestrians. This is NYC NOT San Fransisco or Disnyland
The mayor has taken way to many drugs and belongs in a hospital

If I could get 2.5 billion in taxpayers money to my friends I'd do it too knowing the people can't do squat shit about it.

City Hall will get raided and de Blasio will get impeached way before any street car plans get finalized. By then all the donations from real estate developers will get returned and this plan will get shelved. No need to discuss further.

But this idea was on sored by REBNY affiliates.
They are stick with real estate and no nearby transportation. If the transportation gets improved , the land and development is increased tenfold. And we know how Fer Mayor sucks up to REBNY!
Bend over Bill. That's his handle.

Is this some sick joke? $2.5 billion dollars being spent on something only ~250 people will use per day? That's money that could be put towards more busses, extending the subways, subsidizing ferry service - things regular New Yorkers actually use.

Whoever said pub crawl on wheels here, fucking nailed it.