Anti-gentrification group: too little, too late? 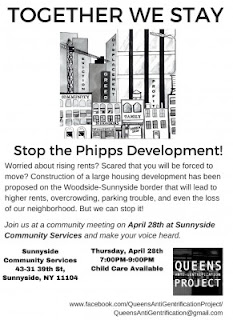 The quarter-page ad in Friday’s issue of the Woodside Herald is direct:

“Together we Stay, Stop the Phipps Development!”

The ad was placed by a new group called the Queens Anti-Gentrification Project that was formed eight months ago by a handful of Sunnyside, Woodside and Jackson Heights residents.

The group is opposed to the construction of a 10-story, 220-unit residential building proposed by Phipps Houses to go up at 50-22 Barnett Avenue (see details below). Its members will be holding a public meeting at the Sunnyside Community Services Center on Thursday to discuss ways in which to block the development.

Phipps needs to get the property rezoned in order to move ahead with the project. The company said that 100 percent of the units will be designated as “affordable.”

Dan Raymond, a co-founder of the Queens Anti-Gentrification Project, said the group is comprised of about six core members who believe that the gentrification wave is beginning to seep into Woodside, Jackson Heights and farther east.

He said his aim is to put the brakes on further gentrification in Sunnyside and the rest of Queens claiming that it is leading to higher rents, overcrowding and the loss of family-owned businesses.

He said that his group wants to make sure what has happened to residents in some parts of Brooklyn and Long Island City will not play out here.
Posted by Queens Crapper at 6:29 AM

The words of Donald Manes still echo. "Queens has NOTHING but land, and I intend to develop it"!
Do you think you can successfully win a battle against REBNY and its owned politicians?

Time to move into reality...maybe even move out of New York.
I just heard on the radio that millennials are more on debt than their predecessors.

The nagging truth is, that unless you are making about a quarter of a million dollars a year, give up any idea of living the fabled NYC high life. Kansas is looking good these days.

Gives a whole new meaning to "Woodside On The Move"!
Consider moving. Rents are skyrocketing! NYC is running out of space to build "luxury" dwellings.
Your nabe is next! REBNY has spoken. They hold all the aces!
If you look up your local council member's political campaign contributions, most likely, he or she is owned by the Real Estate Board of NYC...REBNY,
Our's, Paul Vallone is one of their chief stooges. The whole Vallone family business is centered on lobbying for developers.
Dump Don Paulo!

The Mayor will make sure the zoning variance goes thru, he needs all the developers money he can get his hands on to pay his upcoming legal bills.

i am sure our counselman Jimmy Van Bramer is all for this idea -- how much money is he getting for this?

No such thing. No revenue projection will support this being built based on future income in that case.

Get ready for the return of the POOR DOORS!

Good luck at getting this stopped. It looks like an uphill battle.

Jimmy Van Backdoor? LOL! He will bend over any day for REBNY campaign contributions.
He desires to be the first open lavender mayor of NYC.
Do us a favor, move to San Francisco. The Castro district needs a councilman.

Elephant ears Van Bramer is ready to listen to any developer as long as they leave their money on his bed stand.
Variance? His life style is a variance.

As councilman Jimmy would say, (lisping) "Isn't this the greatest?"
Variance Van Bramer. He never saw one he would not vote for.
What do you call someone who sells their services?

The tsunami of Manhattanites spilling over the East River into Queens cannot be stopped by anyone...save a real tsunami that wipes out the waterfront rendering it useless for real estate development. Better build an ark and quick!

Instead of talking what idiots these people are, how useless their efforts will be, and how its the mayor's fault, why don't we move forward?

We need to take a page from what is going on in Manhattan - yes, lets stop wasting time reading the Western Queens Gazette for news on community preservation and start to go on Manhattan community blogs to find out the possible.

And of course, a big problem everyone has is with Jimmy Van Bramer, who is quick to take the preservation religion when its his back yard in the Gardens, but MIA when it comes to working with the community.

Just ask the community in Woodside that are worried about the burned out St Paul's church and got the brush off from Jimmy for their efforts.

Funny, tho, how he finds times for secret meetings with developers.

Or secret meetings with hand-picked community reps on the Elks Club to get a dog-bone for the community and calling it a success.

Thanks to Queens Crap. With blogs like this, to paraphrase R.E.M.'s song, we have the 'End of the World as We Know it"

WE NEED 1,0O0 MORE GROUPS LIKE THIS TO PROTEST IN FRONT OF THE STEPS OF CITY HALL

come on, get real. the place to protest is where the local developers go.
in front of your local pol's face.

BS!
Protesting on the steps of city hall is a waste. Demos are scheduled by the hour there. What time slot have you booked?
Demonstrate at your local council members office for a change! Bring the battle home!

call a city agency,
dial 311,
clean up the ugly lot ourselves,
its the mayor's fault,
say we are all doomed - time to move,
write something stupid or racist or biased to keep the dear hipshits away from here.

GET A NEW PLAYBOOK CLOWNS!

I've never read so many negative comments about people taking action on behalf of their community. Really sad. I'm pretty proud that this group is trying. Good for them.

"come on, get real. the place to protest is where the local developers go.
in front of your local pol's face."

Speaking of which, where is the OCCUPY movement from a few years ago. These lots and sites would be the perfect places to set up camps, and the issue is precisely in line with their title. Especially since these developers got to build the last few years on criminal bribing for zoning rights with the aid of a corrupt city hall.

Where are these people? Was it about the poor, the discrepancy of wealth or just about their college debts?