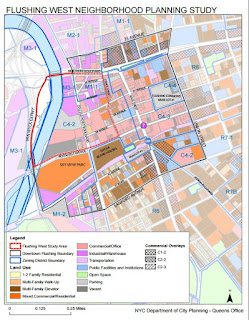 Community Board 7 brought together city agencies, developers and community members to discuss potential impacts of the rezoning and development anticipated for Flushing West at a public forum last Tuesday.

The meeting highlighted the incredible amount of coordination and planning that would need to go into development in the area, which could see about 1,000 new units in the neighborhood at 13 projected development sites. An additional 13 sites and 1,000 units are not likely to be developed before 2025.

If the planned rezoning from a industrial into a residential area passes a City Council vote several months down the line, Flushing West will be one of the first neighborhoods to see Mayor Bill de Blasio’s affordable housing plans, Mandatory Inclusionary Housing and Zoning for Quality and Affordability, implemented.

But the most existential concern was whether the development could even happen in the first place.

Developers from F&T Group and Triple Star said their banks told them their projected profit margins were not large enough for them to approve loans.

MIH does not have any inbuilt subsidies for developers. In many neighborhoods, however, developers may be able to negotiate for additional height or other concessions to help them finance the affordable housing, if need be. But because of Flushing Wests’ proximity to LaGuardia airport, building up is not an option, and due to the high water table, neither is building down. CB 7 Chairman of the Land Use Committee Joseph Sweeney said that he was worried about how that would impact developer’s desire and ability to build.

The 421-a tax breaks for affordable housing are also no longer in effect, something that could further hurt developers’ bottom line all around the city.

And none of this matters, so long as Claire Shulman's group got grant money to study the area. Ain't life grand?
Posted by Queens Crapper at 7:44 AM

And they're finally did evaluations on the surrounding water areas. Some of the mopes might finally have all their brain cells functioning.

So the Chinese will not appear to have a west extension of their downtown colony.
Maybe mainland China will but it. They already own scads of property within the USA. Parking their money in real estate seems to be their MO.

"Developers from F&T Group and Triple Star said their banks told them their projected profit margins were not large enough for them to approve loans."

Ah so these fuckers are behind all evil apparently. Profit margins.That's it.
Not large enough means no 2000% return.
Fuck them.
Federal investigation now into these "projected profit margins" that turn real neighborhoods into living hell for real people.
Go after immigration too. Lets see how the fuck these people get in here and break all laws known to mankind.

What about what works for the COMMUNITY? More development is the last thing that area needs.

I was thinking Apelian stepping down would be a good thing, until I saw the Sweeney comment.

We need community board reform NOW.

No one in CB7's population of 250,000 residents want this. Not even the Chinese. No one wants this except developers and their handpicked servants at CB7.

If they don't want a dustbowl, restore the creek and build a park like Schulman suggested years ago.

Who would want to live there with the stink and the Jet noise from LGA ? "All day, every minute. The noise is annoying and disrupts sleep, blood pressure; it creates anxiety in children, adults and the elderly, it disturbs school children's ability to concentrate and absorb homework; the invisible fumes are insidious; these kind of kerosene contaminants are implicated in autism spectrum disorders and complications in pregnancy."
NYC Resident against Next/Gen

LOL. you guys are funny.

Previous commenter.. who want's to live there? Dude, you have no clue and living in a cave. When skyview parc was build, people thought the same thing as you did. Couple years back when it first finish, a 2 bedroom condo with 1k maintenance fee but with all cool hotel like amenties goes for 640k. Many people including my asian friends thinks it's expensive and no one will buy it. Now? it's worth 1.1 million and a long wait list because people bought them! Look at the stores there now. It's brand name store. Look at the number of people there.. it's not different than the density of manhattan stores and it's not just asians only. But again most posters here doesn't do first hand research but just comment racist crap.

To number 3 poster. It's not an extension of chinese colony. Look at wsj.
http // www . wsj . com / articles / just-on-the-fringe-1460758036
People from sweden came here and at first they thought it was a big chinatown. Then they realize it's very internationalize. That's the trend they are going with regardless if they are chinese developers or not.

I go there everyday to ride the 7 train to manhattan for years and saw the change around it. The new building fulton square doesn't look ghettoish like that flushing mall which is now torned down. As I expected and predicted over 10 years ago here when there was no skyview parc or the likes, this flushing area will blossom to be somewhat like midtown. I mentioned that here, but here people laugh. But now, just check out how wsj article. Who's laughing now. Oh and right now it's still a bit early as it's nothing like midtown manhattan but again I can assure you in another 10 years, you will be embarrassed by your laughter. Like I say, I have inside connections 10 years ago and still do now.

People here sound so uneducated and uninformed to what's REALLY going on. Such bigots...but again, it's Queens and Queens are usually full of crap people. No one wonder why this site is call queenscrap. hahah come on, let the onslaught of comments against me begin. I don't care because I know I'm right just like 10 years ago.

To the commenter and the politicians, you guys are both wrong. There wont be 10000 people and there wont even be 1000 people! The 1000 units of housing will be mostly bought up by investors and barelt 25% of it will actually get rented. The affordable apartments will be that 25%. There are no transportation problems or overcrowding or infrastructure problems because no one will be living there. SkyView is 100% occupied but at best only 50 units have actual people in them. Most crowding there is from the mall. There arent any residents! So the politicians should clean up that barren industrial craphole and put nice new buildings. To be fair F&T makes nice buildings and they do no design them. For example the Hyatt has to be done to spec exactlt how the Hyatt Hotel corporation wants it. Anything F&T wants to build will be clean and nicely made. Theor investors likely expect at least 10% returns and currently they wont get that profit so its simply not worth it. Make no mistake the people of Flushing do want nice new professionally built buildings. It brings up the neighborhood from the low class area it is.