Do you trust this man with our schools? 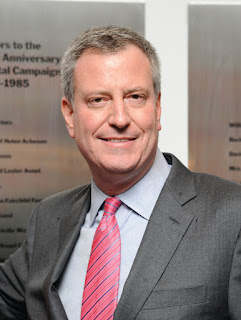 With Albany just weeks away from deciding on extending Mayor de Blasio’s control of the public schools, voters in the city are split on the issue, according to a poll released Monday.

The Quinnipiac University survey found 46 percent of voters in the five boroughs favored an extension, while 43 percent didn’t.
Opposition was far higher outside the city.

“Since this issue is decided by the state Legislature, not the New York City Council, Mayor de Blasio will have to press his case in Albany.”

The state Senate plans hearings on the issue next month.
Posted by Queens Crapper at 6:48 AM

This guy smoked too much pot in his younger days. Plus he is on anti depressant drugs? He can't think straight. Keep him away from my kid's education!

I feel bad for families that have no choice but to send their kids to a NYC public school.

I don't trust this incompetent fool to do anything but cause a derailment. He is a train wreck!

Why wouldn't you want him in charge? I'm personally looking forward to his next big idea of integrating juvenile delinquents into the few areas in NYC with good schools once the jails close.

I wouldn't trust him with the milk money.

He can put the kids into uniforms...they'll be Red, fer sure.

His credo to the hyper-corrupt, vile, vacuous (and vastly overpaid), city council: "Don't Blow My Scam---And, I Won't Blow Yours!" Lunch and a manicure is now a stressful day at City Hall---and it's even worse, up in Albany---where Andrew Cuomo's 'Patronage Fantasy Camp for Cronies' holds court (and our citizenry continues to be held in 'hijack-and-hostage' mode)---as New York residents' taxes climb (along with taxation without representation), as full blown anarchy prevails (currently in mid-level progress)!

RIP New York---it was nice to have known you!

The most incompetent mayor NYC has ever had. Makes David Dinkins look amazing!

If the Dependent Class could vote on it he would win.

How the hell did a communist socialist make a billion dollars

But someone still has to beat him.

He may get a second term because no one else looks better.

How sad is that!

This man does not care for our New York City schools. He sends his kids to out-of-state colleges.

He's supposed to be a Robin Hood for the people

I'm wondering how is going to explain $ 72 million to the people ?

I don't like DiBlasio, but I support Mayoral control of schools in general. We shouldn't give up what we fought for now that we have it, or we'll have to fight for it all over again once we get rid of this clown.

He's not a communist nor a socialist, he's just INCOMPETENT!!

Big goofball who won't ever get any vote from me any more, he's way too stupid. he hasn't changed anything from the Bloomberg days. The DOE is just as inhumane to kids and educators alike as it was under little Napoleon. As a matter of fact, DeB made it worse by allowing the kiddies to use their cell phones without restrictions. Real smart! He still has an army of lawyers ready to persecute/prosecute teachers. Still wasting probably millions on consultants/Aussies/Brits and whatever other useless evaluations went on with Bloomberg. The DOE is nothing more than a contract mill, which it was under Bloomberg. As a matter of fact, when my hubby retires we're moving just a couple of miles east of here so we can be in Nassau County, with better amenities and libraries. So fed up with everyone except Tony Avella!

What I wanna know is how can this mentally ill person taking all sorts of drugs be allowed to stay in office and make decisions ?
Doesn't NY have any kind of laws regarding these issue's ?
Cops say he reeks really bad of marijuana at times, so much so many request being re-assigned from his security detail.

A mayor is allowed to work and make decisions stoned ? WTF is going on here I never heard of such a thing in New York ?

He will 'fix' the schools by throwing more of our money at them. Gotta keep the teachers union happy

I do not trust a single elected official in this city.

Just got another email from the boss Crowley asking me to donate the equivalent to my annual salary to one of his damn fund raisers in Manhattan. Thank you Walter Swet who ever the F*k you are for asking.

News flash.... He's been running the school system since January 1, 2014. If you have a specific criticism of that time, say so.

NO! He is an incompetent jerk. Still maintains Bloombutt's cadres of gotcha lawyers ready to harass and pounce on innocent teachers based on the stories of students looking for some get-back for a bad grade they actually deserved.

Retrieved an incompetent woman out of mothballs to appoint as chancellor. Remember that terrible blizzard? She said of it, "It's a beautiful day!" Right. Teachers had to risk life and limb to get to schools where only 25% of the students showed up. And what about this recent blizzard, 4th worst in NYC history? Big Slow kept the schools OPEN again. He is also in love with Commie Core, which is pure garbage.

Gave permission for students to have cell phones in schools. Now in order to conduct a lesson, teachers first have to pry the cell phone off the face of the students. They are so addicted to these things that they are constantly texting when they should be listening and taking notes, some having the gall to make phone calls right in the classroom. They use the phones to take unauthorized pictures of teachers and others, to record teachers and others, to send pictures of their tests to other students in the room, and get up to every other kind of anti-academic trouble. Worst judgment call ever, to allow phones in schools.

Just the fact that he lifted the ban on smartphone (just writing and saying that oxymoron makes my skin crawl) makes the mayoral control rule untenable. These kids today in the worst most self-centered coddled generation do nothing but text to gossip, bully and most likely cheat since google can define anything with one click. And then there is the worst and most abusive billion dollar invested creation known to technology snapchat, where you can text and take unflattering and embarrassing videos and pictures of people and kids you don't like and send out to other scumbags before deleting it forever without a trace. It's like if the CIA had a covert bullying unit.

That picture alone of DeFaustio with that slackjawed grin on his face is enough to bring back control to the board of ed. Which, even though it means more government bureaucratic bullshit and red tape, comparably would not be a bad thing. It will give more responsibility to next chancellor and leave the next mayor with other essential things to deal with.

As I write this, several students are caught carrying guns to school, and the Chancellor still insists on removing all metal detectors. Worse, there is no replacement system (no wands, searches, etc) which puts the students, teachers, and security guards in danger. de Blasio supports this idea while telling students to opt out of the state tests. What happens if he's confronted with a school problem? He blames it on the previous Mayor even though Bloomberg left office 28 months ago. Parents have to be high on drugs to trust him controlling our schools.

Public school control should not go to a person that's confused all day long. Weed and anti-depressants don't mix.

"You may not have voted for him or voted at all but this much is true
You elected him so you deserve to wallow in his dung."

In case you haven't heard, we the people do not get to decide who is running for mayor. The DEMOCRATIC MACHINE does it for us. Isn't that nice?

In case you haven't heard it, it takes lots of greenbacks to promote a candidate for any office in this city, state and country. We the people, do not have the money to fully support a candidate of OUR choosing so we have no choice but to accept whatever trash the DNC decides to promote.

In the last mayoral election we were ALLOWED to chose between "bad" and "worse". And the "worse" candidate we hardly knew was running because he didn't have the thousands of greenbacks necessary for publicity ads that the "bad" candidate was supplied with.

In case you haven't heard, it's been this way since Tammany Hall.

And the DNC said: "Tammany Hall isn't all that bad. Let's bring it back."

Who cares if the mayor smokes up? If he was a good mayor, you wouldn't give a crap, and if he was totally sober you wouldn't like his decisions and policies any better.

You sound like a bunch of old fogies harping on that.