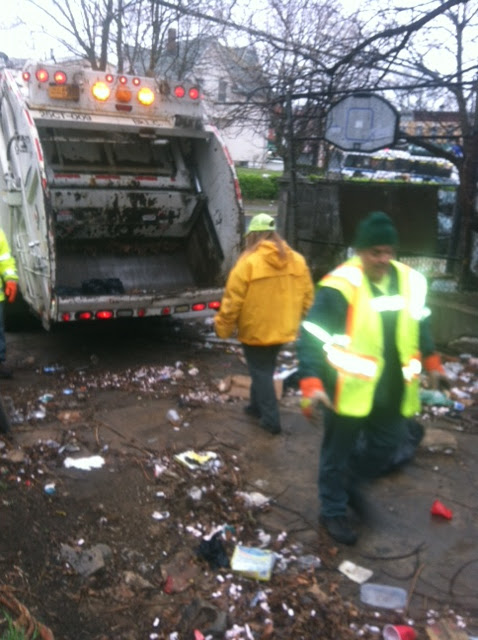 Employees began placing the garbage into the truck. I asked one employee, Mr. S. about finding a solution to this constant problem. He said, "they should put a gate, a fence, something, but I do not make the rules." He went on to say that yesterday they began cleaning, but there was an interruption; there were an abundance of syringes. He said that according to policy some one had to do an analysis. That is the reason they returned today to complete the job. 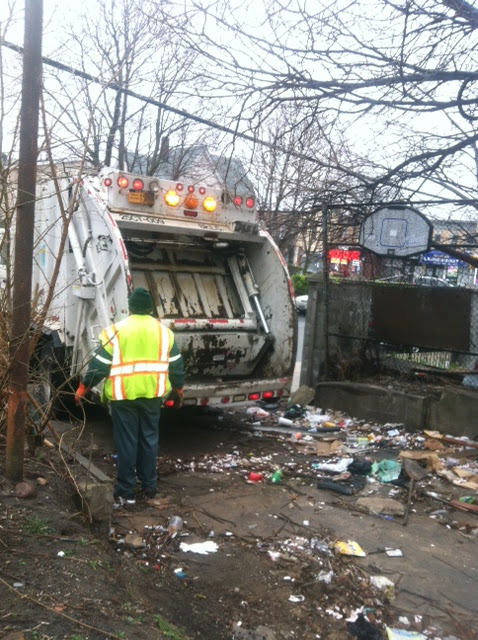 Some employees continued to pile garbage into the truck. Another employee was in the process of removing a filthy mattress that was leaning against Fobb's house; when suddenly a young man emerged from behind the mattress; another interruption.The man appeared startled. I asked him why he was behind the mattress. He replied, "I was taking a piss". 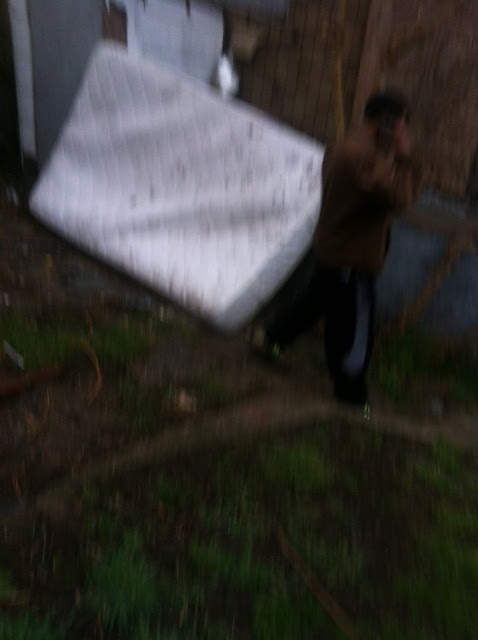 However, a near-by resident/supporter said, "He is lying, he always sleeps behind that mattress. He was there last night." 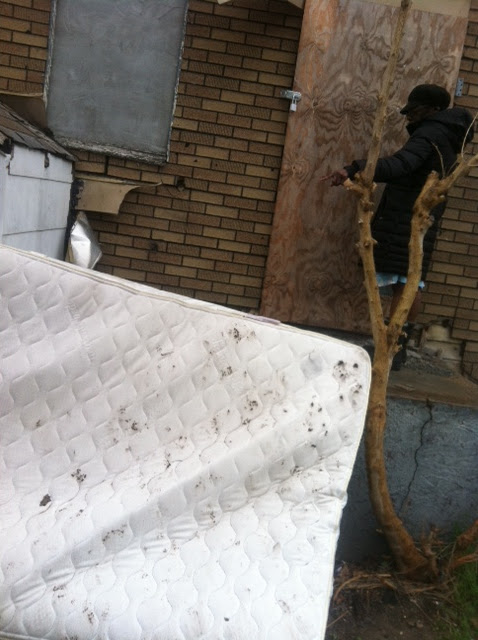 A supporter pointing to the pisser's quarters.

A D.O.S supervisor arrived at the seen to assess the situation, but the pisser or sleeper had long gone. So the job was completed. 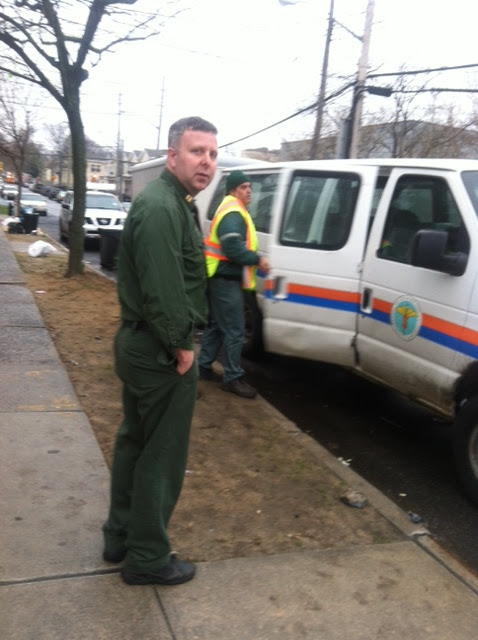 I initiated a conversation with another employee; who said "the powers should come up with a solution."

Some residents said that they are fed-up of the fiasco. They believe that the garage was deliberately left filthy to embarrass the black community. One echoed, why they did not clean this disaster before Easter.

After, listening to angry residents and understandably so; I left the scene to prepare to go to work.

Boranian, these episodes have gone on for too long. Fobb could be dead, who knows. The last we heard, he was in a facility. That information came from your former colleague, Mr. Lamura; he retired about two years ago.

Boranian, please fine a way to install a fence, and bring this issue to a close. If there are legal deterrents, then please provide funds to CleanupJamaica. We do not care about being legally correct."


P.Hazel: Social Media Journalist for Justice.
Posted by Queens Crapper at 7:02 AM

It's just going to be a mess again. Only a matter of time. Shit people create shit places. The garbage doesn't get there by itself.

Yeah, sure shit people create shit places BUT that is only if the powers that be allow that to happen and do not do anything within their power to actually do something. If they can't then there is no reason to have elected officials, especially at the City Council level where something like this falls under.

They know this property has been vacant for years, they know it has been an illegal garbage dumping site. Either put up cameras and/or seal the property off with a fence. Neither cost that much money. Better yet, de Blasio is always talking about housing, well here is one, one of many like this.

Big waste of time and taxpayer money that should have been spent cleaning up something worth it like Forest park.
It will revert to filth because that's how those people in Jamaica like living. And the mayor keeps inviting more. Do these people even pay taxes or are they mostly Sec 8 freeloaders ?

I am not a sanitation worker or even an outdoorsman, but usually when you move something of certain size a small rodent, raccoon or rattlesnake might pop out. But a live human being? Despite being Jamaica and forced gentrification pushing all the derelicts from trendy and now tourist spots to the dirty southeast leper colony of the world's borough, this is just fucking surreal.

Lucky for us the Walking Dead and 28 days later are fictional because that would certainly have been a brain eating zombie and would have started a outbreak. Although if one walks along archer and the van wyck it's kinda hard to tell the difference.

Excellent TWD reference. We need to implement Giuliani era policies once again and rule with an iron fist to get this city back into shape.