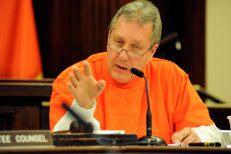 New York City Councilmember Daniel Dromm (D-Jackson Heights) was a co-sponsor of $300,000 in discretionary funding awarded to a sensitivity training program that was supported by Jona Rechnitz, one of two men reportedly the subject of a Federal corruption investigation tied to both the New York Police Department and the de Blasio administration.

Mr. Rechnitz’s support for the training program was revealed in a report published by The New York Post. Councilmember Dromm’s co-sponsoring of the funding was identified in the City Council’s Fiscal Year 2015 Schedule C, which details the awarding of discretionary funding.

According to the report in The New York Post, Mr. Rechnitz was introduced to municipal legislators during tours of the Museum of Tolerance New York, where the sensitivity training was reportedly held. The individual, who orchestrated the tours and introductions, was the lobbyist Michael Cohen.

It is not known if Councilmember Dromm took one of those tours or if he met with Mr. Rechnitz or Mr. Cohen.

Councilmember Dromm’s office did not answer several advance questions submitted to him via e-mail by Progress Queens, and a message left with his communications director, Michael Mallon, was not returned.
Posted by Queens Crapper at 6:51 AM

Recall how Dromm was so outspoken say, 5 years ago? His in your face attitude about LGBT and illegal immigrant issues was obnoxious. He's been very low key and quiet these last few years. What happened?

Orange is the new black, baby!

He's been very low key and quiet these last few years. What happened?

Actually, he's one of the ones that can run for a third term.

Sounds like a South Park episode come to life.

Why/how is he allowed a 3rd term?

So you take the money you get from the Discretionary Funding award to fund your bribing and political contribution activities. Fuckin' Brilliant!

"Why/how is he allowed a 3rd term?"...When Bloomberg weaseled his 3rd term part of the deal was the City Council mutts that voted for it would get grandfathered in to do the same.

Sounds like a South Park episode come to life.

And thank the Invisible Man That Lives In The Clouds (or for them the Big Red Goat Man That Lives In The Earth's Core) that collective of rogue greedy liberals voted themselves a raise commensurate and above the average middle class and working poor salary will no longer will be tempted to have their scaly palms greased by shady developers who share their fake concerns for humanity and equality.

Yet again, Louis Flores does better for free what many career journalists do for a living.

Dump this aging queen of Queens!
His only real interest is in promoting gay rights. Admirable in itself, but the rest of Queens is straight. What about representing their rights too Mr. Dromm?