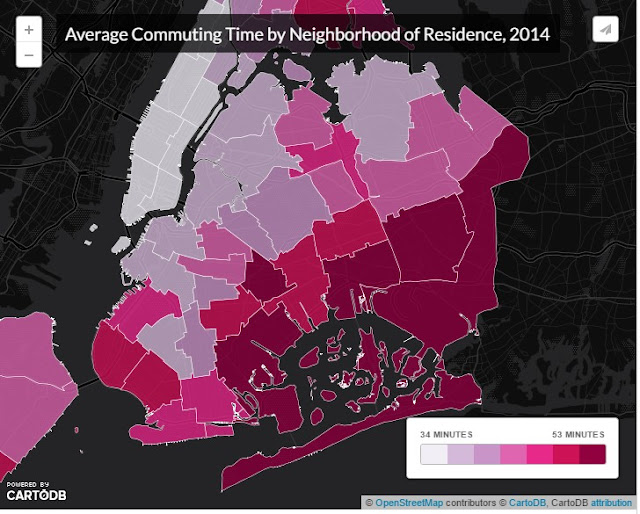 Residents of Jamaica and the Rockaways who commute to work have longer average traveling times than the residents of any neighborhood in the five boroughs, according to a new report from the Center for an Urban Future.

The report, which was released March 31, found that the average commute to work from the Rockaways was 53 minutes, with Jamaica a close second at 51 minutes. These commutes far exceed the national average commute of 26 minutes, the report said.

“Average commutes range from 53 minutes in the Rockaways to 26 minutes in the Financial District and Greenwich Village,” the report stated. “In other words, over the course of a five-day work week, Rockaway residents will spend four hours and 29 minutes more time commuting than those who live in Downtown Manhattan.”

Workers commuting from Bellerose/Rosedale have the third-longest average commute of Queens residents at 47 minutes.

I'm so glad I no longer work in Manhattan. I spent 90 minutes-120 minutes commuting from bayside into the upper east side and that's just one way. When it was snowing, it was an easy 2 hour to 2 1/2 hour commute. The 6 train sucked, the 7 train was always delayed because of doors being held opened all the time, the n,q,r trains were good in the morning but in the afternoon, they were terrible running! The q12,q13 were always so crowded. On the q12 bus, people would press the stop button on the first damn stop when all they had to do was walk to the first stop! It was just really really bad, not to mention all the rude people on the 7 train and on the buses! Multiple times I had to tell the little chinese women to go to the back of the line because they would always try to cut you. I'm so happy I don't have to do that anymore!

There are a bunch of the uninformed posting that these people should move closer to Manhattan and that it's common sense that the further away you live, the longer your commute will take. But these folks are assuming that everyone can afford to live closer to where they work, that the bus and train service is fantastic and not subject to lengthy delays on an almost daily basis, that MTA service hasn't been cut to these communities and that they all work in Manhattan. It's only a 28 minute ride to Penn Station from Bayside on the LIRR. 32 minutes from Rosedale. So this would indicate that there are other factors in play.

I appreciate the fact that most people can't pull up roots and move just to be closer to work.

At the same time I don't think we need to fund a study that shows if you live further away from where you work it takes longer for you to get to work.

Thank you Captain Obvious! Those tax dollars could have been better spent elsewhere.

Likely a government grant as well.

Who would pay to run this study?

Sure if you had a direct express rail link anywhere within proximity of Manhattan, anyone could get to work in no time. Unfortunately, certain area ps do not have that option and the roadways for buses are clogged.

No Shit !! Tell us something we don't already know. The city only funds transportation projects in Manhattan and forgets about the other boro's. Fuck Them !!

What are they talking about its been that way forever before Moses and that airport. When you live out in the sticks or marshland for cheaper property that's the way it is. And 2: note that's why most them homes have driveways for cars

Likely a government grant as well."

Keep going. Your ignorance is entertaining.

Crappy, even on the most optimal of days, with the most perfect public transportation system in place, these locations that have long commutes into Manhattan are still going to have long commutes into Manhattan. Another solution is - don't live where there's crappy infrastructure. I considered moving to the Rockaways (Rockaway Park, Roxbury) from Astoria in the late 90's, early 2000's, but my commute would have been brutal, whether by train, bus, or car. I moved to northeastern Queens instead.

And the people living in those locations can't afford to live in northeast Queens. So let them suffer?

For me: 1-way MTA-legs only = 50 minutes reliably, daily from Maspeth to Midtown. Just sharing. Maspeth is about 4 miles as the crow flies, maybe less. Where's my grant?

"I moved to northeastern Queens instead."

Do tell about your wonderful commuting options from northeast Queens.
We claim to be a world class city, but where is the world class infrastructure?
Upgrading means WiFi for stupid peoples' smartphones?
Roads are bad, commuting is a nightmare.
I dread Mondays, today only took 1hr from Jamaica to Roosevelt Av, because of an earlier incident trains are running at slower speeds.
Same bullshit every Monday.
Seems incidents occur every Monday morning on this line.
Like finishing up Fastrack repairs.
Now for the big question where is all the money going?
I mean taxes, fares, tolls, state and federal support for transportation ?

Does anyone really think the city will ever build a direct rail from the Rockaways. There is a subway, too bad if it takes 75 minutes to get to mid town. Set your alarm clock a little early. It's the same if you live in Westchester. Take an early train to get to work on time!

More people=longer commute. NYC Planning has been asleep at the switch for the past 30 years. Time to stop the 'build it, they will come' mentality that got us into this mess. According to the NYC website "Over 3 million of New York City’s residents are foreign-born; over one-quarter arrived in 2000 or later." The population of NYC has grow over 4.6% just since 2010. The traffic (road+rail) was not planned for and congestion results. Don't expect any shorter commutes any time in the future.The only way to have shorter commuting times is to lower the number of people commuting.Once again, NY IS FULL. Time for that No Vacancy sign to light up.

Those people have problems because Robert Moses only gave a shit about his Worlds Fair infrastructure and pissed on the wrong side of Queens.
As the wise old Jews up in the Bronx used to say
Grover Cleveland should have shipped his whole egomaniac real estate speculating family back to New Haven or Ashkenaz in 1880
This is what happens when you put megamanipulative ego-maniac criminals like Obama in charge

Transportation improvements will spur economic development !
The longer people commute and or are stuck in traffic hurts the economy and the environment.

Horsedicks. From central queens to my job in mid-town is 1:10 door to door.

Get on your bicycle, it will only get worse...

All the times are bunch of bull. I live next to Rosedale in Laurelton and to get to mid-Manhattan takes at least 1 1/2 on a good day. If trains or the bus has a issue then it can take up too 2 1/2+ hours. Yeah there is LIRR but most people can't afford over $20 a day. We need more express bus service this way. Most people will take that into Manhattan instead of dealing with the homeless people at the train station and the people begging for money.

Live in the boonies and work in Manhattan and you will pay the traveling time price. Duh?

When you look for a job, you have to consider how you will get to it. That HAS to be a consideration. If you don't think of that, too bad.

From Rosedale. I know people who commute from Pennsylvania and they make it 2hrs every day!
What is wrong with this picture?