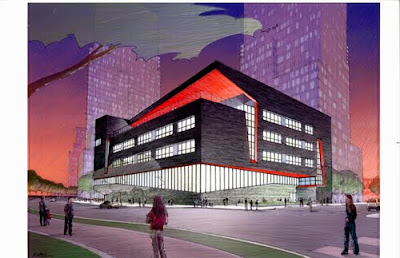 The school building itself drew some commentary and inquiry. Robert Wilkanowski, an architect and Community Board 2 member, said the colored illustration seemed to be a night scene but argued that the school’s dark walls would look industrially dismal even by day. Another man was more impressed, admiring the deck and the building’s size, but then expressed concerns that school expansion would lead to add-on floors that would ruin the building’s fine lines. He was assured that the original building would remain that way. The uses and the surface of the 4,000- square-foot deck were argued, leaving the impression that there is much more to be discussed about it.

Some attendees brought up hazardous situations that should be considered. Why, one asked, was a school site selected so close to railroad tracks? If the school is to be built in such proximity to the terminus of the Long Island Rail Road, it is imperative that students be thoroughly blocked from any access to the tracks, he insisted. He was told that kids get through holes in the fences next to the tracks anyway, which couldn’t have made the situation seem any better to him. Hearing that below-grade parking facilities are verboten in Hunters Point South because of the high water table, another man was concerned about possible seepage of pollutants into the school building and was assured his anxiety was groundless. One person asked if metal detectors would be set up at the entrances during construction and got the cheerless reply from Persheff that they would be installed “only after an incident”. A woman worried about sexual predators being lured not only by the prospect of a middle and high school but also a new K-8 school on 46th Avenue. Her concern moved her to ask if that 30-story tower beside the five-story school would be attached to it. She was told that persons on a sexual predators list would be checked should they try to establish residence in HPS or the other area residences.

At least the bullshit answers are consistent from community to community.

Photo from LIQCity
Posted by Queens Crapper at 12:47 AM

I'm I the only person who thinks its really stupid to stop building schools because it might "attract sexual predators"? I mean seriously? We need schools. There are children around anyway. What should we bus all the kids really far away onto remote islands lest someone looks at them the wrong way? I heard North Brother Island is still empty....

I think the question was kind of dumb. For every sexual predator that is on the list, there are probably 10 that aren't and are living right near you.

However, not having metal detectors is a mistake and stupid to not include before opening.