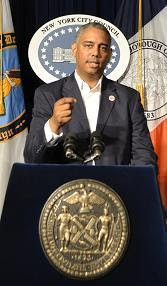 During his stay in prison at Rikers Island over the summer on the grand larceny charges, Wills claimed to have been mistreated and denied medical care for a chronic condition due to a botched surgery from a year and a half ago, according to his lawyer, Natraj Bhushan.

Bhushan said that for days Wills did not receive proper treatment, because the staff did not have his medical records on file to meet his medical needs. His lawyer also says that Wills was not in the proper unit for someone with a chronic condition.

“You’d notice that during his trial [for grand larceny], the judge allowed him to sit on a special cushion, because due to a botched surgery the lower half of his body is permanently, partially disabled,” Bhushan said. “He had atrophy and nerve damage, and it really affected his ability to tend to his constituents for a year and a half.”

According to Bhushan, the pain medicine that Wills is on has side effects, which could affect his psyche, and during his stay at Rikers he did not get placed in a unit where he could have psychological treatment that was ordered in a court directive.

“This is someone who had well-documented medical issues,” Bhushan said. “This was taken into account when they were sentencing him.”

He is suing the city for $10 million because of how he was treated and he hopes his claim, which was acknowledged by the comptroller, would force changes at Rikers.
Posted by Queens Crapper at 6:31 AM

What a FUCKING WHINNY BITCH!!!!!

This guy is a complete and total ASSHOLE.

FUCK YOU WILLS, you are a SE QUEENS GHETTO BITCH.

Well, this is just great ain't it. This bastard plundered tax payer dollars to get the justice he deserved and now he's set to win them in a lawsuit because of city and state's continued neglect, incompetence and corruption culture at Rikers.

“He had atrophy and nerve damage, and it really affected his ability to tend to his constituents for a year and a half.”

But he had no trouble cashing those paychecks for a year and a half, right? Maybe he should have stepped down because he wasn't able to fulfill the duties for which he was elected.

Wills was, "...denied medical care for a chronic condition due to a botched surgery from a year and a half ago,...

Wanna bet that he is also suing the hospital, surgeons, anesthesiologist, nurses, etc. over his supposed "botched surgery"?

When do his ex-constituents get to sue him over his "botched" time as an elected official?

You can't please everyone all the time !!

He has ass problems? He got nailed in the keester too much and just won't admit it to his homies.

How come no one gets to physically suffer anymore in the hoosegow?

The entire City Council needs to be sued by We, the People, for flagrant abuses of power that were never in their purview to exploit in the first place - including a 38% raise for which there was ZERO public referendum - but, ironically these OPENLY PRACTICING, predatory, voracious and rapacious criminals insist on YET ANOTHER round of public referendum to repeal city council term limits, when we've already had THREE FUCKING referendums in 1993, 1996 and 2010 that has affirmed our position on term limits.

Are they just STUPID or DEAF (or tone deaf)? And, just look at all of the time and money wasted that could have been spent on constituent services and doing what We, the People expect, insist upon and demand that they finally get to work (on ANYTHING other than themselves and their taxpayer-funded retirement packages), but have never seen even a half day of marginal results from this part-time job with a double, full-time paycheck that now DEVALUES honesty itself!

Frankly, I am so completely sick to death at these vastly overpaid, do nothing, know nothing hacks that I am willing all of their collective appendices to BURST - the only way to rid such a toxic scourge of corrupt misfits, all of whom know only how to continually rob, cheat and steal from their ever languishing constituents like me, where THEY are lavished upon with a defined pension system that was always designated for THEIR CONSTITUENCY!

It's time to make public corruption a capital offense for these 'ALL PAY and NO WORK' sycophants of errant, political worthlessness! Men have been hanged for LESS!

It's a miracle that HE isn't an inmate himself!