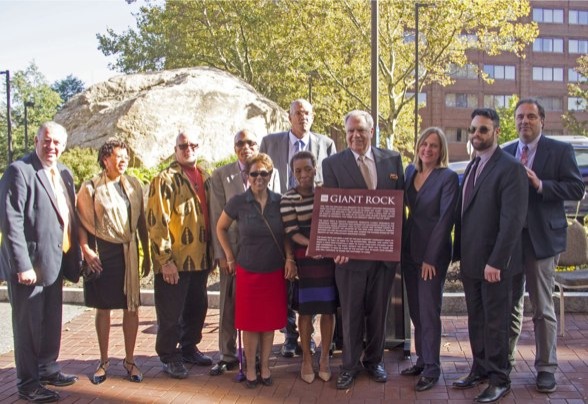 Generations of children in East Elmhurst and Corona grew up with a giant boulder as an important part their lives. It’s where they played and fought and had tea parties and picnics. The youngsters used to bury their pets around it because they loved the Giant Rock and in later years they grew concerned for its future in the middle of the rapid development in and around LaGuardia Airport.

In 1980, a Crowne Plaza Hotel was to be built on the site and adults who were once the children who climbed on the boulder rallied around it fearing developers would destroy the big rock with explosives. Attempts were ineffective and the rock still bears scars of the attempted demolition.

Nearly 20 years later they returned to rally around the rock that was threatened by the construction of the Hampton Inn.

The 1,000-ton boulder, left behind by the glacier that created Long Island 12,000 years ago, became a centerpiece of the parking lot of the two hotels but it had a plaque calling it The Ditmars Boulevard Crowne Plaza Pet Rock after employees at the two hotels had a competition to name it.

Nearly half a year ago, the group addressed a letter to both hotels requesting the name be changed back to Giant Rock.

“We didn’t hear back so we put up a petition online,” Drew said. “But before we could tell them about it we got a letter from them saying they wanted to rededicate it.”

My Parents moved from Harlem to Corona and it was a very big deal in 1927,” Callendar said. “When you got out of Harlem this was like the country and this is where we all played together, whether you were from Corona or East Elmhurst.”
Posted by Queens Crapper at 7:55 AM

Really! This was a source of contention?!

With Barbarians at the gate, the economy shaky, and a less than terrific president in office, an asian dwarf threatening to nuke the U.S.

THIS is what they argue about?

So ghetto. They grew up with only a rock to play with.

So sad. This is what occupies someone's time today.

So pathetic. The Times Ledger covers it.

I want a plaque on my toilet for all of the satisfaction after taking a big dump. Can they send a reporter right over?

Although I agree with the comments already posted, I would just like to add the following: I was born in 1948, and lived in East Elmhurst as a child. East Elmhurst, in the 1950's, was an integrated neighborhood long before integration became "fashionable".

My parents were lower income middle class: my dad worked in a factory, and my mom was a "homemaker". The kids I played with were Black, White, Hispanic, and we didn't care about race, color, religion etc.

We didn't have all the fancy electronic shit kids today grow up with; we shared bats, balls, bikes and skates because that was all we had.

The big rock was our meeting place; we played "King Of The Hill" on it; we held our secret clubs meetings there, and sometimes, it was a place of refuge for kids wth alcoholic or abusive parents.

Sure, it's just a big rock, and there are far more important things for us to worry about in today's world, but for those of us of a "certain age", this rock is memories of a time when things were so much better....

"Attempts were ineffective and the rock still bears scars of the attempted demolition."

Hmm, you could've left the excerpt at that, Crappy. Not all local hoo-ha is worth covering, even if it comes from a local paper (sometimes *especially* if it comes from a local paper)...some of the nothing "stories" they put out are just that: _stories_, and platforming fluff like this gives the impression our borough is full of whiny, anxiety-ridden old-timers with nothing better to do. LOL...

..that said, it's nice to read something that isn't completely sky-is-falling, world-is-ending, negative all the time. Thanks Crappy.

Friday before the election, and this is what you give us, but there's some urgent stuff that couldn't wait and you've give the big rock space instead...sigh

There's a giant boulder at the foot of a tree at the intersection of 26th avenue and Utopia parkway that was left by a construction crew approx. 4 years ago - WHEN IS THE CITY GOING TO REMOVE THIS EYESORE !!!!

@Anon hahah...think about it, we're all on a big rock in space anyway. It deserves some space! :V

"i got a rock"
-Charlie Brown

Wow, when I started reading the article I didn't expect it to have a happy ending.

Don't know what other commentators are complaining about. Not everything has to be bad news or elections.

No More DNAInfo or Gothamist. What a fucking shame !!

I really enjoyed them.

It's a shame that some of your readers not only have small brains, they also have small hearts.

Efreeti. That monkey gif is annoying.

Finally some good news in Queens for a change

This is a cool story and inspiring since the rock was able to withstand the hammer of crass over-development and city planning. It's an actual living symbol of resilience and resistance.

Being a resident of Queens and a commuter all over it, I never seen it. It is an genuine tourist attraction that I will check out soon enough. Good thing the weather is ludicrously warm this autumn.

I saw the rock all my childhood as we drove from Jackson Heights to Flushing and then as it seemed to survive all the hotel construction. It has meaning for people nearby and saving it is a small positive note in the community. Why all the negative response? Is there a finite amount of room on this site? Did it use too much electronic space?

I honestly thought it was a nice story and a break from non-stop crap.

A big rock. LOL! What a tourist attraction to promote.