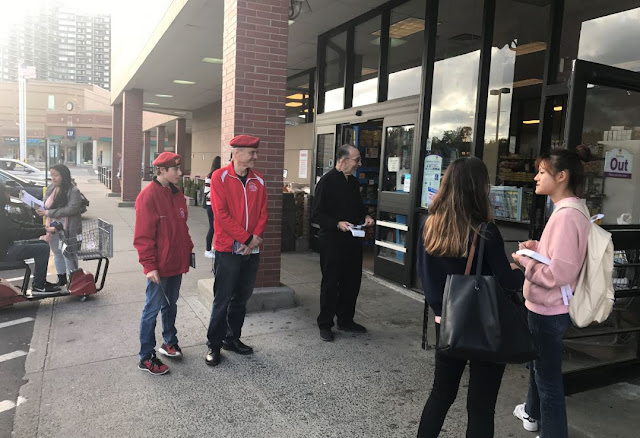 Saturday I showed up with a group of volunteers working for Paul Graziano’s city council candidacy. In the recent Democratic primary he lost to the Vallone machine by a small margin. He’s got a real shot to win the General Election Nov 7th. But the tactics of Paul Vallone are thuggish as exemplified Saturday. Vallone and his campaign crew posted up outside of a Stop and Shop supermarket in the Bay Terrace Plaza which is in Bayside. They were first there so when we arrived we respectfully worked the back of the exit line from the supermarket. 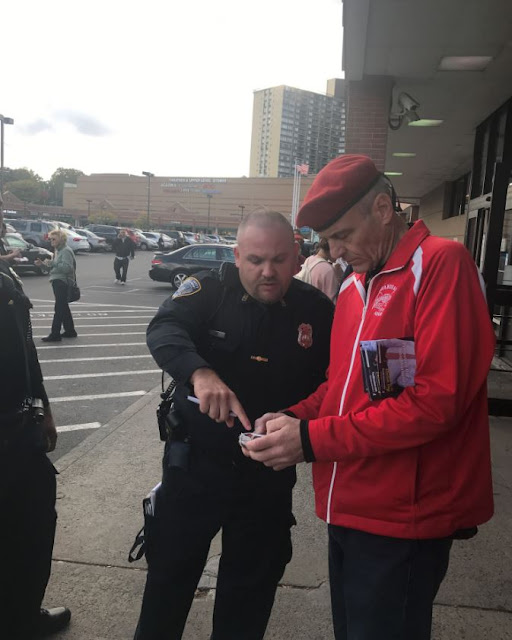 Everything was going fine until Paul Vallone himself noticed that many of the shoppers were calling me over and having long conversations with me. He decided that he had had enough of freedom of speech and fair competition. He called the mall police on us who then instructed us that we were standing on private property and were without a permit which Paul Vallone had. I requested to see the permit but I was denied. 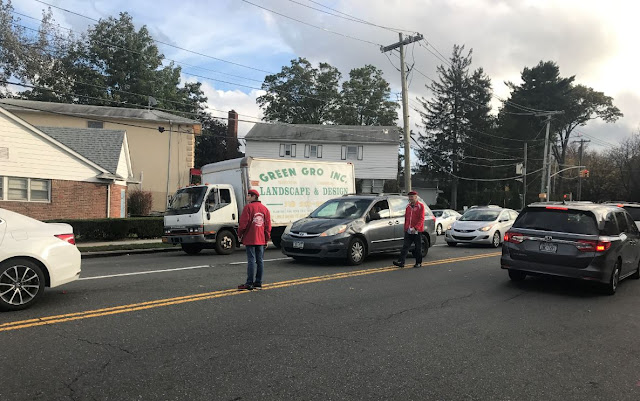 Rather than create a big scene since I was well aware that management was a Vallone crony we did the next best thing and marched outside onto the entering street and started to stop cars, talk with passengers and give out Paul Graziano literature. Thankfully the NYPD did not hassle us. Paul Graziano’s crew was working hard and rolled with the many changes that I had to make from our original plan. 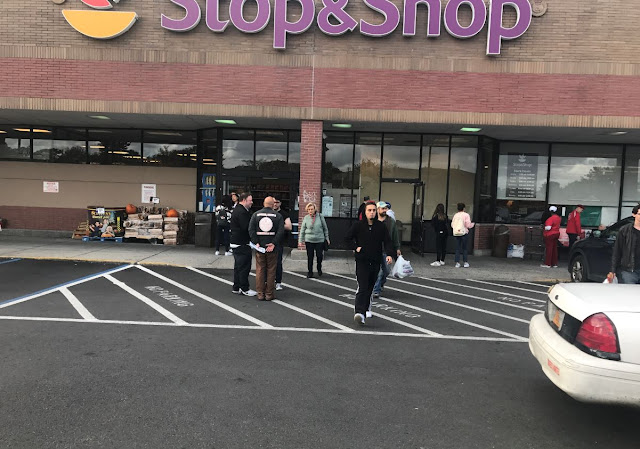 This was New York State Reform Party teamwork at its best. We rolled with the adversity and turned it into a great campaign day. Now it’s onward to victory November 7th. (You can see in one of the pictures that Paul Vallone himself is leading the effort to remove us from us in front of the Stop and Shop).

Vallone is a power abusing scumbag. And clearly a fascist if that isn't too hyperbolic

Vallone political mafia tactics! Typical SOP proceedure of la famiglia Di Vallone. They see their crookedly run territory being broken up by a truthful opponent. Time to pull those entitled lazy lard ass Vallones from their dynastic thrones. Don Paulo Vallone is a real estate industry lobbyist. His allegiance is with their retainer checks NOT the district he is supposedly representing. Want more of the same molestation? Then vote for Vallome. Want a REAL change in protecting your neighborhood investment? Then vote for Grazisno! Your fate is in your hands at the voting place!

I have seen the Vallone bullies and goons in action so many times. They are thugs. Anyone who has ever been intimidated by them must stand up and vote on November 7 for PAUL GRAZIANO!

Graziano's campaign people have rung my bell and I found them to be intelligent and very professional, they won me over and I hate what has become of my neighborhood under Vallone's watch. My vote is for Paul Graziano.

How can this site be so hypocritical. You crucified Melinda and Sliwa for being dirtbags when she was running for BP 4 years ago but now when he is supporting Queens Crap favorites, Paul and Bob, you think he is awesome. Wow, and you go after hypocrites all the time and now this site is acting like every other politico in town. WOW.

We need Paul Graziano working for us. However, I am afraid that there are too many sheeple who will just fill in the dots on their ballots with Democratic Party as their only thought. Good Luck, Paul! You more than deserve their votes. I pray that there are enough people who realize what you can do for them and the communities of the district!

I, too, am having trouble deciding between Malliotakis and Albanese. I'd like to give my vote to the one who has a better chance. After all of the latest corruption testimony about de Blasio from Rechnitz at the Norman Seabrook trial, I'm hoping that more people will wake up and dump the Dope from Park Slope. But will the majority of those people go for Nicole or Sal?

In CD19, there's no doubt - it has to be Paul Graziano. The future of our neighborhood is at stake, and we have to get the bald-headed thug out of office.

Hey we just posted a letter we received, didn't say we support Curtis. Furthermore, from 2016-present, Curtis has been featured on this blog discussing illegal conversions and taking part in Queenswide protests against BDB's homeless policies. You want to go back 4 years, be our guest, but things are no longer as they were 4 years ago.

Looks like they were in Bay Schmerace (Terrace)- sorry I missed it. Its a shame that Vallone has Retirement Precinct in his pocket. Go Graziano you've got my vote ! get these losers out that are destroying our community. I too am divided but leaning towards Nicole for the Mayorship but totally agree that we need to vote for either Nicole or Sal and get rid of the De Lousyio administration !

I'm not a resident. I live in Astoria in Peter Vallone's old district. I have to say Peter Vallone, Sr. was an excellent council member and that's why he was reelected time and again. He had a passion for good government and delivered for his constituents. I believe the problem with the sons is that they entered the family business without any passion to represent the people in their respective districts. Still, I think it would take more than a minor miracle to unseat Paul.

Vallone and the 109th precinct (AKA Corruption Central) are birds of a feather.

What is Vallone doing to close all the so called "Spas" in his district and the 109th?

Paul is a pathological liar...he tells the NY Post he has not endorsed DeBlasio when he clearly has and his father's lobbying firm has dumped lots of money for him in fundraisers... At least Peter Jr would never pull this kind of thing...Go Graziano...This just stinks...Paul of course is in the pocket of that whole Bay Terrace crew...he did this before...I saw it happen...got Dennis Saffran kicked out of their four years ago, and his wife, and his little band of teenager campaign staffers (ok they aren't teenagers but they act like it) made fun of and were disrespectful to his wife and family...so much for Vallone family values....Lionel put the Big Mac down

Arriverderci, Paulie! Methinks you’re going to have a lot more time to coach your kid’s soccer games. Your own parish doesn’t vote for you and people cringe when they see you in your PAV mobile. Have Daddy find you something else to do.

Pathological liar and megalomaniac -give it up already

Liar megalomaniac give it up

So now can’t post anything negative about the liar?

right.. I though so

"Hey Blog author- why not allow some dissenting voices? or are you in bed with Graziano- so to speak?"
I smell a troll !

You stupid shill, you are a Vallone soldier so who you are in bed with you lowlife?

Look at Patrick Jordan...anyone who is intimidated by that dope addict must be a real wimp...I really hope the Graziano folks can make a final GOTV push this weekend... the Queens Dem machine is going to be out in full force, but there is hope...God what is Vallone wearing

"Hey Blog author- why not allow some dissenting voices? or are you in bed with Graziano- so to speak?"

Calm Down Michael and Lionel

It seems that I'm supposed to sit by my computer all day and wait for comments to moderate? Unfortunately, I have a life and can't do that.

Should have called the NYPD and have them show you the permit mall police,what a joke.

Hey Vallone goombahs, try working for a living instead of kissing your boss' butt. Paulie V is an absentee councilman!

Really hoping Pauly likes coaching soccer as much as he says he does!

Sliwa has his own skeletons but I can easily brush that aside and move on if he's trying to be a decent person these days. Be honest, be tolerant, be good, it's not hard.

Graziano has my approval as it appears what he says aligns with what he does - I was able to corroborate his ensuring that the Bayrock property remained single-family, and apparently he authored the R2A zoning. That is really good in my book.

Warren Schreiber is a Vallone butt sniffer. Typical CB7 appointee
(Likely at Vallone's request) is just another bored mummy...another bobble head for machine politicos.
Kick Don Guappo Vallone's ass.
Graziano is the Payl we should all be voting for, not an entitled La Famiglia Di Vallone brat. AND he's the dumbest of the 3 Vallone siblings to boot!

Phony Valloney baloney!!!
In the real estate industry's pocket!
Graziano....owned by nobody!

Puhleez!
Warren Schreiber is an old suck up!
He thinks he's the king of Bayside.
I know of quite a few civic activists who used to work with Warren. They finally gave that up. Why? One said he think's his shit is sorbet. Another said that he really loves himself...all about him...pompous little fool.
Hmmm...perfect for CB7 and a Vallone footstool.

Vallone is feeling the heat - must have paid a king's ransom on getting that coverpage on one of the Queens weeklies.

Graziano has a really good chance. So many out there are disgusted with Vallone.

Stinky is owned by the real estate developers.
Graziano would be accountable to the people in the community. He owes no favors nor does he depend on dirty money, nor would he have a job on the side like Stinky does.

Time for a FULL TIME councilman! Tired of paying this guy 140K plus a year to do part time work.

I saw the cover of the Sun with the bald asshole on it. Talk about buying the press.

I'm pretty sure Curtis knows those in the photos are security guards. But when he took it out to the street, he could have had the NYPD called on him for approaching vehicles. That's what he's talking about.

Schrieber and Vallone. Perfect together. Schrieber turned the aviation roundtable into just another tentacle of the Queens bureaucracy. It's just the way he likes it. He gets a nice title, gets his name in the papers, but will never do ANYTHING beneficial at the roundtable or CB7. All he wants is status.