Suspension-busting pothole on Northern Blvd next to new bike lane 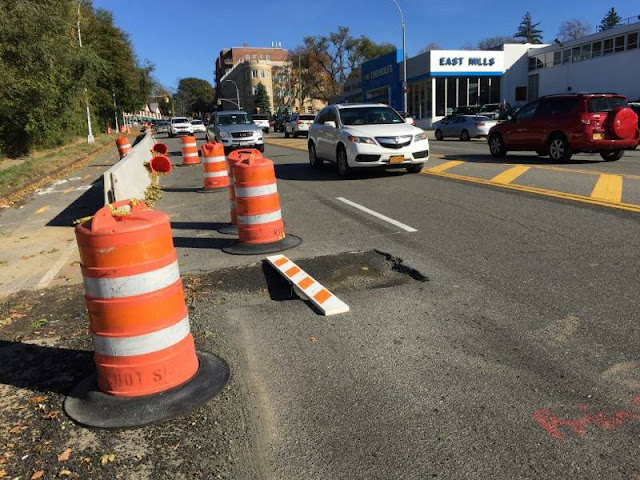 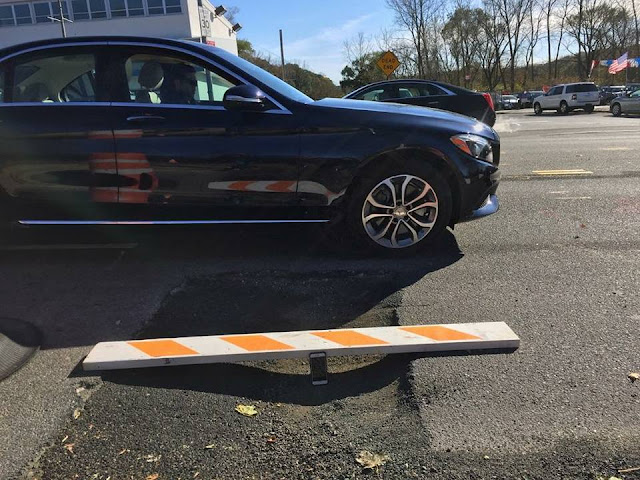 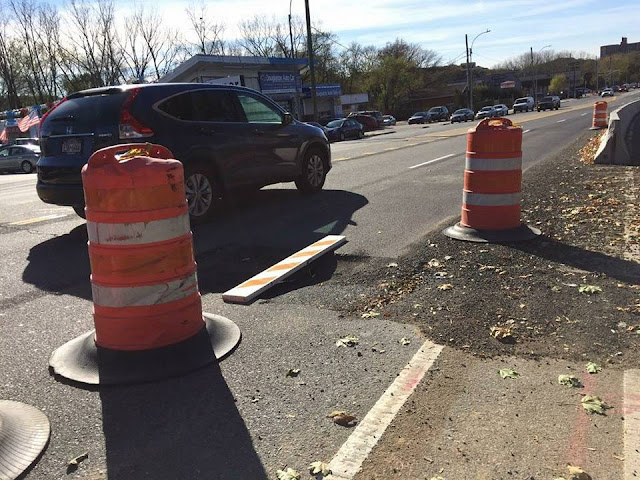 Well, somebody fucked up here. Because bikes are incapable of making potholes.

Let's see what bike enthusiasts, like those Lance Armstrong dressed bobos in the last video, say about this.

The bike lane should have been put on the sidewalk, there is plenty of room to make a dividing pedestrian and biking lane. Gateway in Broad Channel has one a mile long on Cross Bay Blvd.

BIKE LICENCING IS THE ANSWER.

Equal rights and responsibilities for all.

That is the "progressive" way to go into the future.

I don't know if licensing is warranted, after all, most people learn to ride a two wheeled bike when they are five years old.

Lights and reflectors should be required, and the laws should apply but the fees lower, for a lot of poor people still ride bikes and the majority of scofflaw riders are wannabe racers and stupid app delivery workers. With the latter two, fines can pile up easily against them.

Helmets aren'r really necessary and insurance is somewhat absurd, although bikers should be culpable when they cause a crash by running a light and a car stops short and gets it's rear bumper totaled when it's stops short in front of moving car behind it in such a scenario.

No doubt about the general arrogance of a collective of bike riders, I see it everyday being a long-time cyclist. These idiots,and the city planners, and probably Alicia Glen who runs the economic development organization and housing in city hall, sucking up to developers demands pushing these unnecessary and space hogging lanes are also to blame.

The westbound traffic on Northern Blvd. this morning was backed up almost as far as Leonard's of Great Neck.

Three lanes into one just before the Cross Island Parkway.

So....let us get this straight....with the rampant overdevelopment going on in NYC, instead of keeping pace with providing adequate transportation....we go for the quick cheap fix instead. "Let them ride bikes". AND "Let them eat cake" (Marie Antoinette's famous retort). Maybe in China bikes are big. This is supposed to be an "advanced and civilized" nation.
FUGGHETTABOUTIT and FU!

I don't know if licensing is warranted

Thats what happens when TOO many cars are FORCED into only two lanes on a busy street. This is only the beginning, you will see more. Just wait until winter arrives and the snow eats and salt from the trucks eat away at the pavement. Nice going DOT..... DUMMIES OF TRANSPORTATION!

The car haters want to create traffic congestion, just look at what they've done in Manhattan with all the bike lanes, barriers, trees planted in the streets. Wide multi-lane avenues have been turned into narrow roads, with traffic backing up for many many blocks. No more dedicated right or left turn lanes on most Manhattan streets, either. They now want to recreate this in the outer Boroughs. The car haters are clueless and indifferent to the car dependent life of millions of New Yorkers. They are extremists who either live in Manhattan or downtown Brooklyn.

3 LANES TO 1 LANE ON MONDAY MORNING? I saw 3 guys doing nothing at the construction spot, next to that large pothole pictured.

Who will dare to go into a bike lane when there is oncoming, downhill traffic going into the Cross Island?

Really it's the bicyclist fault for all the overcrowding,over development and massive amounts of traffic ?

Not really, the bikers just need to pay up like everyone else.
Driving is a privilege, not a right.
So lets apply the same logic to the bike/bikers.
The other issues you have mentioned is the stupid politicians' fault or are they really stupid?
No cars - Agenda 21 item, the Global Climate Change cult's wet dream.

Licensing, insurance, registration, road testing, everything anyone who utilizes public roads needs to do. I see potential for the city to rake it in on bicycle violations alone...

"Really it's the bicyclist fault for all the overcrowding,over development and massive amounts of traffic ?"

The other day I saw an Chinese lady collecting hub caps there.
Better pay than cans and bottles.

No...but many cyclists simply DO NOT follow traffic rules. I have seen people run down by cyclists and wound up in ERs. LICENSE THE DAMN CYCLISYS PLATES ON THEIR BIKES AND ALL WITH INSURANCE REQUIRED TOO! Enough already! FU if you disagree!

Cycle for the Collective

although bikers should be culpable when they cause a crash by running a light and a car stops short and gets it's rear bumper totaled when it's stops short in front of moving car behind it in such a scenario.

If a car stops short and gets hit from behind the driver in the rear is the culpable party. Period.

Someone should make these people wear helmets!
http://www.streetfilms.org/northern-boulevard-protected-bike-lane-celebration-ride/

if a car stops short and gets hit from behind the driver in the rear is the culpable party. Period.

Really. If some jerk runs the light or some derelict jumps in the way of an encroaching vehicle because of pure recklessness or a misconception of the right of way it's the fault of the driver behind him? I don't think would work that way if the object was a car running the light or stops sign. And you wrote period 3 times. One is enough

"Let them ride bikes". AND "Let them eat cake"---That is very fucking apt. Kinda like when de Faustio forced those bike lanes on Queens Blvd in Elmhurst against the community board's rejection of it. This is de Faustio and the D.O.T.'s solution to their vision zero plan.

I will point out again that I have been a bike commuter all my life and I am adamantly against these bike lanes. Apologies for any latent xenophobia, but this city is not some province in China, in fact that nation doesn't even have the room for their bikeshare program because they just leave bikes piled on the streets like garbage.

Licensing as is being promoting by the
"progressive" constituency is simply another imposed tax to burden the already heavily weighted tax payer. I'm going to burst. Please stop with this taxation!! Simply teach bike riding in a responsible and safe manner. Most will comply with the bike riding safety rules. There are always a small percentage that choose not to. They are the ones that now have tombstones that bear their name.

Does a bicycle not offer freedom of movement?

Please stop with this taxation!!

Bullshit. You want to use public roads?
Pay like everyone else.

"Does a bicycle not offer freedom of movement?"

No. A car does. A bicycle is for exercise. A car is for individual transportation.

Dinah Shore had it right:

On a highway, or a road along the levee
Performance is sweeter
Nothing can beat her
Life is completer in a Chevy

(Travelin' east, Travelin' west)
(Wherever you go Chevy service is best)
(Southward or north, near place or far)
(There's a Chevrolet dealer for your Chevrolet car)

So make a date today to see the USA
And see it in your Chevrolet!"

Listen to that inspiring anthem to the beloved automobile - and your American freedom - HERE.

PS And I speak from bicycling experience. There are 4 bikes right now sitting in my garage. One a Frejus with Campagnolo 15-speed gearing used on my decades ago cross-America trek.

PPS "Someone should make these people wear helmets!
http://www.streetfilms.org/northern-boulevard-protected-bike-lane-celebration-ride/"

Note not one pedestrian visible on the blatantly under-used sidewalks seen next to the new bike path in this linked video's imagery. "Helmets?" We don't need no stinking helmets. Hands off our heads! When, oh when, does this incremental governmental intrusion ever end?

Bicycles are NOT for transportation.

Yes bicycles also offer freedom of movement. But people who drive responsibly shouldn't have to be subjected to the bullshit that's been implemented in the last 15 years of incompetent traffic commissioners and oblivious hypocrite mayors who use motorcades.

G the A speaks volumes.