Vallone a bit testy over non-appearances 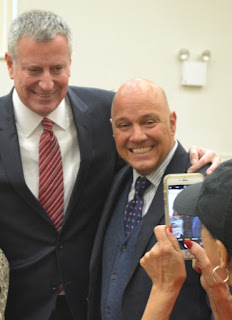 City Council candidate Paul Graziano, a well-known activist and city planner, bashed Vallone for not attending the event or several other candidates nights in the district, including one with the Bayside Historical Society and another with the Douglaston Civic Association. Vallone attended a candidates night at the Bay Club on Oct. 25, but Graziano argued that the event was not open to the public.

“That should speak volumes to the audience, that Paul Vallone is afraid to actually respond and face his own constituents,” he said.

A spokesman from Vallone’s campaign said he did not attend the We Love Whitestone event due to a medical emergency in his family, and issued a testy response to Graziano’s claims.

“Councilmember Vallone does not attend all candidates nights because he does not feel compelled to debate a career loser running on the Reform party line who he has defeated twice already in elections,” he said.

Candidates nights are a means of letting constituents hear your positions so they can make an informed decision when they go to vote. Depriving them of that opportunity and blaming your opponent for actually showing up isn't really all that smart.
Posted by Queens Crapper at 12:30 AM

First there was Il Duce.

Now we have Il Doofus.

On Staten Island James Oddo does not feel the need to attend candidate forums as he knows he is a shoe in for victory even when he plans on running for surragate court judge too. Oddo is very arrogant. Staten Island queens crap readers must vote 4 Tom Sherbenko on tuesday!!!!!!!

What an entitled scumbag.

He's not entitled to anything. Paul Graziano for Councilman District 19!

Pretty much all the incumbents think they've got this one in the bag. Boss Crowley is going to use his machine to deliver the necessary votes for District 19 will once again be in Vallone's hands. However, turnout will be low. If Graziano's voters are truly motivated, and if they really see how this campaign has been run, and the arrogance of this councilman, then maybe a miracle can happen. Being on the Reform Party line doesn't help because of people's automatic behavior, but REFORM is exactly what is needed...this city is in deep trouble....I live in the 19thand I have seen Paul V and his merry band in action up close (Lionel, Chang, Bree, his thug chief of staff, his drug addled campaign manager Patrick)...believe every word you have seen here...Paul Graziano is telling the truth about the petitions, and the story about the Taxis is true it happened four years ago too....It's all true

He seems pretty chummy with the Mayor, considering how Paulie Footballhead's campaign claims that he never endorsed de Blasio for re-election.

Look at the width of his ear-to-ear shit-eating grin in the photo. You try to replicate that on your own mug and you'll feel your facial muscles hurting. Go ahead give it a try.

He seems pretty chummy with the Mayor, considering how Paulie Footballhead's campaign claims that he never endorsed de Blasio for re-election.


No question that Vallone endorsed de Blasio for re-election:


Partial text from the endorsement:

NEW YORK – Numerous Queens based Congressmen, Assembly Members, Council Members, and local clubs today announced their endorsement of Bill de Blasio in his re-election campaign for New York City Mayor. Elected officials and local clubs have seen first hand all that the mayor has done for the residents of Queens. From seeing a drop in crime throughout Queens county, to increasing graduation rates for high schoolers, the Mayor has fought for Queens time and time again.


AND this is the funniest part:

2 arrogant politicians. They must look in the mirror everyday and laugh at the stupidity that is th nyc voter.

Get used to four more years of shit. If Vallone wins.....deep doo doo! If Graziano wins....the rest of the city council will stonewall him. NEVERTHELESS, my vote goes to Graziano!

I am voting for Paul Graziano because I think that he has integrity and is not being supported by the Developers. Paul Vallone has been given tens of thousands of dollars in donations by developers which I find quite sickening. I really respect Senator Tony Avella and he endorsed Paul Graziano in his bid for city councilman during the primary and therefore I know that Paul Graziano is the person for whom I should vote.

Graziano all the way! I know Vallone personally and he’s a nice guy but no way in hell he’d get my vote! Scandalous. We are doomed if he squeaks through.

Most of my family voted for Vallone in last election and even the primary. Biggest mistake. We’re all done with him. His tax response sealed the deal. 17 new people for Graziano this time around bun and all.

I know both candidates well and I have nothing nice to say about Paul Vallone or his useless, entitled and rude staff. Any time I have worked with Paul Graziano it has been productive and fruitful for the community. I don't care what line he is running with I would vote for Graziano under any party line. He will bring success to our community.

The mafia wins. Who the fuck do you think backs most politicians! The real estate industry , developers, building trades. Mamma Mia. Concrete pourers rule. Buck them and wind up in a skyscrapers foundation . LOL or with Jimmy Hoffa. Is it under Giant Stadium?