De Blasio not a developer's dream (but still pretty bad) 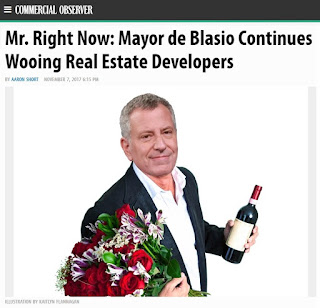 Gone are the grand visions of urban redevelopment that rose Athena-like from the City Hall bullpen under Mayor Michael Bloomberg. De Blasio has retained lofty language to describe his ideas—adding adjectives like “transcendent” and “historic” when presenting proposals. But his attempts to remake swaths of the city in a Bloombergian manner have sputtered.

Sunnyside Yards in Queens, where the mayor hopes to build an 11,000-unit affordable housing complex on top of a platform, is a years-long dream that may never be realized. His transit plans, including a $2.5 billion streetcar project along the Brooklyn-Queens waterfront and a new subway line through Utica Avenue, haven’t gotten past preliminary stages. And his administration has equivocated over the future of Willets Point, where the courts blocked plans to build a mall and 2,500 units of housing on the blighted site next to Citi Field.

Instead, de Blasio made affordable housing the centerpiece of his agenda and touted pro-tenant measures, including rent freezes for rent-stabilized units.

“The real estate community, like any other business sector, prefers certainty,” explained Ken Fisher, a Cozen O’Conner attorney and former councilman. “After four years of working with Bill de Blasio and his team, people have a pretty good idea of expectations. He has a strong preference for affordable housing, but the mayor has taken a very clear position that he’s for many different kinds of housing development, not just low-income housing.”

De Blasio made that clear in his 2015 State of the City address when he proclaimed that the other successes of his administration would be at risk if the city and developers didn’t build enough housing for residents of all income levels.
Posted by Queens Crapper at 12:15 AM

Never thought I'd say it but bring back Rudy Giulianni.
Last night while eating in a Penn Station area diner next to the window a crank smashed a window next to me and overturned a huge planter on the sidewalk. Diner employees grabbed her and the cops came quick. I would advise all not to be near the 8th Avenue Penn Station area. It is a hangout for all kinds of crazies. The homeless mentally ill street population has gotten dangerously out of hand. Thanks Bill Duh Blasio. Rudy's law and order regime stopped this. Now it's back to the 1970s shitty city mode.

Four more years of this corrupt asshole! Thanks alot liberals and NONVOTERS!

DeDumDum is in the same class as the snot from someone with a bad cold or the crust around some bum's unwashed butt. He is self-agrandized incompetent trash. Heaven have mercy on residents of NYC for the next four years, while this commie jerk lets the developers have their unfettered way with the city, stuffing their pockets as they stuff still more people into far too little space with far too little infrastructure. Along with more illegals ruining neighborhoods and driving up crime, protected by this fool, we can look forward to the further exodus of experienced teachers due to harassment from his senile harridan chancellor Farina, the further degradation of classroom atmosphere due to his letting students bring cell phones into class and practically forbidding any disciplinary measures being taken against disruptive students. This has turned, and will continue to turn, diplomas from NYC schools into so much worthless paper, with 78% of "graduates" having to take remedial classes in college. The streets are filthy and will become more so with more people and ignorant illegal invaders just recreating their filthy living conditions from back home. The markings delineating street lanes are often worn away, creating hazardous driving conditions, as do the many burnt out street lights which never seem to be replaced. The subway seems to break down daily but we have BIKE LANES!! Great for winter commutes, right? A regular Commie utopia, right out of this deranged moron's agenda.

That area around Penn is disgusting. There a methadone clinic near there and the McDonalds nearby is a no go zone.

Thanks Gary for the info.
Gonna start carrying a walking stick. "Speak softly but carry a big stick!" Teddy Roosevelt was right!

Time to weaponize... be prepared and when the vermin strike, strike back, show no mercy