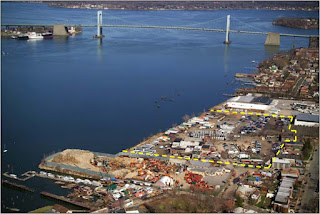 Great report by Ryan Brady in the Queens Chronicle:

In September, the Department of Environmental Conservation changed the brownfield cleanup program track for the Waterpointe development planned in Whitestone. A Track 2 residential cleanup was first planned for the site, where a single-family housing development is planned.

But after the agency discovered that material at the site used as fill did not meet the residential use soil cleanup objectives, it changed the project to Track 4 restricted residential use, a less stringent one. And though the DEC initially had said that single-family homes could no longer be built there, it reversed its stance after Community Board 7 protested.

The agency decided to stick with Track 4 restricted residential use when it reverted back to the single-family housing plan. And while the DEC told the Chronicle that the option is permitted when the homes are controlled by a common entity, as the Waterpointe ones are planned to be, Whitestone resident Robert LoScalzo believes that the agency cannot allow them to be built with that track.

As proof, he points to the sheet that the DEC sent CB 7 when it initially changed the brownfield cleanup and said that single-family homes could not be built. It said, “Restricted residential use provides for common ownership or a single owner/managing entity of the Site, however, single-family housing is prohibited.”

According to LoScalzo, allowing the one-family homes is “a bastardization of what they’re obligated to do under the regulation.”

To further back up his argument, the Whitestone resident pointed to a set of DEC regulations that became effective in 2006, which also says that restricted-residential use does not allow one-family homes.

The agency has also said that the Edgestone Group, the firm that owns the site, was responsible for the fill that led the track to be changed. LoScalzo wonders why the company was not punished at all for using it. “By virtue of dumping material there, they failed to comply with the standards for Track 2 cleanup,” he said. “Why are they so easily off the hook by DEC simply changing the cleanup to Track 4?”

We hear LoScalzo was present at Senator Avella's event yesterday at the Waterpointe site, and addressed the press separately afterward. Stay tuned for more because it looks like he's not done yet.
Posted by Queens Crapper at 6:24 AM

Brownfield cleanup? That is an unfortunate name.

"Brownfield cleanup? That is an unfortunate name."... The PC police thought it sounded less scary than toxic waste site.

Great picture. How much of that under water in next 10 years?

LOL! Ryan Brady "a great report"?
The guy's s wet behind the ears A hole. Let's get some really good reporters please!