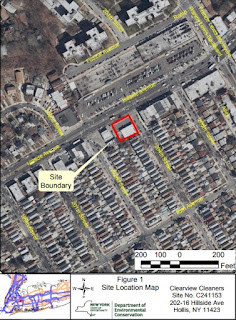 The state Department of Environment Conservation is seeking the public’s opinion on how a potentially contaminated plot of property in Hollis should be remedied.

The site, which is located at 202-16 Hillside Ave., was considered eligible for the New York Brownfield Cleanup Program, which was set up to mitigate sites with potentially harmful contaminant levels exceeding the threshold set up by the DEC. The program utilizes community feedback and oversight from the DEC and the state Department of Health to clean up spaces around the city efficiently without harming the quality of life. The Brownfield Cleanup Program services properties that are eyed for redevelopment.

To keep residents in the loop regarding the property, the state is asking that Hollis residents provide feedback on how the final plan of will be executed. Additionally, more in-depth dissection of the work being completed at the site can be collected at the Queens Library Hollis Branch, located at 202-05 Hillside Ave., or at Community Board 12’s office, located at 90-28 161st St. in Jamaica.
Posted by Queens Crapper at 6:55 AM

REALLY, you are asking Hollis/SE Queens residents on something as majorly important as this. Hell, if the people really cared that would not have allowed this crap to be placed here. BUT why stop there, so many places in Jamaica and SE Queens are contaminated and you can start with ROYAL WASTE and all the shady Auto body shops on Merrick Blvd.

Let's face it, the big Jamaica Now Action plan is to throw all the crap from everywhere else, especially the gentrifying parts of Brooklyn. I mean since all the crap, including people, homeless, etc have to go somewhere, why not make it the cesspool of Queens.

"Escape from Jamaica Queens" coming to a theatre soon.

In the meantime, that ghetto whinny bitch Ruben Wills (ROYAL WASTE was a campaign contributor), ex-councilmember of SE Queens, is crying for $10 million dollars for a sore ass he got while spending time in Riker's Island.