Someone's shown up a little late to the party 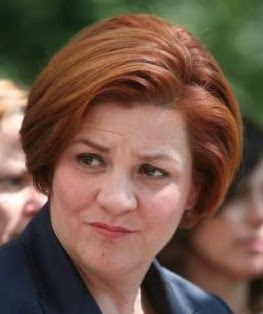 City Council Speaker Christine Quinn is moving Council staffers out of City Hall and into the disaster zone to help victims of superstorm Sandy, the Daily News has learned.

At least a dozen staffers are being sent into the devastated communities, with each staffer’s skills matched to the areas where they are needed most.

For example, Council finance staffer John Lisyanskiy, who speaks Russian, will be sent to Coney Island, where there are large numbers of Russian-speaking residents.

“Somebody else can take care of the finances for now,” she said.

Quinn is a likely candidate for mayor next year. Intended or not, such assistance will give her and the Council greater visibility.

Shouldn't this have been done the day after the storm, not 2 weeks later?

Someone has no shame.
Posted by Queens Crapper at 12:18 AM

History - the first time a tragedy (Bloomberg) the second time a farce (Quinn).

How politically expedient,
for one who hopes to make a mayoral run!

Clairol Chrissy is a phony as her red hair!

She'll score up some photo ops pretending to empathize with the stricken.

Actually, dear Crapper, I have known John Lisyansky for a few years and he has been helping out in Brighton Beach and Coney Island from the moment the storm hit, helping seniors in high-rise residences.

The announcement by Speaker Quinn gives John the ability to work full-time in Brighton Beach, rather than juggling time between the downtown office and the affected neighborhood.

I wish bloggers would do more research than just passing down other sources' stories.

Wow, so you know Christine Quinn's lackey! Where were Christine Quinn and her staff when people were being pulled out of rubble? How about when the looting started? Or when people were on TV crying that no one was coming to help them and they were freezing, desperate for food and water? Did she and her staff NOT see the same reports the rest of us did?

I wish commenters would pull their heads out of their asses before typing.

SK....who RU kidding?
You're a suck-up troll for the Bloomberg administration.

It's nice to see that Bloomie and his boys are following Queens Crap.