Now that's compassion for you 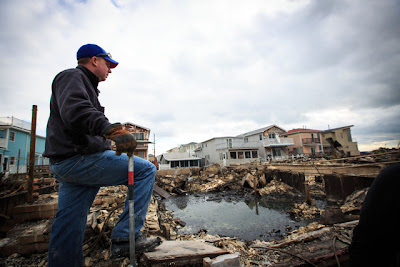 The city’s Department of Buildings has slapped violations on homeowners of condemned homes in Breezy Point that were destroyed during Hurricane Sandy, DNAinfo.com New York has learned.

Dozens of already shell-shocked homeowners trying to deal with the aftermath of the storm found tickets nailed to their crushed homes this week.

One violation cited “failure to maintain” the building, and the ticket's wording threatened “criminal prosecution” if the problem was not “immediately corrected.”

“It was shocking,” one homeowner said after finding the summons taped to a mangled storm door Friday.

“Here I am dealing with a house that's off its foundation, it is condemned, and I finally found a contractor with a bulldozer to push it to the curb so that it can be taken away by FEMA,” said the owner, who requested anonymity.

“And just as I am about to watch my house be carted away on the back of a trailer by FEMA forever, the contractor sees a white piece of paper tacked to it."

A spokesman for the Buildings Department told DNAinfo.com that the notices were simply a formality of the process, not intended as a notice of civil action.

"These violations were issued to document the damage that occurred and do not carry any monetary penalties for the property owner," said department spokesman Tony Sclafani.
Still, that offered little consolation for the homeowners left with nothing, after their homes were torn down, but the words on that piece of paper.

“I did not know what it was, and then I stood in the street, watching my house being taken away, and I am reading the paper and it is a summons for a building violation,” said the homeowner.

“What are they smoking down there?” he wondered about the Buildings workers.

The remedy, it says, is “Obtain all necessary permits for demo/repairs.”

Will fee for the permits be waived, at least?

New York City is moving to demolish hundreds of homes in the neighborhoods hit hardest by Hurricane Sandy, after a grim assessment of the storm-ravaged coast revealed that many structures were so damaged they pose a danger to public safety and other buildings nearby.

About 200 homes will be bulldozed in the coming days, almost all of them one- and two-family houses on Staten Island, in Queens and Brooklyn. That is in addition to 200 houses that are already partially or completely burned down, washed away or otherwise damaged; those sites will also be cleared.

The Buildings Department is still inspecting nearly 500 other damaged structures, some of which could also be razed, according to the commissioner, Robert L. LiMandri.

One challenge facing the department is reaching owners of the homes facing demolition. Many are now living elsewhere — with friends or family or in hotels or shelters — and are barred from entering the houses because they are unsafe.

The city is trying to proceed with sensitivity, with Buildings Department staff members walking the streets in these neighborhoods, trying to track down those affected through their friends and neighbors and urging them to go to one of the six recovery centers set up by the city and to register their damaged homes by calling 311.

But, in some cases, where the danger is imminent, the department will issue an emergency declaration to bulldoze the buildings, even if the owners have not been contacted.

“This is not easy, in this case, because of all these displaced people, but we’re going to do the best we can, but we may have to move on it if we can’t find them,” Mr. LiMandri said.
Posted by Queens Crapper at 12:27 AM

THe city sucks. The transit cops in rockaway are getting their balls broken because they are low on summonses.The train is not running and people are sffering but get the "numbers".........

Ran into a DOB inspector who was apparently on a break
smoking a cigar, dressed ike a slob, and looking 2 sheets to the wind, mumbling to himself. Wonder how many bribes he's taken over his career at DOB.

You've got to twist--no break--DOB's arm to get a violation slapped on the likes of a Tommy Huang!

Truth on Newtown Creek pollution is starting to trickle out.

Jimmy Van Bramer, the community is waiting for you to make a statement.

Now is not the time for a cover up to shadow over your budding career.

THe city sucks. The transit cops in rockaway are getting their balls broken because they are low on summonses.The train is not running and people are sffering but get the "numbers"

What is City Council doing beside being a quiet backdrop to Chrissy Quinn's antics?

Their loo-loos certainly trump any other concerns.

Your silence IS NOT golden Jimmy!

When I first heard violations were being issued I didn't believe it. The Department of Buildings is the ONLY city agency that gets to keep the $ from violations. . . the Dep't of Buildings is run by an MBA - who would not miss a money-making opportunity. Schmuck.